My mom told me that my sister and I showed no interest in building an altar or learning about the day's significance. When we seemed more excited about trick-or-treating, she decided to let us be.

I can't remember the last time I ate pan de muertos, the Mexican sweet roll baked to celebrate Dia de los Muertos. It may have been more than two decades. I wonder if I've eaten it at all.

I'm a Mexican immigrant who grew up in the Chicago suburbs. While my mom instilled a sense of pride in where I came from, it's been years since we've celebrated the Day of the Dead.

In 2017, Pixar's Coco exposed millions to the holiday's intricacies, offering an alternative view on death that is joyous and bright. I suspect there are also people like me—Mexican, but never fully immersed in the rites of passage—who were re-introduced to Dia de los Muertos by watching the film: cleaning the house to welcome spirits, celebrating with a loud, festive party, covering altars in cempasúchil, a flower similar to marigolds that light the path for deceased souls journeying home.

Growing up, I remember my grandmother telling me she was cooking for my abuelito, Pepe. But why? I asked. He's dead. I was about 10 years old. Her hands still moving, she explained that Dia de los Muertos is the one day of the year when he returns to us. And when he does, we want him to know that he has something to eat, so we prepare a special meal of his favorite foods. I can't remember what she cooked that day, but I remember the sound the glass Coke bottle made when she popped the top off and placed it on the altar.

Food is the heart of Dia de los Muertos. The sugar skulls, cookies, bread, and Coke bottles don't just complement the moment; they are the moment.

Delia Cosentino, an associate professor of Art History and Architecture at DePaul University who specializes in the visual culture of Mexico, explains that the indigenous, centuries-old tradition evolved to incorporate Catholic rituals as a result of Spain's colonial rule. The Aztec ceremony began as a festival paying homage to Mictecacihuatl, the goddess of death and ruler of the underworld. Today, the image used to represent her is La Catrina Calavera, a female skeleton dressed in a gown and wide-brimmed hat that wouldn't look out of place at the Royal Wedding.

The traditions of celebrating the dead include building an ofrenda—an altar on which to place photos, favorite foods, sugar skulls, and flowers—and picnicking at a loved one's grave.

"The particular food and drinks that might mark such an occasion will often vary depending on regional differences, as ritual celebrations are not homogenous across greater Mexico," says Cosentino. "Items like mole, pan de muertos, and atole often transcend more regionally-determined dishes often prepared for the dead, like tasajo from Chiapas or Mayan pibipollo of Campeche."

The three items Cosentino lists as superseding local food are corn-based. Most popular Mexican dishes, such as tamales, tortillas for tacos, and champurrado, are made with the masa derived from it. The ingredient highlights the ritual's indigenous origins, as traces of it could be found in Mexico well before the European invasion.

Pan de muerto is perhaps the most symbolic. Carlos Tzel, sous chef at Allegro Playacar in Playa del Carmen, Mexico, explains how the bubble mounds atop the round bread represent the bones of a loved one. The central piece is their head, and when viewed overhead, the raised dough pockets resemble the sign of the cross. In this way, indigenous traditions hid in plain sight and survived the Catholic conversion.

The recipe for the bread is simple: water—some chefs might use milk—flour, butter, sugar, orange flower water, and anise seeds. But the process is time-consuming. One loaf of bread requires six hours from start to finish. Once made, Tzel says that most families leave a loaf of the bread on the altar overnight for their deceased. The next morning, the family eats it for breakfast with hot chocolate or coffee.

I recently asked my mom why we stopped going to the Mexican museum to celebrate Day of the Dead. It was there that she would buy me a sugar skull—an item synonymous with the holiday. At six years old, I looked forward to my treat for two reasons: One, because it was made of raw sugar, and two, the vendor at the museum personalized it with an "X' for Ximena at no extra cost. It was one of the few times I had something uniquely my own. Keychains, pencils, and coffee mugs were made for Ashley, Sarah, and Lauren, not Ximena. But that wasn't the case in late October.

My mom told me that my sister and I showed no interest in building an altar, going to church, or learning about the day's historical significance. As a single mother, she was stressed about paying the bills, helping us grow fluent in our native tongue, and making sure we became U.S. citizens to avoid being separated through deportation. Getting us excited about Day of the Dead fell short on the priority list. When we showed more interest in trick-or-treating, she decided to let us be.

But she would build her own altar and commemorate the day by herself. I remember her ofrenda. It sat in the corner of her study, adjacent to her bedroom. The three-tiered shelf held black-and-white-turned-yellow photos of our family; candles that were tall, and tapered with curled-over, blackened wicks; trinkets like a rosary and worn bible.

To stem the inevitability of death, we must remember the vividness of life. The memories of people's laughs, smells, words. One of the things my abuelita Tere, who lives in Mexico City with my aunt, uncle, and cousins, always does when I FaceTime her from Chicago is ask whether I still eat guacamole every day. When I was in high school, I developed a guacamole obsession, so whenever she visisted, she would help me chop onions and tomatoes to make it.

My mom was right when she said I wasn't interested in Dia de los Muertos. Not because I was embarrassed of who I was or where I came from, but because I was raised in a predominantly white community in which there was no one to share the experience with. I understood I was part of two worlds, and I kept them separate.

It took the commercialization of Dia de Los Muertos—and the excitement of other people—for me to want to claim ownership of this part of me. But another factor played a role.

Last month, my grandfather died. Soon after, I had lunch with my mom in a spur-of-the-moment decision to leave work and visit her at home. I only gave her a twenty-minute heads up, but that was all she needed to round up my favorite foods: chicken mole enchiladas, quesadillas made with vegan cheese, my choice of a carmel apple or cherry pie. We took turns filling our glasses with apple cider. While we ate, I asked if this year she'd like to build an altar for her father.

Her mood shifted. She became lively. She began listing all the things we could make. She wanted to make sure we included items for her Mama Alta, her grandmother. She laughed as she began listing the items she wanted me to put on her altar when she dies, which was basically a replica of the meal we were eating. She stressed the importance of using dairy-free cheese to avoid stomach problems in the afterlife.

I can't imagine a day without my mother, but knowing I descend from a mystical line of ancestors who believe their loved ones never leave, makes the cyclical process of life, and death, easier to accept.

And the circle of life is exactly what the shape of pan de muertos represents, says Tzel, as I bite into the bread that brings back memories. 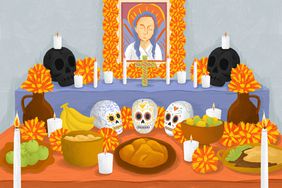