Antara Sinha is a New York-based food writer and editor who has been working in print and digital media since 2017. Her articles and recipes have appeared in Food & Wine, Bon Appétit, MyRecipes, MSN, Yahoo News, Real Simple, Allrecipes, and Southern Living. She is an associate cooking editor at Bon Appétit.

Fried sweets prepared and sharedwith loved ones are a mainstay of Phagwah, or Holi, a holiday celebrated by many in the South Asian diaspora and observed on March 28 and 29 this year. For Alica Ramkirpal-Senhouse, founder of the blog Alica's Pepperpot, documenting recipes of her family's Phagwah celebrations helps preserve traditions that continue to influence the lives of Indo-Caribbean immigrants and their descendants. Growing up in Queens in the '80s and '90s in an Indo-Guyanese community, the writer celebrated the holiday at her grand- mother Shelia's side, learning how to grate coconut while fretting over hot oil and frying sweets as her grandmother fielded phone calls from well-wishers.

"She would be in the kitchen for hours making gojas," Ramkirpal-Senhouse says. These Indo-Caribbean fried turnovers stuffed with warmly spiced sweetened coconut resemble Indian gujiya or ghughra; trays of Shelia's golden pastries were stuffed, deep-fried, and packaged as loved ones drove by to share sweets of their own and playfully smear colored powder called abir, a signature of the holiday's celebration, on one another's faces.

"Growing up, I knew I was Indian, but I knew that we were different," says Ramkirpal-Senhouse. "I knew it because of very visible things. We didn't speak the language— we would still watch Bollywood movies, but we always needed subtitles."

Much of Ramkirpal-Senhouse's experience growing up was in pursuit of a sense of origin. As Indo-Guyanese, with ancestors who labored on plantations in the Caribbean, she felt part of a community that is often left out of Indian diaspora narratives, which tend to focus on first- and second-generation Indian immigrants.

After the British slave trade was abolished in the early 19th century, indentured servants and workers were brought to the Caribbean to labor on British, Dutch, and French plantations. In 1838, the first ships from India arrived in Guyana, bringing a common thread in language and culture that evolved over generations. Even the name of the holiday, Phagwah, as many in the Indo-Caribbean community refer to it, comes from a regional language in the state of Bihar. As a result, Ramkirpal-Senhouse proudly represents a culture and generation that is uniquely Indian, Caribbean, and American.

"I know that there are a lot of South Asians who don't know about Indo-Caribbean history. I didn't, so how could I expect that of them?" she says. "Our ancestors came from such struggles and birthed this new culture."

She launched her blog 11 years ago as a lens through which to explore the origins of the food she grew up eat- ing, continuing the tradition of sharing her family's history by carefully testing and researching Indo-Caribbean recipes. Chicken curry, roti, and mithai—all distinctly different from their Indian counterparts—are among her favorites. The blog gives readers an accessible entry point into cooking and understanding the nuances of Indo-Caribbean food and is ultimately a way for her to hold onto identity in times of isolation.

While she may not make quite as many trays of gojas as her grandmother could, the fried sweets are still a treasured part of Ramkirpal-Senhouse's Phagwah celebration. Now, celebrating the holiday as an adult with a family of her own, frying and sharing gojas with her friends and neighbors is an homage to her heritage and a continuing promise to push the traditions and culture of her Indo-Caribbean-American story forward.

Get the Recipe: Guyanese Gojas (Fried Coconut Turnovers)
Was this page helpful?
Thanks for your feedback!
Tell us why!
Related Articles 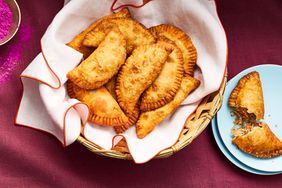