Heinz has brought back the Beanz Pizza after a nearly 20-year hiatus.

Earlier this year, the Donatos pizza chain commissioned a survey to determine what pizza toppings American pie-eaters loved and loathed. Our collective faves were mostly unsurprising with pepperoni, sausage, and onions finishing in the top three — and we were less enthusiastic about pizzas topped with anchovies, pineapple, and jalapeños.

But America's pizza palate hasn't been challenged by the frozen pie that has just reappeared in English supermarkets. For the first time since 2003, the Heinz Baked Beanz Pizza is back in stock, and yes, that's exactly what it sounds like: the frozen pie is topped with tomato sauce, mozzarella, cheddar, and a liberal helping of Heinz baked beans.

"Move over pepperoni, there's a new pizza topping in town," the @HeinzUK account posted on Instagram. The responses to the announcement were mixed, with some people celebrating the pizza's triumphant (?) return and others declaring this combo a crime against nature. "Omgggg thats a dreamm [sic]," one commenter replied, while The Guardian called the pizza "a genuine affront to God."

"We know there are some true fans of our frozen Beanz Pizzas out there and — after a 20-year hiatus from supermarkets — we hope they’re as happy today as we are to hear this absolute classic is available again in stores," Sophie Higgins, Heinz' Head of Growth Platform, said in a statement.

The pizzas are available at Iceland and The Food Warehouse supermarket chains, and retail for £3 ($3.60) each. One reporter from DevonLive attempted to determine whether that was a fair price for the pies by counting the number of beans on the one he purchased.

After some sauce-covered calculations, he determined that there were 54 beans on his pizza, which is roughly one sixth of the number of beans in a can of Heinz Beanz. (He suggested it might be a better value to empty a can of beans onto a margherita pizza — and that may be an option for Beanz-starved Americans who want to give this a go.)

Heinz UK has been busy putting its signature legumes into as many other foods as possible: In addition to the pizza, the company has recently released Beanz Burgerz, Beanz Bowlz, and Beanz-filled hash browns. "But we don't plan on stopping there," Higgins added. "Make sure to watch this space for even more exciting Beanzy news!"

Depending on how you feel about Beanz-adjacent items, that's either a solid promise or a terrifying threat. 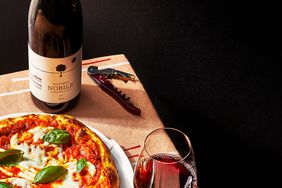