Forget 'Spanish Rice.' This Is the Mexican Rice Recipe You Should Be Cooking

In the land of corn, there is a dish where rice is king.

It's estimated that the country of Mexico consumes over 1 million and 100 thousand tons of rice per year. There is even a variety of long-grain rice known as Arroz de Morelos that has a denomination of origin protection status. All over the Mexican republic, you will find arroz served as a side in fluffy pilafs, sprinkled in chicken soups, used as a binder for albondigas, or used as the base for morisqueta, Mexico's unsung rice-bowl hero found in regions along the Pacific, but specifically Michoacán. Forget "Spanish rice." This is the Mexican rice recipe you should be cooking.

Rice arrived in Mexico via La Nao de La China (a.k.a. Manila Galleon), Spanish trading ships that brought goods from Asia to Mexico in the 1560s. People took to the new filling staple crop and treated it as another vehicle to deliver spicy stews (guisados) and beans. Cue morisqueta, which is essentially a taco in rice form: steamed rice topped with a saucy pork, beef, or seafood guisado, beans, some raw minced cabbage for texture, sour cream, and maybe a little salty dried cheese to round it all out. The dish is traditionally assembled and plated right before eating.

Morisqueta originated in the Tierra Caliente region of Mexico, which spans Michoacán, Guerrero, and the state of Mexico, and is known for its humid, intense heat and very low rainfall. The common thread between all variations of morisqueta is the layering of flavors and textures to create a filling good time of a meal.

In Los Angeles, the second-largest home to Mexican people outside of Mexico City, morisqueta is easier to find the closer you get to Orange County. In the southeast neighborhood of Bell Gardens, the restaurant El Zarape Michoacano offers a version topped with a spicy spare rib guisado in a salsa roja. The steamed rice is chewy and absorbs every bit of the spicy red salsa and crispy spare rib. In Santa Ana, Las Brisas de Apatzingán offers an option to have it topped with aporreadillo, an umami-filled guisado made with sun-dried beef. Both guisados include beans mixed in to provide extra heartiness.

For Paola Briseño González's simplified adaptation of the dish, she makes a guisado with tomatoes, smoked morita chiles, and bone-in flanken beef short ribs so that the sauce is extra rich and velvety. She also leaves a handful of husked tomatillos in the rice, so that you get a few mouthfuls of the tart, jam-like cooked tomatillos. The idea is that the tomatillo husks make the rice extra fluffy. While that claim is debatable, we like biting into the gently cooked tomatillo flavor bombs. Her morisqueta is layered into one pot, served family-style, which helps the rice further absorb the salsa.

When serving, hold back on garnishing the entire dish with cabbage and sour cream. We recommend garnishing per plate so that your leftovers can be easily reheated.

Of course, a pile of warm tortillas go really well with morisqueta. As do tostadas, because after all, you're in the land of corn.

Get the Recipe: Morisqueta con Costillas de Res en Salsa Roja
Was this page helpful?
Thanks for your feedback!
Tell us why!
Related Articles 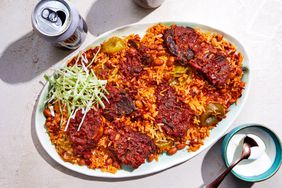