How the Japanese rice sprinkle took over the world.

Mari Uyehara was previously a senior editor at Saveur, Time Out New York, and Martha Stewart Living Radio, and her work has appeared in The Wall Street Journal, The Boston Globe, and Bon Appétit. Her column on American food in TASTE won a James Beard Award in 2019.

"My first cooking lesson was making furikake," says Sonoko Sakai, the Japanese-American cooking teacher and author of Japanese Home Cooking: Simple Meals, Authentic Flavors. Her grandmother, she recalls, asked her to coarsely grind toasted sesame seeds in a mortar and pestle. It was magical, she says. A sprinkle of just one ingredient could transform their onigiri, soba, or plain rice.

"As a young cook, that was a fundamental lesson," she continues. "You learn about flavors, texture, color, freshness. It's all in there and it's so simple."

The Japanese seasoning furikake, as most of us know it, is a supermarket condiment—an instant flavor booster, no culinary lessons required. It's a shake from the shelf. Most iconically, the Japanese company, JFC, sells an array of eight furikakes in shakeable jars with pictures of each seasoning coating a ball of rice atop chopsticks on the label. Different colors in a wave atop the label denote each flavor: orange for noritamago (seaweed and egg); pink for katsuofumi (shaved bonito, sesame seeds, and seaweed); green for wasabi fumi (wasami, bonito, mustard plant); and so on. But it wasn't always so.

Furikake actually started out as a nutritional supplement. In food history lore, Suekichi Yoshimaru, a pharmacist in Kumamoto, first came up with the idea of furikake during the Taisho period (1912-1926) as a medicinal additive. "In Japan, we had deficiency issues from eating too much white rice," says Sakai. "Refined white food, especially rice, milled everything away—the bran, the germ—taking the nutritional nourishments away." To address those deficiencies, Yoshimaru ground mixture of fish bones, sesame and poppy seeds, and seaweed, which he dubbed gohan no tomo, or "a friend for rice," and sold to a food company to sell commercially in small flasks. With minerals and nutrients, like calcium, zinc, and amino acids, Yoshimaru's "a friend of rice" was a real-food nutritional supplement (vitamin pills were also developed in the same period) albeit much tastier.

During World War I, the packable nutritional sprinkle was rationed along with rice to soldiers. In 1948, the great Taiwanese-Japanese inventor, Momofuku Ando became deeply concerned about malnourishment, according to The Untold History of Ramen: How Political Crisis in Japan Spawned a Global Food Craze by George Solt. Kicking off the mass production of furikake, Ando opened a factory manufacturing furikake from dried fish flakes, made from leftover fish parts, marketed as a source of protein and calcium from his company Nissin. (Ten years later, he famously developed instant ramen Cup Noodles, launching an entire food category.) And by 1955, furikake was showing up in the United States, first in advertisements for furikake nori in the Hawaii Tribune-Herald, and, not long after in the mainland too, as early as 1961, with Centennial Food Imports advertising nori furikake and noritama (seaweed and dried egg) furikake in the Austin American-Statesman. In Japan, furikake grew to a 51 billion yen industry by 2013. Beyond rice bowls, onigiri, and noodles, furikake has made its way into Hawaiian poke and popcorn, and onto restaurant menus.

Somewhat ironically—or inevitably—furikake, which started out as a nutritive corrective to rice processed to remove its nutritional ingredients, fell victim to industrialization itself. "It has evolved from a food into a chemical," says Sakai. "There's very few that are pure ingredients. Even the sesame seeds, gomasio, are seasoned with MSG. It bothers me. Why can't you just take salt and sesame seeds, and leave them alone?" Sakai likes to make her own: those coarsely ground sesame seeds, crumbles of yukari (dried red shiso), or big pinches of the refreshing jade-hued aonori on okonomiyaki or noodles. "If you make dashi, you end up with spent kombu and bonito flakes and shiitake mushrooms," says Sakai. "You can dehydrate them, chop them up, and season with some soy sauce, and you have a repurposed furikake."

Some small companies are starting to produce furikake themselves. Trader Joe's launched its own store-brand furikake (with just dried nori seaweed, black sesame seeds, white sesame seeds, salt, and kelp powder) in 2020. The organic brand Eden Foods makes a gomasio with just sesame seeds, seaweed, and salt. And the Alaskan brand Barnacle Foods makes its own furikake highlighting Alaskan kelp, along with other flavorings like bonito flakes and raw sugar. Greg Arnold, the Japanese-American skateboarder-chef behind Los Angeles condiments company Dark Horse Organic, grew up eating store-bought JFC brand furikake as a kid, but got back to furikake's medicinal roots with his own vegan version, with a California wellness twist. "Pine pollen is amazing for energy and focus, and bee pollen is an amazing adaptogen," says Arnold. "The nuttiness from the seeds and the sea flavor from the nori, it just comes together like a symphonic work: a little sweet, a little sour, a little earthy."

"Furikake mostly applies to dried crunchy toppings, but it can be slightly moist," says Sakai, noting a curry soybean furikake she recently sampled. There are practically as many furikakes as there are ingredient combinations: yuzu, dried shrimp, hijiki, and natto (fermented soy beans), and even strawberries, butter chips, and other more novel flavors. In Japan, an annual Furikake Grand Prix, with dozens of entrants from 14 prefectures, judges an annual best rice seasoning, with winners like Furikake King's Ika kombu (squid and kelp) and ume chirimen (plum and dried young sardines). Even crunchy bacon bits, says Sakai, forgetting her aversion to industrial ingredients for a minute, could be furikake.

"Furikake just means sprinkle," says Sakai. "You can use it as a noun or a verb. Anything can become a furikake." 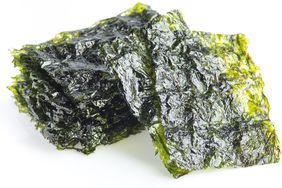 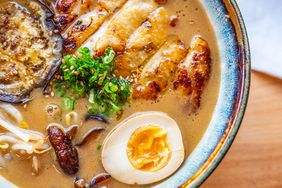 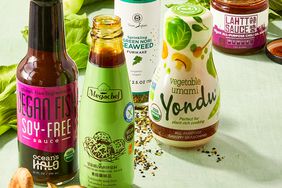 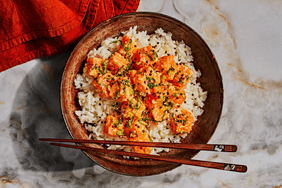