Tons of big brands offer weird flavors to try and drive sales, especially around the holidays. We all understand that. But there’s just too much strangeness going on in this recent spotting, published by The Impulsive Buy, of Hot Diggity Dog Pringles – hot dog-flavored chips being touted as an exclusive flavor at Walgreens “while supplies last.”

It’s not that hot dog-flavored chips haven’t been done before. In fact, it’s quite the opposite: Hot dog hasn’t really proven itself as the kind of “exclusive flavor” people clamor for. Do you really want someone covering your potato chips with the same spices used to mask the flavors of mystery meats? 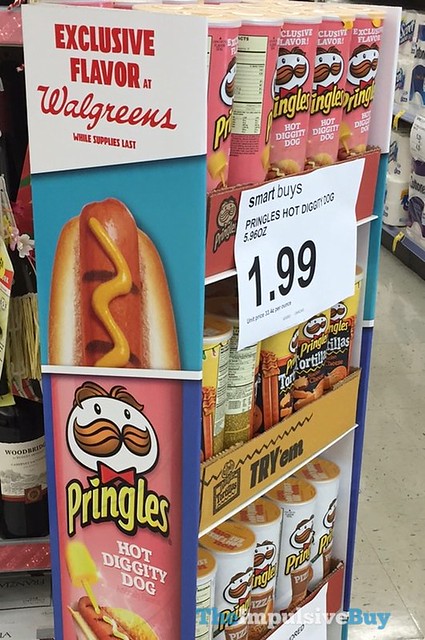 But as Consumerist points out, probably the oddest part of this product being seen now is that it’s the middle of winter. Hot dogs typically conjure up thoughts of firing up the grill for summer barbecues and baseball games. You don’t leave Santa Claus a plate of milk and hot dogs.

If I do find myself eating a hot dog in December, it’s typically a last resort spawned entirely out of laziness and hunger – which, actually, is probably the exact market Walgreens is going after. It’s not like many people are going into Walgreens intending to buy Pringles. Maybe this makes far more sense than I’m giving it credit for.

Related: The Definitive Ranking of Every Kettle Chip
A Bright Green Potato Chip Found in a Bag of Lays Explained
7 Craziest Whiskey Flavors You Can Buy

Hot Dog Pringles Are Exactly the Exclusive Flavor of Potato Chip You Don’t Want in the Winter
this link is to an external site that may or may not meet accessibility guidelines.