Everything You Need to Know About Cold Climate Wines

When wine lovers talk about cold- climate wines, more often than not they’re referring to areas of the world where grapes are grown, but the temperatures are chillier than in the sunny, balmy climes of Napa Valley, California, or Mendoza, Argentina. Think places like the cool and wet Champagne region of France, or the fabled Riesling territory of the Mosel in Germany, and you’ll get the general picture.

There are, however, wine-growing environments that go well beyond the chilliness experienced regularly by those “cooler climate” regions. So much so, in fact, that they make the vineyard challenges of areas such as Champagne and the Mosel look like minor annoyances in comparison.

While it’s not generally common knowledge among wine drinkers, fine wine grapes are grown in some of the most extreme – and extremely chilly – farming areas available to human beings. Here are some of the world’s hardcore wine regions, the ones that really put the “cold” in “cold climate.” Grab a glass of your favorite cooler- region wine, don a sweater, and take a virtual trip with us to the wine world’s chilly extremities.

Central Otago is the wine world’s answer to the famous limbo question, “How low can you go?” Technically, this South Island New Zealand wine region is the world’s southernmost spot for growing wine grapes (your next options are the Southern Ocean, and Antarctica, and no -one is vying to try planting vineyards in those spots any time soon).

The area is famous for having been gold rush territory in the 1800s, and for providing some of the beautifully rugged landscapes featured in The Lord of the Rings movie trilogy, but it’s also become famous for producing world-class Pinot Noir. The climate here is as dramatic as the scenery – this is one of New Zealand’s coldest and driest regions, and can experience temperatures between 38 degrees Celsius and -21 degrees Celsius.

While the winters in Central Otago can be bitterly cold, its mountainous terrain and vineyard elevations help to protect its grapes from the more extreme climatic events (though frost is still a common farming threat). As a result, other hardy grape varieties also thrive here, including the white wine grapes Chardonnay, Sauvignon Blanc, Riesling, Pinot Gris, and Gewürztraminer. 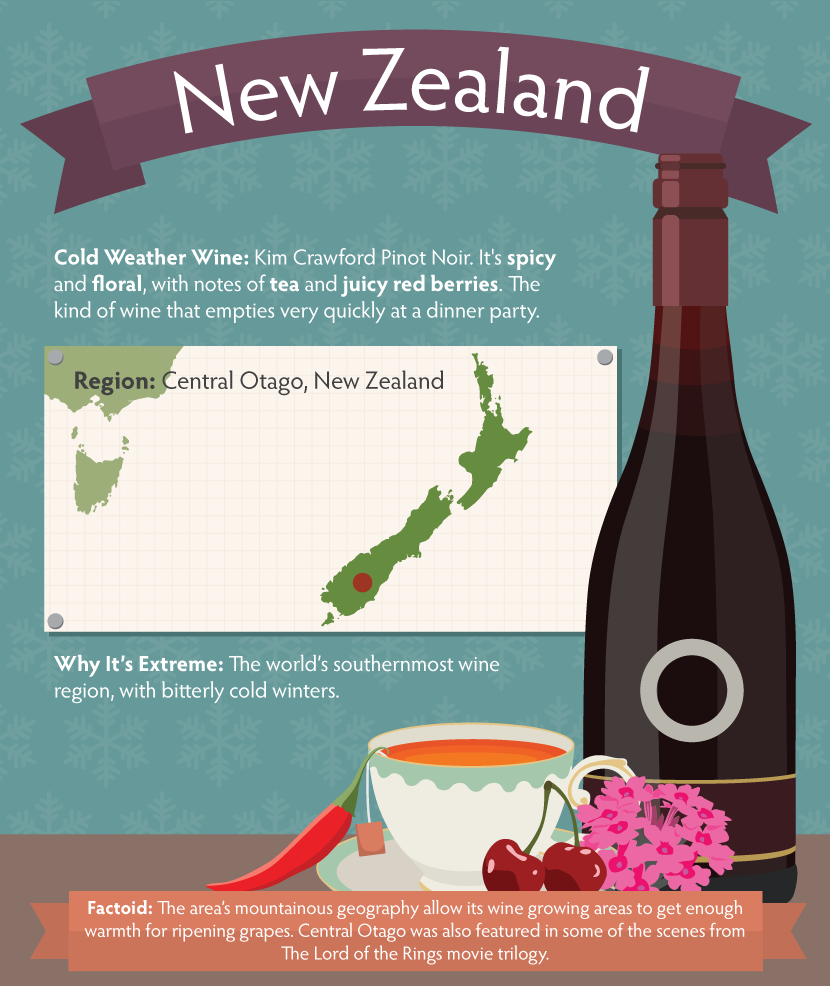 Of course, if the wine world has an extreme southern point, it also has its extreme northern point, which can be found in the picturesque area of Telemark, Norway. It’s there that you can find the Lerkekåsa vineyard, located near Lake Norsjø. Lerkekåsa is technically the world’s northernmost vine planting area, as of 2015. Just how far north are those vines? Let’s put it this way: until recently, Telemark was probably most famous as the birthplace of free-heel skiing. Its vines happen to share the same latitude with some of the chillier places on the planet, including Siberia, southern Greenland, and Alaska.

At this extreme, few fine-wine grapes do well, however but this region has had success with Solaris, a hearty white wine variety developed from vine crossings in Germany. It also happens to be a gloriously beautiful spot, and luckily you can stay there – at Lerkekåsa vineyard, they, which also provide accommodation services.

The words “penguin” and “fine wine” don’t normally come together in the same sentence (unless maybe you’re dining during a very desperate and ill-fated Antarctic sea voyage), but thesethose two things can both be found in the southern Argentine region of Patagonia.

The land of migrating Magellan Penguins is also a land of some serious vinous variety, growing a diverse selection of wine grapes, including Chenin Blanc and Torrontés for whites, and Malbec, Merlot, Syrah, Pinot Noir, Cabernet Sauvignon, and Bonarda for reds. This area is located about 400 miles from Argentina’s wine epicenter, Mendoza, but shares some of Mendoza’s characteristics as a high desert.

Temperature extremes are the norm in Patagonia, and the area sees some of South America’s warmest and coldest temperatures. The grapes have a nice, lengthy ripening period there, resulting in wines with intense aromas, fruitiness, and structure.

It’s small, and it’s not the world’s coldest vine growing area, but the Ahr (located near a tributary of the Rhine River in Germany) has the unique designation of being the most northern wine region planted primarily with red wine grapes (which account for more than 85 percent of its vineyard area).

Interestingly, it’s believed that the region’s wine potential was identified as far back as Roman times, so its northerly climes haven’t seemed to ever have deterred the winemaking business. This is kind of odd when you consider that the Ahr shares the 51st parallel north with areas such as England and Mongolia.

While several grapes are grown in the Ahr, the majority of the region is planted with Spätburgunder (better known as Pinot Noir), which does well here thanks to the protection of the Eifel Mountains and the resulting warmer microclimates in which the vineyards are planted. Up until the late 1980s, the region produced Pinot Noir wine that had more in common with sweet rosé than with the dry red wine that you might think of when you conjure up visions of Pinot in your mind’s eye. Now, the regional Ahr style is dominated by more robust, structured reds, with prominent oak spice aromas.

The Niagara area of Canada is known for producing ice hockey players, but it’s also justifiably famous among wine lovers for producing something else: icewine. What makes this region extreme is the fact that this style of wine, which requires grapes to be frozen on the vine, can be produced naturally there.

Icewine in the region is made primarily from thick-skinned Vidal grapes that are picked when temperatures in the vineyards are between -10 and -12 degrees Celsius, which usually happens in the wee hours of the night, making for some extremely chilly harvesting scenarios. The resulting wine is expensive to make, but packs concentrated punches of intense floral aromas and pure fruity sweetness.

In terms of dry wines, Niagara is dominated by Riesling, Pinot Noir, and Chardonnay. However, thanks to its geological history, a wide variety of grapes are planted there, including Vidal, Cabernet Sauvignon, and Cabernet Franc. We can thank ancient glaciers for that: they once covered the area, and in their retreat left behind complex soil deposits, which is one of the reasons that the region can grow so many different grape varieties well. 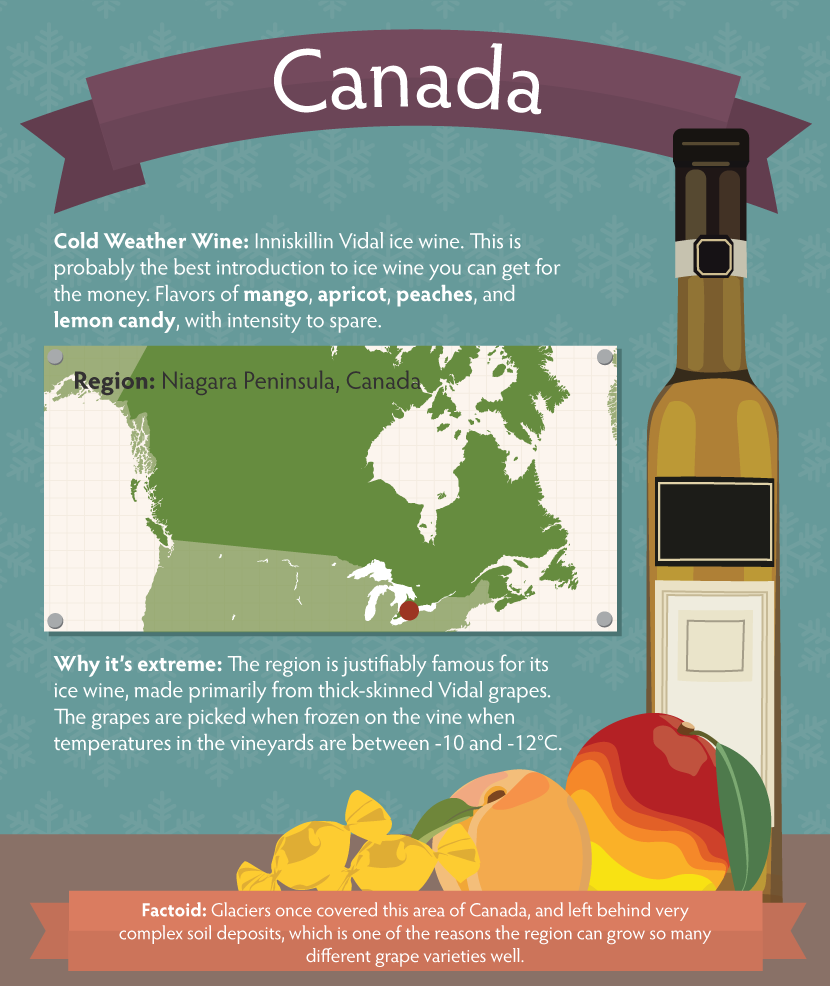 Cold weather can be dark and gloomy at times, and easy to get lost, dreaming of a summery sangria. But as we've just learned, cooler climates are able to produce some amazing wine! So cozy up by the fire and enjoy a glass from a chilly extreme!

Related: Starting a CSA
Guide to Grass-Fed Beef
Buying In to Buying Local

Everything You Need to Know About Cold Climate Wines
this link is to an external site that may or may not meet accessibility guidelines.