Rasul Abd'al-aquil is back in the dish pit at Southern Belle and he can finally breathe. Along with millions of hospitality workers across the country, he was furloughed from his position for a grueling five weeks as COVID-19 shuttered restaurants across the country. And to add insult to grievous financial injury, the father of two couldn't get through to Georgia's unemployment department on the phone. "All the lines are busy and I can't get into the system. That's the hardest part of trying to maintain and stay afloat, when you're not getting what you're supposed to be getting," he said on a recent phone call with Food & Wine.

But the cash wasn't all that was absent from Abd'al-aquil's life. The self-proclaimed "best dishwasher in Atlanta" finds his purpose, pleasure, and sanity in the furious pace of the kitchen, and the break was taking a toll on his soul. "I'm a high-energy guy and I missed being useful with my energy," he said. And if you ask anyone in hospitality about who is the most useful person in a restaurant—and who has the toughest job—there's an excellent chance that before you finish the sentence, they'll say it's the dishwasher.

People don't realize there's a person back there whose sole job it is to clean those glasses and make sure they're out there for you, crystal clear.

"If we have a full staff and one of my waiters gets mad and leaves, it's bad but we can figure it out. If the dishwasher leaves, we can't continue," John Winterman, co-owner of the upcoming restaurant Francie in Brooklyn said on a recent Communal Table podcast. "Nobody has enough product where they can just endlessly pull out glassware, silverware, plates, et cetera. Everything has to be recycled, reused, and cleaned in between. Somebody has to do it. People don't realize there's a person back there whose sole job it is to clean those glasses and make sure they're crystal clear. Generally, they're going to be the lower paid people, but if you're smart, you don't pay them super low. You want to try to give them a living wage and make sure you're able to keep them. Otherwise you're in the cycle of new people, new faces, paperwork, and training. They tend to be the lower side of the scale, for sure—and they tend to be immigrants."

It's a thankless, steamy, wet job.

Like many chefs, Rob Newton got his start in restaurants as a dishwasher. At the age of 16, he labored in the dish pit of an Arkansas barbecue restaurant earning minimum wage ($3.25 an hour at the time). Now an executive chef at Grey & Dudley in Nashville, TN, he feels a visceral pinch and panic if a dishwasher calls out sick because he knows how vital that position is to the rhythm of a kitchen. "It's a thankless, steamy, wet job," Newton told Food & Wine, "and if they go down, everything crashes."

There's a lot of pressure in that position and it's often the most underpaid.

Sam Fore, owner of Tuk Tuk Sri Lankan Bites in Lexington, KY, agreed enthusiastically with Newton's assessment. "The dishwasher gets all the crap, essentially. You can end up with horribly scorched pans or plates full of food. If you get behind, the entire restaurant can get behind," she said. "There's a lot of pressure in that position and it's often the most underpaid. If you don't have a dishwasher, everything can break down so easily."

Consider what "everything" entails. If the cooks on the line don't have pots, pans, and utensils to work with, they're totally hamstrung as tickets back up. If there are no clean plates, bowls, flatware, or other service ware, diners can't be expected to slurp soup off the tabletop and mash potatoes into their mouths with their bare hands. If the kitchen isn't cleaned at the end of service, the mess isn't going to magically disappear overnight so prep can start fresh in the morning. Even with the recent national shift to takeout and delivery, and especially with a stripped-down staff as restaurants operate at partial capacity, a kitchen needs to function more efficiently than ever.

That's where a highly-skilled dishwasher like Abd'al-aquil shines. Over the past five years, he's refined his system to the point where he can step into any restaurant, get the lay of the land, and almost immediately impose order. "Everybody says the same thing. They'd be like, man, you wouldn't even notice it's your first day."

For him, it's as much of a mental endeavor as it is a physical one, and the former forklift operator and aspiring artist finds that his particular brain is uniquely suited to the task. "I'm a detail-oriented person and a neat freak, and I have OCD," he explained. "I was tired of the respiratory problems at my old job and I wanted to try something new. I was just passing through and I saw how messy it was, and I had to start doing it. You get your privacy, no one is standing over you, you get to work at your own pace, and you get a lot done."

So does everyone else in Abd'al-aquil's kingdom, because they know if they follow his organizational system, everything will go smoothly. If not, they'll soon realize the error of their ways. "I am an alpha male, and you have to be like that to work dish. If you don't, you will get abused, mistreated, and people will just do you all kind of ways," he said, noting that he isn't running up against that issue currently, but encountered initial pushback at previous jobs.

"If you don't tell them, they don't know and they're gonna look for the easiest way out. I decided, show them how this is how it's done. If they don't follow along, we may have a couple of words, but it's not going to go any further than that. It's a heated moment thing, when everybody's super busy, you're getting hot, you sweat, and everything's on the rise," Abd'al-aquil said. "But they all know it's just work, it's not going to leave here. You want everybody to be on the same page so you push everybody to be a team."

When things are going according to plan, Abd'al-aquil essentially operates as his own team. "People will tell you, 'Rasul is two people,' and they're right. I let my eyes and my ears both play a position," he said. "I keep everything in front of me and I don't let anything get behind me cause if they get behind me, that means I'm behind. As long as I have everything in front of me and everything has a place where it goes, we'll get it done."

And by "done," Abd'al-aquil means shutting down Southern Belle in a timely fashion so he can get home to his wife and kids—a ritual sorely absent during those weeks away from work. "I was going crazy. I need to be active, and I didn't have a chance to miss my family. I love that moment after working nine or ten hours where I can come home and see them." Knowing how much that interaction means to him, Abd'al-aquil has made it his mission at every job to ensure that everyone he works with gets to have a life outside the restaurant. In his previous position at a major chain restaurant in Atlanta, he was shocked to find that the clean-up crew didn't wrap up until 3:30 or 4 in the morning. Within a week, he streamlined everything to have everyone out the door by 1 a.m., then 12:30, then 11:45. Everyone loves working with Rasul, he says, and he loves them right back.

By his third day at work after the governor of Georgia eased social distancing restrictions and allowed restaurants to reopen, Abd'al-aquil said he was adjusting to Southern Belle's new mode of operation—offering takeout and delivery only—and was by his estimation "about 85% back in the swing of things" and closing in fast on 100%.

"It's really, really, really hard work and it takes a strong mind to do this job," he said. "There may be five or eight cooks, but back here, it's just me. I trust my system, and that makes life easier for everyone, and then we all get to go home on time." Maybe with all that extra time to spare, he can finally get the state unemployment office to cut through their own mess, pick up the phone, and give him what he's owed. 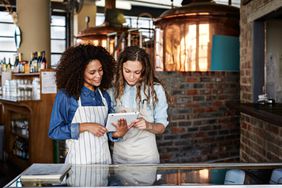