Seeking a Wine for the End of the World: Restaurants Sell Their Collections

Restaurateurs and sommeliers around the U.S. are unloading their wine as they try to stay afloat.

On Saturday afternoon, Nisha Chittal left her Brooklyn apartment to line up for the cellar sale at sommelier-winemaker-restaurateur Joe Campanale’s regional Italian spot Fausto. She had planned to make two stops, one at Fausto and a second at Campanale’s neighborhood wine bar LaLou. But the (socially distanced) line at Fausto was so long, about an hour's wait to get into the restaurant, and she didn’t have time to hit both spots. “There must have been 50 people in line at any given time,” Chittal says. “It wrapped around the block.”

She left with a bottle of Lambrusco, a Montepulciano made by Campanale, and a hard-to-get rosé from esteemed Burgundian winemaker Pierre Yves Colin Morey. “I was really excited to get that one at such a discount,” she says.

The entire restaurant industry—the second-largest private employer in the U.S. with a staggering 15.6 million workers—has essentially been shut down due to COVID-19. Restaurateurs and sommeliers like Campanale are fighting to stay afloat.

He and many other sommeliers across the United States have taken to selling off their highly curated cellars in an attempt to make payroll, keep some staff employed, or just pay rent. And customers like Chittal have been offering support by picking up rare, often allocated bottles that are normally impossible to get one’s hands on—for the fraction of the normal price.

In New York City alone, the epicenter of the COVID-19 crisis in the United States with about 5% of cases throughout the world, acclaimed wine bars including Four Horseman and Compagnie des Vins Surnaturel have been strategically selling off some of their stock. Wine director Christine Wright has even opened up a wine window at Hearth.

Charlie Bird is selling Shameless Plug bundles of wines made by their sommelier friends for $150 with all profits going to the Independent Restaurant Coalition's efforts to save local restaurants affected by COVID-19.

Read more: 29 Amazing Things You Can Buy from Chefs' Walk-Ins and Wine Cellars

Emmett Burke, owner of Greenwich Village Chicago-style pizzeria Emmett’s, has taken to selling some of his old Barolos as well as cult Burgundies and Napa Cabs like bottles from the super allocated Harlan Estate.

“We've sold quite a few of these so far, and the customer feedback has been quite impressive,” James says. “For each option, the guests not only receive a delicious bottle but also custom tasting notes that I write so they learn a little bit too and get to know the stories behind the bottle.”

But this is not just happening in New York City, one of the cities ordered to stay at home. All over the country, restaurateurs and sommeliers are making tough decisions as they try to avoid complete financial catastrophe.

Restaurants are already struggling, but the National Restaurant Agency has estimated that over the next three months sales will drop $225 billion, and five to seven million hospitality jobs will be lost.

In Silicon Valley, three-Michelin-star Manresa has opened up its entire wine list for retail purchases. Wine Director Jim Rollston has been seeing collectors jump at the opportunity to add these rare bottles to their cellars.

Auction houses, like Zachys Wine Auctions, have been buying rare bottles from restaurant collections, offering advances and other incentives for liquidity. But high auction house fees and the risk of a low hammer price are too great for many of these restaurateurs who are scrambling for as much cash as they can get to keep going. “I haven’t looked to take my wines to auction in awhile, because, frankly, selling them direct-to-consumer is more lucrative if you have the clientele,” says master sommelier Christopher Bates, owner of F.L.X. Hospitality in New York’s Finger Lakes wine region.

Bates is a highly respected somm who was named Best Young Sommelier in the World in 2012, won TopSomm in 2013, and was a Food & Wine Sommelier of the Year in 2016. His incredibly impressive wines are all up for sale via Instagram and soon their website. That includes bottles of Krug Champagne, eight highly coveted Domaine de la Romanee Conti priced between $1650 and $15700, as well as 12 vintage verticals of cult Napa Grenache and Syrah Sine Qua Non Estate Vineyard—which boasts a ten-year-plus waitlist to get a chance to buy it—starting with 2003.

Though these collectors’ fire sales are helping to get the rent and utilities paid for now, sommeliers are not only heartbroken to part with their curated selections, they worry what it will mean for their restaurants when they do reopen.

After creating dynamic wine lists for top chefs like Melissa Perello at Michelin-starred Octavia and Frances in San Francisco, Joshua Thomas moved back to San Antonio, Texas, in 2018 to open Maverick Texas Brasserie. To build up a list like the ones he designed in the Bay Area, Thomas had to get creative to find certain wines in Texas, direct-importing many of his rarer selections, like La Closerie Champagne and older D’Angerville from Burgundy.

He knows he needs to keep some of these blue-chip selections on-hand for customers when the restaurant finally does open back up. “Some of these wines took me a year and a half to acquire,” says Thomas, who was also preparing to open two additional concepts before COVID-19 struck. “I am going to get rid of two-thirds of my inventory, but I do want to preserve some of those things.”

At Curtis Stone’s Gwen and Maude in Los Angeles, sommelier Andrey Tolmachyov has sold some of their collectors wines to regulars, but has been focusing on selling more affordable bottles from the by-the-glass menu in order to preserve the cellar's integrity and to keep his wine distributors working.

Same goes for master sommelier Pascaline Lepeltier of Racines in Tribeca. She’s been selling rare “geeky shit” to regulars on a case-by-case basis from her 8,000-bottle cellar. Her restaurant is a wine-focused concept, and she acknowledges that when it does reopen, she nor her colleagues will have the liquidity to resupply these pricey selections.

This balance between paying bills for now and having a business to return to when life gets back to some semblance of normalcy is not an issue her colleagues in France have had to weigh due to government assistance for businesses impacted by COVID-19. “We are trying to do what we can right now, but this crisis needs to be taken seriously at the federal level,” she says. “If I sell 50 or 60 bottles of wine, it’s bridging through something we can't solve by ourselves.”

For more information on initiatives being taken to assist the hospitality industry through COVID-19, visit Relief Opportunity for All Restaurants (ROAR) and Save Local Restaurants by the Independent Restaurant Coalition (IRC). 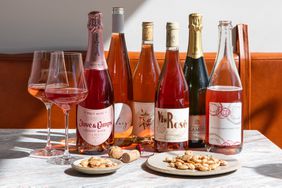