If you're about to ask a rude question, let me tell you why you shouldn't.

Last week was my final shift at the restaurant I had worked in for 10 years, two months, and nine days. Why I left and where I'm going next isn't important, but 10 years at one place of employment is no easy feat, especially in the world of food service. Restaurant staff changes faster than a hungry waiter can gobble down a few french fries on the way to a table. When I made the announcement on my blog that I was leaving my restaurant for a new opportunity, one person named Jesse felt the need to comment negatively about it: "Please tell me you're not a waiter for ten years." That single comment elicited over 2,000 replies and 1,400 angry face emojis. Clearly Jesse struck a nerve with waiters and waitresses. It's like he asked for 10 hot teas on 10 separate checks.

At the risk of disappointing Jesse, he needs to know I have not been a waiter for 10 years. My apron first went around my waist toward the end of the 1900s and it's been there pretty much ever since. It's certainly not the only job I've held over the last 30-plus years, but it is the most consistent one. Restaurant work has always been my security blanket, albeit a stiff, polyester one that smells of stale beer and barbecue sauce. For some people, waiting tables is something they did for one summer after high school and for others it's a lifelong habit. People who have never had the experience of serving food for a living might see it as a job that one takes only when there are no other options. That's not necessarily the case and plenty of people wanted Jesse to know that.

READ: Your Kitchen Doesn't Have to Be Hell

Those who wait tables have all sorts of reasons for doing it. Some do it for the flexible hours that allow them to be home when their kids get out of school. Others do it because their "real job" as a teacher or an office drone doesn't pay enough money. Some of us do it because we actually like providing a service to people who want to enjoy a wonderful dining experience. There are some who do it because of the close proximity to free food, but no matter the reason someone waits tables, there is no shame in doing it.

READ: Don't Be a Jerk to My Staff When They Ask You to Wear a Mask

After thousands of comments, Jesse must have found himself wanting a little more attention and social media bashing from servers around the world because he had a question for me: "Did you ever try college?"

No matter the level of education or the socioeconomic background, wearing an apron is the great equalizer.

Yes, Jesse, I did "try" college. I tried it until I graduated with a BA in Theater, but guess what? I made more money carrying hamburgers to Times Square tourists than I did doing musicals in Brooklyn basements. There are plenty of school loans that are being paid back by the money earned from waiting tables. And even if I hadn't tried college, it doesn't matter. A person who dropped out of high school can wait tables just as well as someone with a PhD in psychology. That's one of the wonderful things about working as a server. No matter the level of education or the socioeconomic background, wearing an apron is the great equalizer. It's sorta like the subway; the 7-train doesn't care how rich and/or powerful you are because everyone gets to listen to the same muffled announcements and smell the same musky odors.

Anyone who wears an apron and takes food orders should be proud of the job they do.

Anyone who wears an apron and takes food orders should be proud of the job they do. One thing that has become abundantly clear during these pandemic days is that restaurants are important. They were some of the first businesses to get shut down and customers missed going to them. People wanted to go to restaurants so badly that they ate outside in rainstorms and freezing temperatures, but how many of those customers appreciated the person who served their food? In their own way, servers are pandemic heroes. We went to work even though we were never deemed "essential." Some states put servers at the bottom of the list for vaccine eligibility, but expected them to go to work with a smile underneath their mask. And we did it because it's what we do.

I'm a waiter and always will be. When you've done it for as long as I have, it becomes a part of your identity and even if I ever find myself between restaurant jobs, it will forever remain a piece of me. Did you ever get stabbed by a pencil in elementary school and you were left with a teeny, tiny pencil tattoo on your skin that you can still see today? That's what waiting tables is like. When the pencil punctured your skin, it hurt. You knew you weren't going to die from it, but it wasn't exactly pleasant. The first time I found myself up to my eyeballs in weeds at a restaurant, it wasn't pleasant, but it wasn't going to kill me. Years pass and you look at that little graphite dot on your palm as something that's permanently a part of you. Waiting tables is my pencil tattoo. I've done it for over 30 years and it's embedded in me.

Yes, Jesse, I have waited tables for 10 years. In fact, I've done it for almost 35 years which is three and a half times longer than 10. I know that, because I tried college. 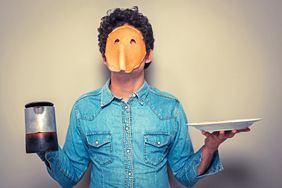