Perhaps no symbol is as emblematic of dining out in the modern era as the QR code. It graces our tables at restaurants, beckoning us to pull out our phones and scan. QR is short for "quick response," and the designs have been around since the mid-'90s. When scanned, the code acts as a shortcut, directing the diner somewhere: to a website to view a menu, place an order, or even pay the bill.

Ravi Kapur, chef and owner of San Francisco restaurant Good Good Culture Club, implemented QR code ordering at the restaurant when it opened in January. It was just one part of a sweeping reimagination of the way a restaurant could work for both diners and restaurant employees. So far, it's a success.

"QR initially came on our radar as part of a solve for lack of labor, but that was only the starting point," Kapur says. The technology ended up helping the restaurant adjust its service model to prioritize employee well-being while still providing an extraordinary guest experience.

"What happens quite often is that we try to solve these problems in isolation and not realize that it could be a structural, foundational issue," he says.

He and the leadership team spent nearly a year identifying what they wanted the business to look like, what was most important, and what was worth getting rid of. The QR codes shifted the server's job of order-taking to digital technology, streamlining the whole process with the added benefit of eliminating those server nightmares—a forgotten drink, a mistaken menu modification—that can literally keep restaurant staff up at night. That's because orders go directly to the restaurant's point-of-sale system, bypassing a server's need to punch in orders after taking them.

This level of efficiency is important. Good Good Culture Club is open for just four hours each night, five days per week. "If we're committing to this idea of mental health and well-being, but we're open from 5 p.m. to midnight, those two things aren't in alignment." Instead, by outsourcing some of the traditional server pain points to technology (think: huge ticket backlogs at the bar), staff on the floor can focus on enhancing the guest experience.

Guests are greeted and seated by a dining room team of people who are happy to explain the technology or provide a paper menu to those who prefer not to use it. They're prompted to scan the QR code to add food and drinks to their order at any time.

"There's been a really positive impact on the flow, the way tickets come in," Kapur says. "There's almost this natural regulation that happens when we seat the restaurant. Certain tables get their order in quick; certain tables take a little longer. That's another unforeseen positive that we didn't quite calculate."

GGCC's service style also changed the way employees are compensated. Leadership prioritized closing extreme wage discrepancies between kitchen workers and dining room staff. They succeeded; dining room and kitchen staff make the same money, while Kapur and his business partner took a pay cut to help compensate for the shift. It gives the impression that everyone working in the restaurant is equally responsible for a positive guest experience.

Kapur thinks the biggest hurdle to mass embrace of QR ordering is diner adoption. Plenty of people just want things to go back to the way they once were. But the way things were doesn't cut it for many restaurants.

By using QR codes at his restaurant, Kapur knows he's asking guests to give up something they're used to in favor of something new, but he wants them to understand it's moving the business forward, toward a more sustainable future.

"We're not giving something up to not have it replaced with something better," he says. "It just feels and looks different."

1. You Don't Need a Special App

If you have a smartphone with a camera, you can use a QR code. Open the camera, point at the code, and wait for a link or icon to appear. Tap to access. Done!

Some QR code ordering software lets the guest choose to keep their tab open or close it after ordering. Either works! But think before you close. Liz Fiedler, owner of The Junction Beer Garden in Mill Valley, California, sometimes gets calls from guests who think they've been double-charged for their beer. They look at their credit card statements and see two charges from the same place. It's not a tech glitch. "It's that they ordered two rounds and they just forgot," Fiedler says.

3. Watch Out For Spills, Tears, and Smears

A soggy or smudged QR code won't work, something that Jay Sanders, owner of Drastic Measures, a bar in Shawnee, Kansas, learned the hard way. When the bar opened in June 2020, he printed the QR code menu on wooden and cork coasters. As soon as they got wet, they were rendered useless. He's since switched to recyclable PVC plastic.

Sure, it feels different to use your phone to order food at a restaurant, but that's the point—all the convenience of mobile ordering, in person! Yangban Society in Los Angeles asks guests to order from the restaurant's deli counter in full view of dishes and specials. Once seated, they use QR codes to add to the order, avoiding repeat visits to the counter. "When guests do order through these QR codes, our team members know exactly where to deliver their order, so the process is streamlined for all," says Katianna Hong, co-chef and partner of Yangban Society.

Some restaurants allow you to place your order on your phone; others simply use the QR code to pull up a menu. Chicago restaurant Esmé briefly explored using QR codes but found them to be an impediment to their brand of personalized service. "While we no longer use QR codes at Esmé, I would encourage guests who are ordering from digital menus to look up from their phone when they are ready to order and make eye contact with their server or the bartender. These physical cues will ensure that the staff knows it's okay to approach you," says Tia Barrett, Esmé's operations manager and beverage director.

Plenty of restaurants are happy to offer traditional paper menus and face-to-face ordering if you can't or don't want to use the QR menu. Just ask!

That's One Way To Get a Following

QR codes aren't just for ordering. At Drastic Measures, a cocktail bar outside of Kansas City, it's a garnish, too.

"I wanted to have fun with it," says bar owner Jay Sanders. So he used edible ink and wafers to create a working QR code garnish for a seasonal mezcal sour. It's called Follow Me and was created with marketing in mind.

Sanders is an industry veteran with years of experience creating the types of cocktails guests want to photograph, and he figured this one would be no different. When guests point their phone's camera at this cocktail, though, they get more than a pretty picture. They have a 50/50 chance of being redirected to the bar's Instagram page for a follow or getting Rickrolled with a redirect to YouTube and Rick Astley's '80s hit "Never Gonna Give You Up."

Did it work? Not at first. "We actually didn't get very many followers at all from it, but it was fun and looked cool," Sanders says. But the image of the drink has since gone viral, and every time it's shared is a new opportunity for a camera scan.

The edible codes are costly to produce, so the Follow Me isn't a menu mainstay. But it'll be back on the menu at Drastic Measures this summer. 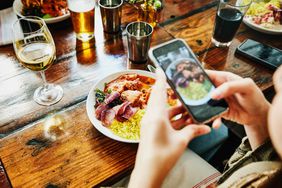 The Post-Pandemic Role of Cell Phones at Restaurants 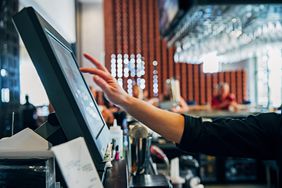 Restaurant Tech Can’t Wait for Us to Dine Out Again