The social distancing measures in place to prevent the spread of coronavirus have hit bars hard. Here's how to help.

All restaurant and hospitality industries are suffering an abrupt and unexpected loss of business due to the current COVID-19 crisis, but bars and their employees have specific limitations that prevent them from pursuing many of the short-term solutions that have been created. That’s especially true for local independent bars that rely on daily business to pay bills and staff. Aside from lobbying local, state, and federal representatives for a bold bailout that many agree is the only real solution, here are some things you can do to help your local bar.

While many laid off workers are filing for unemployment when possible, direct donations are currently the most efficient way to help service workers maintain income at present. Virtual tip jar funds have been started all over the country, including one hosted on Carnegie Mellon University's Center for Ethics and Policy website which links to offshoots in other cities like Annapolis, Madison, and Rehoboth Beach, but it can be as simple as sending some money to your favorite bartender’s Venmo. You can reach out to your bar directly and ask if they are accepting donations to support their staff.

Zack Mack, owner of ABC Beer Co. in New York City has been able to avoid laying off any employees so far, thanks to the retail business attached to his bar selling beer, sandwiches, and gourmet foods to go, but sales have taken a drastic hit and they’re operating on a limited schedule. He says he’s already gotten messages from “a group of solid regulars who want to set up charities for the employees, whether by buying a bunch of beer now that they can collect on later, like a gift card situation, and also doing a general fundraiser.”

Before mandatory shutdowns were enacted, Austin, Texas, experienced a major loss from the cancellation of South by Southwest. “I've heard from friends in the hospitality industry that the conference brings in 15 percent to 25 percent of their income for the year,” said Paula Forbes, author of The Austin Cookbook, “On the one hand, cancelling SXSW as early as they did made everyone in Austin take the crisis much more seriously than I'm seeing friends in other cities take it. Restaurants here are doing carryout service like everywhere else,” including selling bottles of wine and beer, but she worries it will not be enough.

Read more: As Coronavirus Shutters Restaurants Across the Country, a Swell of Support for Workers Rises Up

Beyond directly donating to your favorite bartenders, larger organizations like the Restaurant Worker’s Community Foundation are able to accept tax-deductible donations and direct funds to long-term projects, thanks to their status as a 501(c)(3) nonprofit. They’ve already started a COVID-19 Emergency Relief Fund and are able to direct a percentage of their funds toward lobbying efforts as well.

“We can also act as the fiscal sponsor for other organizations,” says RWCF co-founder and former bartender, John deBary, “if there's an on-the-ground group somewhere gathering relief funds for people in that city and they have someone that wants to give them a pretty large grant, [RWCF] can get these donations to them within a legal framework that allows for a tax deduction, which usually helps people be generous with their money because they know that they can write it off the year.”

New York City announced that bars would be able to begin offering alcoholic drinks delivery, with the caveat that the sales must be accompanied by food, thus limiting the actual number of places that can participate. Bars are quickly figuring out how to adjust, like PDT, a celebrated New York City speakeasy, started selling bottled craft cocktails, but smaller operations are also getting in on the action.

Channing Centeno, bar manager at Brooklyn’s Otis says they’re focusing on local deliveries of a limited cocktail menu of their most popular drinks in two-serving portions for $20, in addition to delivering food with adjusted prices to better compete with other delivery options.

Centeno, who also works as a brand ambassador for St-Germain, says the company is looking for ways to support bartenders and maintain morale. They’re currently starting to partner with bars delivering cocktails to send drinks to out of work industry members.

“Bars are places for people to come together during hard, weird, confusing times,” says Katie Richey, co-owner and manager at King Mother, a 20-seat natural wine bar in Brooklyn that opened at the beginning of this year. “It sucks we can’t be that right now. We look forward to making it to the other side and hope our community shows up big when that happens.” From the beginning, business was brisk and promising, and the bar was starting to develop a reputation for itself, but they decided to close for the safety of staff and customers on March 15. Although they are currently contemplating reopening the kitchen to begin take-out and delivery service, they’ve been helped with gift card sales during the closure, keeping them afloat until they can resume.

Winery tasting rooms, which serve as popular destinations for tourists and locals alike, are also shutting down. “In California, all winery tasting rooms are now closed,” says Sonoma-based wine writer Elaine Chukan Brown, “Many wineries have found small ways to help their employees. Matthiasson asked all employees to work from home and increased the number of paid personal and paid sick days through this situation as well. Mountain Tides has been doing no-contact deliveries of wine orders in the North Coast.”

Even if you can’t visit a tasting room, you can continue to support your favorite domestic wineries through direct orders on their websites, like Two Shepherds and Poe. Brown mentions that wineries are offering discounts to stimulate sales at this moment.

“The point is that buying direct from wineries, especially the family-owned, small business wineries will make it easier for them to support their employees.” 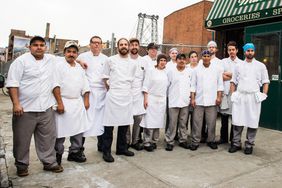