Antara Sinha is a New York-based food writer and editor who has been working in print and digital media since 2017. Her articles and recipes have appeared in Food & Wine, Bon Appétit, MyRecipes, MSN, Yahoo News, Real Simple, Allrecipes, and Southern Living. She is an associate cooking editor at Bon Appétit.

Experience: Antara got her start in journalism as a reporter and editor for WUFT in Florida. She moved on to an editorial fellowship at Cooking Light, where she wrote features and recipes for the publication's online site. During her time at Food & Wine, Antara covered an array of food and food-related topics, from recipes and cooking techniques to best kitchen equipment round-ups, chef profiles, and news. She has been an associate cooking editor at Bon Appétit since 2021.

Education: Antara graduated from the University of Florida College of Journalism and Communications.

Omakase strawberries are uncannily perfect: radiant in color and deeply fragrant-and an eye-popping $50 for a package of eight. But after a taste, a growing group of chef superfans says they're worth it.

Omakase berries aren't just a luxury strawberry: They represent a seismic shift in vertical farming. Hiroki Koga, CEO and founder of Oishii (meaning delicious, in Japanese), grows the Omakase berry at Oishi's vertical farm in a warehouse in New Jersey.

Koga founded Oishii after moving to California to Japan six years ago, and noticed the stark disparity in quality of produce.

"Japan is known for having the world's highest quality vegetables and fruits, but you never realize that when you're living in Japan because you take it for granted," said Koga. After moving to California, "That's when it first came to me that it would be quite rewarding if I could find a way to bring what I'm used to eating in Japan to the rest of the world."

As Californian droughts were creating a need and industry for vertical farming-a closed, environmentally controlled agriculture system that grows produce more sustainably, with less water, in vertically stacked layers-Koga jumped onto the opportunity, bringing his consulting experience with vertical farming in Japan. He selected the Omakase berry, a seasonal variety of strawberry found in the foothills of the Japanese Alps, to begin his stateside vertical farming venture.

For years, vertical farming has been mostly limited to leafy greens. Cultivating fruit requires an additional, tricky step: pollination. "The physiology of strawberry plants and the growing cycles of strawberry plants are significantly more sophisticated and complicated compared to growing a head of lettuce." said Koga.

"I think one of the things that we really are proud of and succeeded in doing that no one else has in the vertical farm field is that we figured out how to really create the perfect ecosystem not just for plants, but also for bees and insects. You will see actual bee colonies living inside the farm with their queen bee and other bees working happily in the farm."

The bees-along with a fleet of AI-robots that monitor the fruit as it grows and predicts future yields-produce a year-round perfect strawberry that, unlike its conventionally farmed cousins, don't use a ton of pesticides. (Strawberries consistently top the annual list of the Environmental Working Group's "Dirty Dozen" most pesticide-intensive crops.)

Immediate goals for Koga include expanding distribution of their Omakase berries beyond the New York area, first working toward nationwide, and eventually international distribution.

"The strawberry is always going to be the center of our brand-like our North star," said Koga.

But Koga and his team have big ambitions for the future. After successfully securing funding, Oishii will work on launching a more accessible "everyday" berry, as well as delve into other produce such as tomatoes and peppers.

"Our end game is really to become the world's largest grower that provides the world's highest quality-not just strawberries-but produce in general, and really democratize tasty produce for everyone." 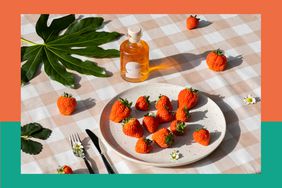