What Is A Gose?

Just how much the American beer palate has changed can easily be encapsulated with the emergence of Goses. In only about a generation, we've gone from "taste great, less filing" to admiration for a once practically extinct, salty German beer style with a name no one knows how to pronounce. (For the record, it's "go-suh.") But that analogy is apt in other ways: Just as Miller Lite was a reaction to America's then-obsession with heavy-drinking lager, the recent love affair with Gose – with its lower ABV and lack of hop character – could be seen as a reaction to the prevalence of potent IPAs.

But let's slow down a second. What exactly is a Gose? According to the German Beer Institute, the style is 1000 years old. Its name comes from the river Gose and the town of Goslar where it was originally brewed. Though salt is now added to the beer to give the style its distinct salinity, that salty character probably originally stems from the natural saltiness in Goslar's mineral-rich aquifers. Around 1738, however, Gose-making began migrating to the city of Leipzig where by the turn of the 20th century, the salty style had become extremely popular. Unfortunately, World Wars and the division of Germany caused Gose to reach a near extinct status until the fall of the Berlin Wall met the modern craft beer movement and brought Gose back from the dead.

As far as general characteristics are concerned, though salt is probably Gose's quirkiest ingredient, a lot of other elements go into making a Gose taste like a Gose. Unlike most beers, which are primarily made from malted barley, Gose uses at least half malted wheat – lending it some of the same characteristics of many of Germany's other traditional wheat beer styles. Beyond yeast, Gose also is fermented with lactobacillus bacteria, which gives the style its typical shot of sourness or tartness. Finally, though like almost all beers, hops are added for flavoring, the hop character in a Gose is minimal to undetectable; instead, coriander is added, which generally has enough spicy or lemony character to override whatever hops might be present. However, as with many modern takes on every style, brewers have taken liberties with all these ingredients meaning saltiness, sourness, spiciness and even hoppiness can now vary extensively. The good news, though, is that Goses are reliably lower in ABV, making them great session beers.

So where should you turn to try the vaunted Gose? Well, the Brewers Association now breaks Gose down into two categories. "Leipzig-Style Gose" is the traditional Gose that stems from the beer's original German roots. If you're going to try a Leipzig-Style Gose, you might as well try something from the source: Leipziger Gose made by Gasthaus & Gosebrauerei Bayerischer Bahnhof in – you guessed it – Leipzig. As intimidating as the name reads, you shouldn't have to travel to Germany to find this beer. Many specialty bars and bottle shops carry this well-rounded and relatively subdued classic take on a Gose. For a more modern version, "Contemporary Gose" tends to ramp up some or all of Gose's more unique flavors like salt or tartness. South Carolina's Westbrook Gose has really been a standard bearer for the modern American take on a Gose since its release in 2012. Of course, Gose isn't just hard to pronounce, some claim it can also be a tough style to love – in which case might I suggest a Gose with training wheels: Anderson Valley's Blood Orange Gose from California – a tart, not particularly salty Gose that brings enough blood orange flavor to warrant being one of your new favorite fruit beers whether you know what a Gose is or not. 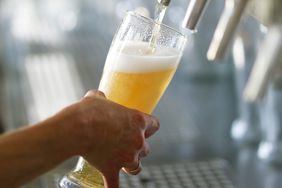 What Is A Hefeweizen?