Queen’s Reward offers a taste of Mississippi to wine drinkers across the country with mead, one of the fastest-growing alcohol categories.

Alabama-based Kelsey Ogletree is a freelance journalist with over a decade of experience as a writer and editor in print and digital publishing. Her work appears in Allrecipes, Bon Appetit, Conde Nast Traveler, Real Simple, Southern Living, Travel + Leisure, The Wall Street Journal, Wine Enthusiast, and others.

If you're not from the Deep South, you may hear the word "Tupelo" and immediately associate it with honey (or Van Morrison). Yet the city of Tupelo—in the northeast corner of Mississippi, famous for being the birthplace of Elvis Presley—is not where Tupelo honey comes from. It is, however, home to one of the region's few meaderies, Queen's Reward, owned by Jeri and Geoffrey Carter, who fell into honey winemaking accidentally.

A decade ago, when Jeri was teaching kindergarten and first grade, they started experimenting with DIY wine kits. Once they'd mastered these, a few years later, they wanted to try a batch on their own. Mississippi's hot, humid climate doesn't lend itself to growing great grapes, so Jeri knew she'd have to get creative. "I started searching the internet for ways to make wine with something other than grapes," she says. "I found a recipe to make wine with honey, so I ran out and got some."

The first batch tasted "pretty good" to the Carters, but because they hadn't tried mead previously, they didn't have anything to compare it to. A trip to the liquor store to pick up professionally made mead proved futile, as it was not available in Mississippi at the time. "That was the first time [we thought] there was an opportunity here," Jeri says.

Months of experimentation later, they realized their first batch had actually tasted "more like moonshine than mead," says Jeri, but they've come a long way since then. Queen's Reward has already won numerous accolades, including silver in National Honey Board's Mead Crafters Competition and multiple bronze and silver awards from Wines of the South regional wine competition, among others.

Officially debuting its tasting room to the public in 2018, Queen's Reward mirrors a larger trend: Meaderies are finally hitting their stride in the United States. In 2003, the country had about 60 commercial meaderies; by 2020, that number had grown to about 450, according to the American Mead Makers Association. Additionally, AMMA claims more than 200 meaderies are planning to open over the next two years—so while Queen's Reward was Mississippi's first, it is surely not the last.

Also known as honey wine, mead is an ancient fermented beverage made with water, honey and yeast. Contrary to what you might expect, however, not all mead is sweet. Just like any winemaker, Jeri says she chooses whether a batch will finish sweet or dry, or somewhere in between. "We deliberately make meads across the spectrum, as we want to have something that everyone can fall in love with," she says. The process for making mead is nearly the same as wine, with the end result having between 11 to 14% alcohol.

For instance, Queen's Reward's Scarlet Noir mead incorporates California pinot noir grapes to give it a red wine flavor, perfect for someone who enjoys a dry cabernet. Unlike red wine, however, there's no tannins in honey, so even though the wine finishes dry, it doesn't leave your mouth feeling that way, Jeri says.

In the South, many wine drinkers do prefer their wines on the sweeter side, and for those drinkers, there's the top-selling Delta Gold mead, made with honey and Riesling grape juice. This summer, it won gold at the Finger Lakes International Wine and Spirits Competition. Queen's Reward also produces Delta Dry, a less-sweet version of Delta Gold often preferred by those who enjoy a dry chardonnay.

Jeri says they don't add artificial ingredients to any of their mead varieties. For instance, the Chocolate Covered Cherry mead is made with tart cherries, then aged slightly with cocoa nibs to impart a hint of dark chocolate, while the seasonal Winter Spice Mead (perfect for the holidays) is aged a week or so with sachets of ground cinnamon, cloves and nutmeg to infuse cozy flavor.

As the first and (currently) only meadery operating in Mississippi, it was important to Jeri that Queen's Reward incorporate local ingredients. She recalls being struck by the beauty of her home state after returning from a cross-country road trip and wanting to show that off through her wine. "When you take a sip of our mead, you're taking a sip of our backyard," she says.

Finding a local honey producer turned out to be more challenging that she expected, as most beekeepers either couldn't spare enough inventory (Queen's Reward will go through 50,000 pounds of honey this year alone) or didn't have an official health department permit. Finally, she met Kip Isonhood of Yazoo Honey & Bee Farm, who today provides all honey for their mead, producing it year-round and delivering it in giant IBC totes with valves for easy pouring. Jeri says she likes how Isonhood's farm is located in the middle of the state, near Jackson, meaning the bees and honey are truly made in Mississippi.

How to Visit Queen's Reward Meadery:

The meadery currently ships to 40 states but doesn't distribute to out-of-state liquor stores until they can further ramp up production to meet demand in Mississippi. (They're on track to produce more than 18,000 bottles of mead this year, up from about 6,200 in 2018). That's what makes a trip to Tupelo to visit Queen's Reward tasting room more special.

With subtle, clever nods to bees throughout (think honeycomb-like tile on the bar and hexagon-shaped side tables), the meadery is located in a warehouse space off the main McCullough Boulevard, with expansive green space in between that's perfect for picnics and lawn games. For only $12, you can enjoy a tasting of five different meads; end with a dangerously good mead slushie, in flavors like blueberry margarita, peach or snow cream; and take home a bee-emblazoned wine glass. Jeri also offers complimentary tours anytime, where visitors can see the 1979 vintage bottling line refurbished by Geoffrey, who's an engineer. It's a rarity among wine production facilities of this size, but Jeri says it makes sense for them: They can make mead year-round, since honey is always available.

During the pandemic, Queen's Reward used their still to produce hand sanitizer for the community. Up next, the Carters are working on expanding into spirits—perhaps honey-based vodka or a honey cream liqueur.

As American interest in mead grows, Jeri says she hopes more local meaderies will come along. "The more people know about mead, the better we all do," she says. "Mead has been around forever, but most people still don't know what it is." 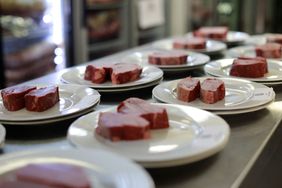