In an age of mindful drinking, the low-ABV spirit is an easy hero.

The Martini can be whatever you'd like it to be: vodka or gin. Stirred or shaken. Ice-cold and served up, or frosty and sitting on a large rock. Olives? Absolutely. Lemon twist? Yes! Splashed with sherry, yellow chartreuse, or pasta water? Martinis contain multitudes.

As of lately, they're even low-ABV, thanks to a new school of low-proof vodkas and gins that are making martinis surprisingly sessionable.

There's no agreement on what constitutes a lower-alcohol spirit, but a good rule of thumb is that one can sit anywhere between 10% and 30% ABV — think your favorite spirits, just at a lower altitude. Rhode Island's Keel Vodka clocks in at just 23.7% ABV, while Canada's 18.8% sells gins and vodkas at (surprise) 18.8% ABV. In England, Perthyn Low Alcohol Spirit crafts a 10% ABV gin(ish).

Early in 2022, comedian-slash-DJ Jilly Hendrix launched Body, a 'light' vodka weighing in at 30% ABV — 25% less than Ketel One or Grey Goose. "I've found it's the perfect low-proof spirit to enjoy in pretty much any vodka-based cocktail you want, from a Martini to something on the rocks," says Simon Sebbah, beverage director at buzzy New York City bar and restaurant Saint Theo's.

"I've been going out a lot my entire life and I've gotten to the point that I want a cocktail, but I don't want to feel the effects of such strong liquor," Hendrix explains. She likens Body's effect to that of wine — it's a slower, creeping buzz instead of stand-up-and-sway effects of a full-proof Martini.

Since launching, she's found her demographics to be quite broad: 25-year-olds who just entered the workforce and want to perform well, health-conscious consumers that are social but drink less, and Hendrix's personal friends, many of whom simply balk at the thought of waking up hungover to a toddler.

Most recently, Hendrix says she celebrated her birthday with three Body martinis over the course of the revelry. "It would've been a very different night if I had three normal martinis," she laughs. "With these spirits, you're not changing your behavior, you're just substituting it with less alcohol. I think people are just trying to operate at a place they feel good."

Similar to the rise of espresso martinis and hard seltzers, major brands are clamoring to cash in on the trend. Grey Goose recently released a 30% ABV Essences line of vodka infused with various fruit and botanicals. Ketel One now offers lower-octane vodka-and-botanical infusions.

"I'm really seeing a developing market for low-proof spirits," muses Ruben Rolon, the head bartender at the Michelin-starred Le Jardinier and Atelier Joël Robuchon Miami. "While some lack the body of their full-proof counterparts, the flavors are just as vibrant. They're almost nostalgic – they maintain a spark that reminds us of the full-proof drink."

Even categories that champion high-octane ABVs are lured by the appeal of lower proof. Generally, whiskey makers tend to take a more-is-more approach to proof, with ABVs inching up to a chest burning 60%. "I think the days of 'high-proof equals high value' marketing are waning,"says Laura Unterberg at The Fox Bar & Cocktail Club in Nashville. "Maybe lower proof spirits are a natural next step for distillers looking to experiment."

Nicole Austin, master distiller at Tennessee-based distillery George Dickel, recently rolled out a low-proof brown spirit, aged for 15 years. "At 39.9% ABV, it is legally not even whiskey," Unterberg says, touching on one of the key pain points of low-proof spirits. "However, Austin has achieved something elegant and subtle — a low-proof spirit with depth and nuance that's fruit-driven with that classic vanilla pie crust finish."

Despite their growing popularity, lower-ABV products face a government-bestowed identity crisis: legally, bottles labeled vodka or whiskey have to be distilled to a minimum of 80 proof (or 40% ABV), which means producers have to sidestep traditional naming conventions — and forgo the consumer recognition that comes with them. Since these spirits can't classify as their regular-proof counterpart, they have to find a way to align themselves with the category in other ways. Austin's Cascade Moon isn't whiskey, so they market it as a 'barrel aged spirit distilled from grain.' Meanwhile, Ketel One describes their low-ABV spirit as 'made with vodka while Body is a self-titled 'light vodka.'

Low-proof spirits are still in their infancy, so growing pains like these aren't unusual. Neither are naysayers, who scoff that mellower spirits lack texture, and claim that without the same amount of alcohol, the liquid is unpleasantly thin or less viscous. Some low-alcohol brands avoid this criticism by adding new ingredients — California's Chareau liqueur, a clear brandy, uses fresh-pressed aloe juice to proof down the spirit while simultaneously adding body. Sloe gin, a growing spirit category with producers like Ford's Gin and Mother's Ruin, takes regular-proof gin and soothes it by steeping it with sugar and sloe berry.

Ultimately, Sebbah notes that most drinkers will only find texture differences if they compare these bottles directly to regular-octane spirits. "The taste simply won't be as strong, but on the other hand that offers a lot more room to play with when it comes to flavor pairings in cocktails," he says. "Flavors aren't overshadowed by high proofs."

Plus? Low-ABV spirits are "easier to shoot," laughs Alejandro Ibanez of Dilworth Tasting Room, though he'll sip any of these spirits on the rocks, chilled, frozen in a shot, or with a splash of mixer. "The options for these are endless!")

The low-ABV category's growth aligns with broader trends in the drinking world. "I think people are opting for low-proof spirits for a very simple reason: they want to reduce the amount of alcohol they consume, but still want to be part of the social interaction and nostalgia that comes with enjoying spirits," says Rolon.

Over the pandemic, an increasing number of drinkers reckoned with, well, drinking. That reflection resulted in a range of results, from a staunch switch to abstaining to more conscious consumption, whether through more nights off or opting for lower-alc cocktails on evenings out. The spirit-free category expanded at an impressive clip as non-alcoholic bars and bottle shops opened with more than enough products to fill their shelves and menus. That said, while there are many benefits that come with moderation and more sessionable spirits, none of these products, despite marketing mavericks' best efforts, are healthy or better-for-you. Alcohol is alcohol and any measure is still an intoxicant.

"People are learning what their full range of options are," Sebbah says. "When you enter a bar or a restaurant looking for low-ABV, you used to think of Aperol Spritzes, Americanos, and other aperitivo-based drinks." And as those low-proof, aperitif-esque drinks — Spritzes and Negroni Sbagliatos — become wildly popular stateside, and Sebbah predicts more drinks in that low-ABV category will join the conversation. "I think in the near future we are going to see more and more low-proof spirits." Not everyone is willing to see the low-ABV boom as a trend, though. Jeff Savage, head bartender at Vancouver's Botanist feels that this influx of new brands is largely spurred by smart companies who are starting to accommodate consumers interested in flavors without the corresponding alcoholic component."This, combined with the current golden age of cocktail creation and the demand for new, unique ingredients has made it a great market for companies to explore different options in the low-ABV space," he says. 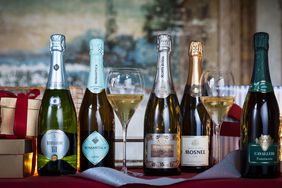