What Is Land Beer?

One Virginia farm is brewing beer with ingredients they’re harvesting, including the wild yeast.

At Wheatland Spring Farm + Brewery's first annual Land Beer Fest in June, the festivities looked a little different than your traditional beer event. Instead of a convivial crowd jostling over tables of small tastings, owners Bonnie and John Branding designed their event to give visitors a peek behind the wheat sheaves.

"We wanted to bring people into our field to make a connection between the beer that they're tasting and the things that are growing around them," says Bonnie. The festival of "farming for fermentation," as they call it, featured experts stationed around their 30-acre farm in Loudoun County, Virginia, about 50 miles northwest of Washington, DC. Festival-goers stopped at each to learn about the farmer, maltsters, and brewer behind each beer.

They're making land beer, which means they're brewing beer using ingredients they grow, harvest, and cultivate on the farm. The Branding's don't know of any operation like theirs in the country. Grains like wheat and barley, herbs, fruit, vegetables like yarrow and cucumber, and honey from the two bee colonies in the grain fields all go into beers like Hold on to Summer, a cucumber gose, and Corn Crib farmhouse lager.

People often think of land beer as a style of beer, but according to the Brandings, it encompasses more of an approach, "tapping into that ethos of marrying farming and brewing," says John. Wheatland Spring is an estate brewery, akin to an estate winery, where they grow the grapes, ferment, condition, bottle, and serve on site.

"Some of the beers we make are 100-percent made of ingredients within one thousand feet of the brew house," says John. The rest are made using craft malt grown on other small farms, either in Virginia or their agricultural growing region.

Bonnie and John opened Wheatland Spring in June of 2019, after starting to farm on the land three years earlier. Before moving to Northern Virginia, the couple lived in Germany, where they were inspired by the country's farm breweries that make landbier, or beer of the area.

"Driving up to a brewery in northern Bavaria, being able to park next to the ingredients that are going to be the next beer coming out of the brewery, it was something that I wasn't familiar with in the States," says Bonnie. "I had never seen that level of product coming out of the land and being served there at the taproom—the identity that farm breweries have with their surrounding agriculture."

When they made the decision to move forward with their dream of running an estate brewery, the couple started researching farms, digging into elements like water quality and soil health. They looked at some 70 swaths of farmland for sale, and Wheatland Spring, which started as a working farm around 1832, had the magic mix of top notch topsoil quality, and the pure water from hundreds of feet below the fields that needs no manipulation. The cycling teams that show up on weekends to fill their water bottles from Wheatland's spigot tell them they have exceptional water.

These elements all add up to stellar beers—made in the farm's hundred-year-old corn crib—that show off the character of the land in a moment in time. The Harvest 2020, for example, is a farmhouse ale conditioned in oak wine barrels over a winter and spring. It's made with estate honey, plus wild-captured yeast.

To really capture the taste and character of the farm, they captured their own yeast. The team put a sugar source (in this case, wort) out in the fields, then brought the samples to a nearby lab to isolate the yeasts. Over the next year, they made small batches of beer to test the strains. "Most of them were not very good," says John. But they found three that resonated, and expressed different lanes of character from the farm. "They each reflect a different farmhouse ale strain that we use regularly and in all our beers."

Why go to all the trouble to labor (in the literal sense, this is farming, after all) over every ingredient? It's not just about trying to make local beer, or strictly using ingredients they grow. By having full control over the soil, the crop selection, the processing—everything along every step of the way—they can grow and harvest the best ingredients, and transform them into beer people want to drink.

"It's not novelty of proximity for us," says John. "We want it to be the highest quality beer we can. But by its very nature, it's going to reflect where it's from, because the ingredients are so unique and special."

The inconsistencies are part of what makes the beer great. American beer has long taken its cues from macro-breweries, where consistency is king. With so many variables on the farm—weather, crops, even the honey flavor changes as the crops rotate— it means the beers can be unpredictable.

"Part of what we're trying to convey to folks," notes John, "is that variation in our natural agricultural products is not only okay, but it's a really good thing." 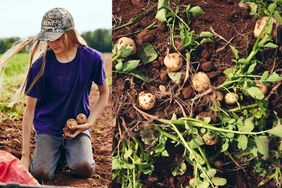 The World's Best Spud Recipes Come from This Potato Paradise