The creators of the limited edition "Gold Fashioned" are branding it as the world's first luxury ready-to-drink cocktail.

Who would pay $150 for a bottled old-fashioned? We guessed "whiskey geeks with deep pockets." Drinks industry vet Robert Haynes calls them "sophisticated sippers," and he's betting they'll clear out this year's stock by December.

The bottle has something of a pedigree: Frontman creator and co-founder Haynes is an ex-Chicago bartender, best known for his tenure at The Violet Hour, a James Beard Award-winning cocktail bar in Logan Square, where he also co-founded the acclaimed (now closed) cocktail bar, Analogue, in 2013. He then co-founded Apologue Liqueurs in 2018. And after a sell-out first batch in 2021, Sunday's Finest Gold Fashioned's 2022 blend elevates last year's concept even further.

What makes this bottled cocktail, dubbed by its creators (which also includes co-founders Jordan Tepper and Damiane Nickles) as the "world's first luxury RTD," worth the price? The production is small, topping out at just 3,000 bottlings, and the packaging design is an experience of its own. The recipe involves a bespoke blend of "vintage" Bardstown-born bourbon and Indiana rye, plus proprietary saffron bitters, crafted sustainably by the handful with ingredients from every inhabitable continent.

A typical old-fashioned cocktail is built with bourbon, simple syrup, and in the words of David Wondrich, "a couple splashes of bitters." For that last part, Haynes and his team had a different idea: "What if we sourced the world's most exquisite spices from the six inhabitable continents?"

For the Grade-A Tahitian vanilla, Sunday's Finest partnered with Chicago-based Rare Tea Cellar, helmed by Rod Markus, "known for sourcing the absolute best of the best," says Haynes — think Michelin-star restaurants and cocktail bars — "and we found great vanilla beans that were almost a foot long and fat as your finger." The bitter Seville orange peel is, of course, from Spain. And the gentian root? "Wild-harvested from the French Alps," says Haynes. Sweetening the deal is the fair-trade demerara sugar from Malawi, which Haynes says makes for a silky syrup that brings out the whiskey's complexity.

Lastly, the package comes with an atomizer of orange zest to spritz your drink with, should you be missing the optional orange peel garnish.

Any bottle that says "small batch" isn't saying much. After all, size is relative. For this, we'll make an exception: Sunday's Finest Gold Fashioned is produced in what can only be described as one big small batch, starting with a single liter. It was a "slow and steady production process," says Haynes. "Also, everything is very expensive, so not a lot of room for air, especially once you get to larger batch sizes."

Serving suggestion is to "slowly" pour about 2 oz. over ice (the bigger the cube, the better, for less watering down). Spritz once with orange zest. By these measurements, each 750 ml. bottle contains about 12 servings, which puts you at $12.50 per drink. For those with a slightly heavier pour, the per-drink price is on par with a bar serve.

The Gold Fashioned is available to purchase online at sundaysfinest.com and ReserveBar, as well as select retailers nationwide. 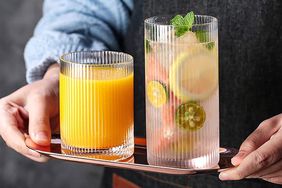