We love creamy dreamy pudding, from a rich and silky chocolate pudding to a spiced and textured saffron rice pudding. Explore more satisfying desserts, including classics like Rich and Creamy Butterscotch Pudding and inventive twists like this sweet and tangy Goat Cheese Pudding. These pudding recipes are spoon-licking good.

"For me, ginger should be everywhere," says chef Jean-Georges Vongerichten. "It's as good in marinades and vinaigrettes as it is in dessert."

Butterscotch pudding is traditionally made with butter and a little Scotch (the alcohol burns off during cooking). Pastry chef Lisa Sewall makes a supercreamy version that is a bit of a cheat — she uses butterscotch chips to simplify the recipe. The result is so flavorful, even purists won't complain.

This recipe from the late, great cookbook author Richard Sax has everything one could ask for in a chocolate pudding — an intense flavor and a silky texture that's still firm enough to stand a spoon in. For the best possible pudding, use top-quality cocoa powder and chocolate.

As chia seeds soak in almond milk, they create a tapioca-like pudding We love topping it with sliced fruit and toasted nuts.

For this pudding, molecular gastronomist and pastry chef Dana Cree blends tangy goat cheese and lemon juice with a rich vanilla bean base to create a dessert that's packed with complex flavors.

This vanilla-flecked rice pudding is exceptionally easy and exceptionally delicious, thanks to the tangy rhubarb. Chef Krista Desjarlais gently poaches the stalks in red wine, sugar, lemon juice, and cinnamon. Perfect on the pudding, the rhubarb would be equally good with Greek yogurt.

This delicious pudding gets its rich flavor from a simple homemade caramel. Top it with a crunchy nut brittle for an extra treat.

Baking in a water bath gives this deep, dark chocolate pudding a smooth and creamy texture. Traditional ramekins are an easy choice, but it's also fun to bake and serve in small glass jars.

With its delightful contrasts of warm spicy pudding and cold vanilla ice cream, this version of an American classic is the ultimate comfort dessert. Homey as it is, though, it looks elegant when served in stemmed bowls. While Indian pudding is frequently stodgy, our version is soft and light and altogether tempting.

Whipped cream and toffee crumbles make the perfect garnish for this rich dessert.

David Guas, a New Orleans native, remembers this comforting dessert from his childhood. It's a spectacularly creamy banana pudding topped with a crumble made from vanilla wafer cookies.

Miso-enriched caramel intensifies the deep, chocolaty flavor of these silky puddings from pastry chef Clarice Lam. Be sure to bring the leftover caramel to the table; its savory, bitter, and sweet flavor will have guests reaching for more.

This sweet Persian rice pudding called sholeh zard is made with three distinct ingredients: saffron, cardamom, and rosewater. It's delicate in flavor but so deeply aromatic that it's hard to stop eating it.

This creamy and fluffy rice pudding is good enough on its own, but it's even better with two great sauces: a fruity and tangy sweet cherry sauce, as well as a creamy caramel sauce.

This simple chocolate pot de crème is spiced with cinnamon and allspice. A touch of ground habanero chiles that were dried over an open fire gives it a slightly smoky flavor.

Jonathon Sawyer and his family love chocolate-covered pretzels. That gave Sawyer the idea to create this luscious dessert that brilliantly combines the flavor of salted popcorn with a sweet, creamy pudding.

This creamy semolina pudding, traditional to Parsi cuisine, gets its velvety texture from gentle, constant stirring and a careful eye on the heat; it should bubble when cooking over high heat but not come to a full boil. Sweetened condensed milk — writer Sabrina Medora's grandmother's riff — and a simple whole milk–and–egg mixture thicken the pudding and add a creamy, sweet flavor.

Pot de crème ("pot of cream") is a traditional French custard typically served in a pot-shaped cup. This milk-chocolate version from pastry chef Frank Urso is supersilky and dense. 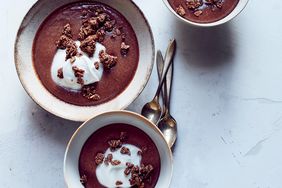 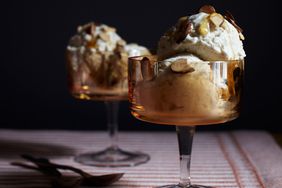 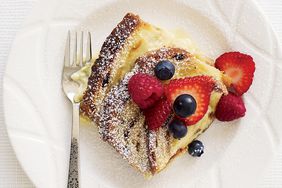 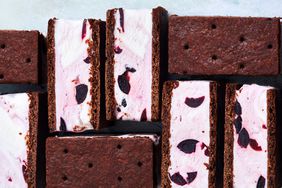 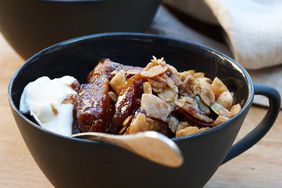 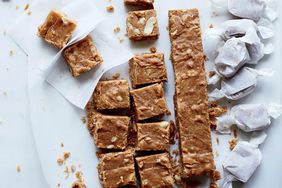