The low-calorie ice cream is outselling Ben & Jerry's and Häagen-Dazs in grocery stores across the country.

Move over, Breyer's, Ben & Jerry's and Häagen-Dazs, Halo Top has come for a spot atop the Mount Rushmore of ice cream (what a delicious world this would be were that a real thing). For the first time ever, Halo Top, the Los Angeles-based, low calorie, high protein and "guilt free" ice cream, has surpassed all of its competition to become the best-selling pint of ice cream in U.S. grocery stores.

"The reason we've taken the number one spot is simple: We have amazing fans. We are eternally grateful to them for even allowing us to exist, let alone thrive," said CEO and Founder, Justin Woolverton. "Our promise to our fans is to maintain the quality they expect from Halo Top and, of course, to bring them some exciting new things in the near future."

Founded in 2012, Halo Top has quickly become exceedingly popular with consumers, appealing to both ice cream fanatics looking to lower their calorie count and health-minded consumers who want to indulge more sensibly. According to Woolverton, sales in 2016 jumped about 2,500% to $66 million from the past year with more than 13.5 million pints sold at an average price of $4.89.

Halo Top's 17 flavors contain between 240-360 calories per pint, or 60-90 calories per serving. Compare that to a pint of Ben & Jerry's vanilla, which contains 250 calories per serving and 1,000 calories if you empty the carton. Who are we kidding, though? No one is eating a "serving" of ice cream, which is exactly why Halo Top's "guilt free" messaging has proved to be so effective. Halo Top also contains more protein (five grams v. Ben & Jerry's four) and both significantly less fat (two v. 16 grams) and carbs (five v. 21 grams). It even has three grams of fiber per serving.

While details are limited, Halo Top is planning on introducing even more flavors in the near future as they continue their quest for frozen dessert domination. 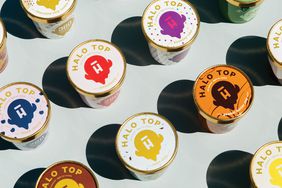