The History of S'mores: Ancient Greeks, Girl Scouts, and One Very Puritanical Minister

The first recipe for the campfire treat is 95-years-old, but the seeds of the s'more go back much further.

Like savoring a slice of watermelon, licking popsicles, and eating dozens of hot dogs, making s'mores is a summertime classic. And while the first official recipe appeared more than 95 years ago, the undocumented tradition of the s'more may have started earlier.

The very first marshmallows came from a plant called Althaea officinalis. Early civilizations, including the ancient Greeks and Romans, used the root and leaves of the plant for medicinal purposes, often to help with inflammation (and as a laxative). In fact, the word "Althaea" comes from the Greek "altheo" meaning "to cure." But it was the French who first marketed marshmallow as a treat rather than a medicine, combining the root juice of the plant with eggs and sugar beaten into a foam. They formed the soft paste into a lozenge and called it pâte de guimauve. Its purpose was two-fold: to soothe the throat and taste good. But this treat was expensive and labor intensive, much like the marshmallow-based medicines of the day. By the end of the 19th century, gelatin replaced the juice from the actual plant because it was a close approximation in taste and form, but a much cheaper alternative.

Graham crackers were originally invented to curb sex drive. Early 19th-century New Jersey Presbyterian minister Sylvester Graham believed that humanity, as Atlas Obscura reports, was on its way to moral collapse due to an obsession with carnal desires. He also believed the food we were eating greatly contributed to our undeterred need to have sex. A simple steak dinner with wine could, according to an 1847 text he wrote, "increase the concupiscent excitability ... of the genital organs." So, he promoted a special process of baking using only "finely ground, unbleached wheat flour, wheat bran, and coarsely ground germ." Out of this came a bland, dry cracker that he named after himself: the graham cracker.

There are a few potential precursors to the iteration of s'mores we know today. Victorian-era funeral cakes, specially prepared upon the death of a loved one, sometimes included chocolate and marshmallow. During the 1890s, a marshmallow roasting fad took hold of summer resort towns in the Northeast. Places like Asbury Park in New Jersey hosted such events, which often drew a young crowd given that newspapers at the time called the roasts an "excellent medium for flirtation" since people could nibble off each other's sticks. Mallomars, which are essentially s'mores in cookie form, first appeared on shelves in 1913. Moonpies, basically a s'more cousin, debuted a few years later.

While all of these tasty innovations got the idea of roasted marshmallow with chocolate and graham crackers into people's heads (and mouths), it wasn't until 1927 that it all came together in gooey symphony.

The first official recipe for a s'more came out in the 1927 Girl Scout guidebook, Tramping and Trailing with the Girl Scouts.

While the book was meant to give advice on how to be a good Girl Scout (always get a parent's permission before hiking!), its lasting legacy was the "Some More." Originally intended to feed eight hungry scouts, the recipe, which was later credited to a troop leader named Loretta Scott Crew, calls for 16 graham crackers, eight bars of plain chocolate, and 16 marshmallows. Next, it says to toast the marshmallows to a "crispy, gooey state." Then, put the marshmallow on top of a chocolate bar and in between two graham crackers, and violà, you got a "Some More." It's unclear when the name was shortened to simply "s'more," but various Girl Scout publications referred to the treat as "Some More" until at least 1971.

If nothing else, it all makes for a good campfire story. 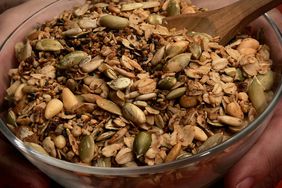