People in Sichuan Are Lining Up for Spicy Chile Oil Soft Serve, and It's Actually Great

Just a few months ago, Chinese teens blessed the internet with the pop-culture meme of the year: 10-second makeover videos set to a Kreayshawn remix with audio of Riverdale's Camila Mendes musing, "oh well, karma's a bitch." (Trust us, just watch. It owns.)

Now the youths are at it again with a viral dessert trend sweeping the cities of Chongqing and Chengdu: cups of vanilla soft serve soused in spicy, chile-flecked, tongue-numbing chile oil. Locals are lining up down the block to eat it. And just like those teens' makeover clips, this unlikely sweet-and-savory novelty is...actually really good.

Food & Wine got wind of the trend via Jenny Gao, a Chengdu-born, Western-raised chef and entrepreneur who spent 6 years in China founding a fast-casual restaurant, running pop-ups, and studying the rich heritage of Sichuan cuisine.

"It first hit the Chinese internet around July 20th," she said over the phone from Los Angeles. "I found it through an article on WeChat about a store in Chongqing that was serving it. The idea then spread to some shops in Chengdu. There was also a TV segment where China Daily interviewed some people from Sichuan about the idea, and they were all, 'yup, this is totally up our alley. We stan this.'"

Earlier this year, Gao crowdfunded the Western-facing launch of her condiment brand, Fly By Jing, whose inaugural American offering is a jar of Sichuan-style chile crisp—an oil-based sauce of dried red chiles, Sichuan peppercorns, ginger, garlic, spices, and dried mushrooms and kombu for a natural dose of umami. The sauce, which is already available for Chinese customers on Gao's WeChat store, may remind Chinese grocery goers of Lao Gan Ma, the chile crisp from Guizhou Province that's become the best-selling hot sauce in China and a cult condiment among American chefs.

On a lark while covering the Kickstarter launch in early July, this reporter spooned some of Gao's chile crisp over a bowl of vanilla ice cream. It worked. Like a squiggle of hot honey on wings or pizza, the heat and umami of the sauce add serious umph to a scoop of Haagen-Dazs, while the ice cream boosts the fruity flavor of the chiles and slight citrus notes of the peppercorns. The occasional crunch from a shard of chile is a nice bonus.

For all its viral reach, chile crisp ice cream doesn't seem too popular outside Sichuan and Chongqing. One small fro-yo shop in the Taiwanese city of Tainan will sprinkle crispy chile bits over your soft serve, but the item appears to be more gimmicky brand integration than genuine innovation. In Long Beach, executive chef Shelly Bojorquez of Saint & Second offered a one-night special of a brownie ice cream sandwich sauced with salsa macha, an oil-based chile and peanut sauce you could arguably call a Mexican chile crisp. "The salsa helped break through the creaminess of the ice cream," she wrote over email, "and the chile paired nicely with the brownie."

Gao explained that while chile crisp soft serve may be a legitimately brilliant idea, it stems from an internet subculture of deliberately terrible ones. "It's called 'hei an liao li,' which you could translate to 'dark cuisine,' and it's where amateur cooks make and post bizarre combinations of unappetizing foods. There's one of with instant noodles in a broth of herbal medicine you take for coughs. Another showed instant noodles frozen into popsicles." Consider it an edible version of chindogu, the ridiculous Japanese contraptions designed to solve non-existent problems, such as high heels crowned with tiny parasols, or a toilet paper dispenser to wear on your head during allergy season.

Sure enough, this isn't the first time chiles and ice cream have met under the guise of hei an liao li. Back in 2014, the hot thing was dipping frozen vanilla pudding pops into bowls of Lao Gan Ma.

But over in Los Angeles, Gao is 100 percent here for chile crisp ice cream, so much so that she's planning to serve it at her December 1st launch party at Urban Outfitters in Hollywood from 2 to 5 pm, which kicks off the sauce becoming available to the general public to order online. Gao is still tinkering with how she'll serve the dessert, which may involve a collaboration with an artisan ice cream brand in Los Angeles. "I think it's the soft serve shape that made it go viral," she said, "but the combination is definitely very good. The heat of the chile and the icy creaminess of the ice cream is such an interesting contrast. Your mouth is confused, but your brain is like, 'more! more!'"

How to hack your own

The chile crisp: American backers of Gao's Kickstarter should receive their order by November 15th; newcomers can pre-order now for general release starting November 30th. Lao Gan Ma chile crisp is also a great choice here, or you can use the chile oil instructions in this spicy Sichuan wonton recipe to make your own. Go for flavor over heat, especially since cold ice cream dulls the subtler tastes of any chile crisp, and make sure whatever you're using has some good crunchy chile flakes, sesame seeds, peanuts, and/or Sichuan peppercorns to sprinkle on top.

The ice cream: Keep it simple; stick to an easygoing vanilla ice cream. For storebought, lighter is better in this case, such as a fluffy Breyer's/Dreyer's or Edy's. Gao also appreciates the virtues of a swirl of friendly neighborhood fro-yo, which adds a welcome twang to the heat. 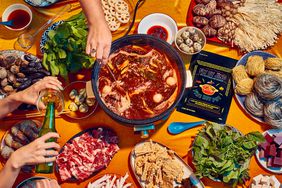