Finally, an ice cream that's built to be eaten while watching TV on the couch!

Welcome to today's edition of "Which Came First, the Partnership or the Pun?" Capitalizing on a product idea that seems to have been waiting for the taking for at least five years, Ben & Jerry's has announced they've officially collaborated with Netflix for a new ice cream flavor called Netflix & Chilll'd.

The Vermont-based ice cream brand describes the new flavor as "an indulgent production starring peanut butter ice cream, sweet & salty pretzel swirls & fudge brownies." They continue, "Whether you're streaming a laugh-out-loud comedy, an edge-of-your-seat drama, or a hey-I-didn't-know-that documentary, it's not complete without a tasty treat and a few of your favorite friends." Netflix & Chilll'd—which is sold both as regular ice cream and in a non-dairy version—is currently available in pints at retailers, online, and in Ben & Jerry's Scoop Shops.

Meanwhile, you may find yourself wondering, Wait, what do peanut butter, pretzels, and brownies have to do with Netflix and chilling? The brand suggests that these flavors are the kind of thing you'd reach for while watching your favorite show: a bit of salt, a bit of sweet. But wouldn't maybe, like, popcorn make more sense? And/or maybe something associated with romance? Candy hearts or chocolate kisses or even red wine? (I could make some R-rated suggestions, too, but I'll stop while I'm ahead.)

Of course, this isn't Ben & Jerry's first TV-related flavor. Previous iterations have involved much more extensive puns, though. For instance, Jimmy Fallon's flavor is The Tonight Dough—featuring multiple types of cookie dough. The Stephen Colbert flavor is Americone Dream±featuring waffle cone pieces. Compared to its predecessors, the new Netflix and Chilll'd moniker doesn't seem to demand a specific roster of ingredients. All ice cream is "chilled," after all. Icy chunks wouldn't be an ideal mix-in—they'd probably just hurt your teeth. At the same time though, doesn't it seem like such a broad pun could have offered up a blank canvas to really get creative?

Regardless, if your night of "Netflix and chill" goes according to plan, that pint of ice cream will likely be Disregarded & Melllting anyway. So we guess the ingredients really aren't all that important—though we could never argue with the combo of sweet and salty. 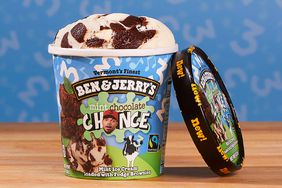 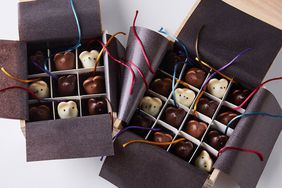