These Passover-Friendly (and Gluten-Free!) Brownies Are Coconut Bliss

Coconut pulls double duty in this Passover dessert that you'll want to bake all year.

Although brownies aren't typically included in the canon of classically Jewish food, for Jake Cohen, they're integral to his Jewish identity. Cohen is a New York–based food writer and a serious entertainer; friendly dessert. pre-pandemic, he hosted communal Shabbat dinners for 100 people at a time. For a crowd-pleasing dinner, he'd serve sheet pan brownies—but found dinner guests were divided on them. "They fell into either Team Cakey or Team Fudgy," Cohen says. "I wanted to create a brownie that was going to please everyone."

And that's exactly what he did in his new cookbook, Jew-ish: Reinvented Recipes from a Modern Mensch. Using coconut flour instead of wheat flour, Cohen created a brownie with a consistency that's simultaneously tender and dense, while also keeping the brownies gluten-free and kosher for Passover.

Then, in an homage to the canned Manischewitz macaroons he grew up eating at his own family's Passover Seder, Cohen tops the coconut-flour brownies with a layer of well-salted coconut macaroon to yield an eye-catching hybrid dessert that's the best of all worlds: chewy, crunchy, and not too sweet.

Get the Recipe: Coconut Macaroon Brownies
Was this page helpful?
Thanks for your feedback!
Tell us why!
Related Articles 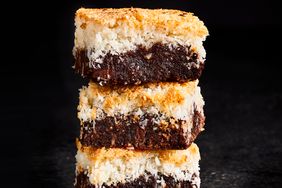