This pre-Prohibition era cocktail is back in style — here's how to make one at home.

Drinks so strong they could revive your hungover corpse, the Corpse Reviver is just one recipe in a group of drinks with the same name that were conceived as a jump-start to a very hungover day. Made with a blend of gin, orange liqueur, Cocchi Americano, a quinine-flavored aperitivo, lemon juice, and absinthe, this cocktail clocks in at a very high-proof, but still tastes balanced on the palate. This corpse reviver, which features a bouquet of aromas from botanical gin to multiple types of citrus, is reminiscent of the second iteration in the Corpse Reviver family, the Corpse Reviver No. 2. This second version is boozier than the first, brandy-based version of the cocktail that dates back to the mid 19th Century.

Like many Prohibition and pre-Prohibition cocktails, the Corpse Reviver is composed of mostly spirits that are artfully paired together in harmony. While just a dash is used, absinthe gives this cocktail an extra hit of herbaceous aroma. Made from herbs steeped in high-proof spirit, absinthe is an overproof spirit seen often in recipes from this era. Because absinthe is so high-proof, it can sometimes be difficult to fully experience its fresh flavors on its own. At Apotheke in New York’s NoMad neighborhood, Beverage Director Nicolas O’Connor plays with absinthe throughout the menu, but believes a dash or two in a cocktail like the Corpse Reviver is a perfect introduction to the spirit. “By presenting absinthe for its flavor and not its strength,” says O’Connor, “you can show people it can be a versatile part of any liquor cabinet.”


The other spirit worthy of your attention in the Corpse Reviver is Cocchi Americano. “Pronounced COKE-ee (not COACH-y), it's a darling of the cocktail community that shines on its own, with a splash of soda, or in any manner of classic cocktails,” writes Kate Dingwall. The aperitif is sweet, a little bitter, and has a lovely floral quality. Cocchi is a white wine-based aperitif, so it has some inherent acidity and sweetness which helps balance the high-proof spirits in the Corpse Reviver. In a pinch, you can substitute Lillet Blanc or white vermouth for Cocchi in this recipe, just taste it for balance and add extra lemon if you’re missing the bitterness. Cheers! 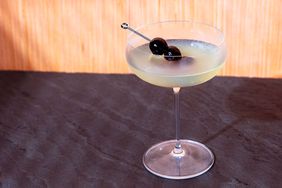