Disruptions in the supply chain will likely lead to a shortage of turkeys this Thanksgiving. Consider these five main dish alternatives.

Since the summer, the possibility of a turkey shortage this Thanksgiving has been looming like a Macy's parade float over Fifth Avenue. Shady Brook Farms—one of the country's largest turkey suppliers—pointed to labor shortages and increased costs for what it says could be a dearth of small birds. The shortage seems to be coming to fruition, and the bad news doesn't end there.

Other experts are encountering the opposite problem. Global meat purveyor Rastelli Foods Group has found the smaller birds, from seven to 12 pounds, are available, but the bigger birds from 16 to 18 pounds are in short supply.

"So many things are broken in the food chain right now, and turkeys are going to be one of them," he says. Mentzer, also a chef by trade, theorizes that suppliers have been processing smaller birds because they can produce more. The company, which runs two retail locations in New Jersey and also ships direct-to-consumer nationally, put in an order for turkeys the first week of October, and was told by suppliers they won't be able to get more.

Spiral hams, too, are scarce, according to Rastelli's vendors. The retail locations have been getting calls since early October, weeks earlier than they usually do. "People are petrified that they can't get a turkey," Mentzer says.

But maybe that's not such a bad thing. Sure, turkey is synonymous with Thanksgiving. But consider this year the chance to try out a different table centerpiece, and maybe just start a new family tradition.

Below, chefs recommend five creative, impressive, and just-as-delicious (with all due respect to the holiday bird, maybe more so) alternatives to turkey to serve for this year's Thanksgiving festivities.

Chef Danny Lee, co-founder of Washington, D.C.'s Anju (and CHIKO, I Egg You, and Mandu) suggests using Cornish hens to make Tong Dak for a dish that "could easily replace Thanksgiving turkey."

"Tong Dak is typically a whole, spatchcocked chicken that is double-fried, with a very thin and glassy skin," says the chef, who notes his twist is to use the hens—which are smaller, so easier to fry—to serve individual portions. He suggests brining the hens overnight before rolling each in a simple seasoned flour dredge and dipping into a thin vodka-based batter and dropping into frying oil.

'The beauty of this is that the first fry can be done well before dinner time, and the hens can rest until you're ready to do the very short second fry, and then serve," he says. He suggests serving Tong Dak with two separate sauces: one more of a soy- and garlic-based sauce, the other a spicy gochujang and vinegar-based sauce. "This will take up much less space, time, and mess than a typical roasted turkey for Thanksgiving."

Rastelli's Chris Mentzer also recommends serving Cornish hens, noting that you can stuff them with your family's favorite dressing (and even use more than one recipe, customized to each diner's preference.)

"We roast them and serve them just like a little mini turkey on your plate," he says. "Plus, there's always leftovers, and everyone can take theirs home."

Chef Matt Bernero of Hawksmoor New York has long been anti-turkey for Thanksgiving, and says dry-aged beef is a perfect alternative. "While not a traditional Thanksgiving offering, I love the communal feeling of placing a sharing steak in the middle of a table and watching everyone take from it."

His favorite cut is rib-eye, which he lets get to room temperature before seasoning it simply with a healthy sprinkle of sea salt.

"To get a nice char and caramelization, cook it under the flames of your broiler in your home oven," he says, adding that the perfect side dish is still buttery mashed potatoes, made from Yukon gold potatoes and mixed with cream, cultured butter, and chives. "Plus," he adds, "you can save the drippings from the beef and top the mashed potatoes with it for an extra layer of flavor."

Mentzer says they've ordered more duck and goose for their retail stores this year, as both are a great alternative to turkey. Chef Amy Yi, culinary director of Genuine Foods, agrees. "Thanksgiving is often centered around the roast turkey, but I think roast duck is a fantastic option," she says. "Duck meat is rich, so a little goes a long way."

Tyler Akin, chef and partner at Le Cavalier in Wilmington, Delaware, also suggests duck as a turkey substitute. He makes a traditional duck à l'orange with side dishes like roasted sweet potatoes with grapefruit and baharat spice and Brussels sprouts with apple cider vinegar vinaigrette and melted leeks.

Yi pairs hers with plenty of side dishes, like roasted carrots with green olive fennel tapenade, but if you'd rather take a break from cooking this year, you can turn to the experts. "In New York City there are plenty of Chinese restaurants that specialize in Peking Duck, characterized by its thin crispy skin and often served with additional condiments and wrap," she says. "If you're in a city with this option, take advantage of it, and relieve the kitchen of any last minute swap snafus."

Outsourcing the preparation of your roasted duck, though, would deny you the pleasure of adding the extra duck fat to dishes like the mashed potatoes, or the next morning's fried egg sandwich, says Mentzer.

"My favorite Thanksgiving we have ever hosted was in 2020," says Katie Button, chef and co-owner of Curate Tapas Bar, Curate at Home, La Bodega by Curate, and Curate Wine Club in Asheville, North Carolina. "It was all outdoors and we cooked and gathered with our pod and it was a perfect afternoon."

"My husband, Felix, is from Spain and he hates turkey and does not understand why we eat it," says Button. She's spent years in pursuit of the perfect turkey—spatchcocking it, doing a dry brine, smoking it on the grill—and while it was the best bird she's cooked, it was also "an enormous pain and incredibly labor intensive," she says. "Pro tip: if you are going to spend a lot of time on one dish, it should be the ultimate one-pot beauty that has your veggies, protein and rice," she says. "Paella is the brilliant showstopper and it is the perfect for gathering friends together at Thanksgiving or any holiday."

Button prefers to make her paella on the grill, which will free up valuable oven space (save that for baking pies.) Perhaps the best part? "It's a one-dish clean up and it's very participatory," she says. "Everyone can help and it's a fun way to get everyone at your gathering, from kids to adults, to take part. Serve it with aioli, lemon wedges and some easy apps" for a festive, delicious meal—"all without having to deal with the hassle of defrosting and cooking a massive bird."

Stay with us! Meat loaf doesn't typically conjure the pomp and circumstance of the Thanksgiving feast, but it can be a bit of a blank canvas for creative and delicious ingredients. Rastelli's is making a few different options, including a ground turkey meat loaf with sundried tomatoes or dried cranberries. Thick slices will go atop a mound of mashed potatoes in the prepared food section, meant for smaller Thanksgiving celebrations. 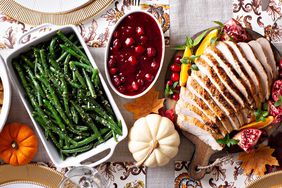 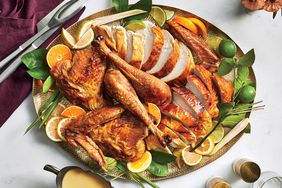