Your new favorite food is pigeon.

Ryan Grim is the former Digital Director of Food & Wine. He was previously the Editor in Chief of Extra Crispy and the Managing Editor of Vice Magazine.

When's the last time you chowed down on some pigeon? Like really got in there and picked those tiny bones clean?

For me, it wasn't long ago in downtown L.A., where about a hundred guests gathered for a dinner produced by American Express Centurion. Chef Christopher Kostow, from the three-Michelin-starred Restaurant at Meadowood in Napa Valley, assembled a brilliant menu: chestnut beignets, hakurei turnips, Kostow's signature cheese-inside-the-candle trick dessert. But the dish I couldn't stop thinking about was the squab breast. Served in a conical cabbage, the entree was a play on a pithivier, which would ordinarily use puff pastry to surround the protein. As I ate the dish I kept thinking, Man, squab is the absolute best. Why don't I cook more squab?

"People are kind of afraid of it," Kostow recently told me over the phone. "There's a lack of familiarity with squab." Fair — I am low-key afraid of cooking squab. There's also the price: A one-pound, single-serving squab can go for up to $28, whereas you could get a pound of quail for around $16. Then there's the fact that after people see a street pigeon nibble on a cigarette butt in a gutter, they might not be dying to cook and eat a pricey farm-raised one, even though it's not the same animal. "It's a bit of a chicken and egg thing," Kostow said. "If it's not something commonly found in stores, people aren't going to use it. And stores aren't going to stock it unless they feel like people are going to use it."

Considering how delicious squab can be, it's a shame it isn't more mainstream. But that wasn't always the case. As this Popular Science story recounts, squab used to be one of the most popular protein sources in the United States, only to be supplanted by chicken in the mid-20th century.

I called D'Artagnan Foods founder and squab stan Ariane Daguin to see if she could shed more light on the sorry state of squab in the U.S. Daguin was quick to remind me that squab isn't your garden-variety pigeon. It's a young (usually 28-day-old) pigeon that has never flown before. Once it's over a month old or starts flying, the bird is no longer considered squab caliber. As for its niche status and corresponding pricetag, the biggest factor is the way the animal needs to be raised. "You cannot do artificial insemination, like you do for turkey or chicken. So you actually need a daddy and a mommy every time you want a baby. It is a long process and it is much, much more intensive than any other poultry," she told me.

Pigeon parents share egg-brooding responsibilities and couple up for life, which is also uncommon in the poultry family. With chickens, ducks, and geese, only the females brood. "For squab, if you lose the male or the female, then the other one is never going to couple again," Daguin said. "And you lose both breeders." So basically, pigeon biology and the expense of pigeon heartbreak have kept squab from becoming a factory-farmed protein, which in turn keeps prices high in the U.S. Curse you, poultry market forces!

So let's say you have a squab-worthy occasion on the horizon, and you want to cook some, perhaps this Roast Squab Breast with Two-Grain Porridge. Cool, cool. The first thing you should do is call your butcher at least a day before to preorder it, since most places won't have squab sitting out. Then you should brush up on the basics. Kostow and Daguin were kind enough to share some cooking advice for the squab-curious:

As for the chances of squab breaking out of its niche and becoming more popular in American kitchens? Daguin isn't very optimistic. "Right now, it's a little bit stuck," she said. "Most of the sales I do, like 95%, 96% are to restaurants. Very, very few people buy it online." Kostow would agree. "I mean, at the end of the day, it's pigeon," he said. "People see pigeons flying around, rooting around the garbage cans and shit, so I doubt it." 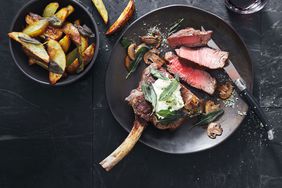