Butter Mochi Will Help You Win Every Potluck

Butter mochi is purely an invention of the islands and it is borne from the multicultural roots of Hawaii’s first potlucks and the mystical union of rice flour, butter, coconut milk, and sugar.

Huli huli chicken, teriyaki steak, poke, coconutty butter mochi, all piled onto a flimsy plate—their cultural origins barely given a second thought as they are consumed at my family's backyard luaus on Oahu. Everything is eaten with rice and a generous scoop of my Auntie Arlene's mayonnaise-laden macaroni salad, which surpasses all other macaroni salads with its use of canned tuna, peas and hard-boiled eggs.

There is no potluck without Auntie Arlene's mac salad. There is also no family get-together without fried saimin, California rolls, Auntie Dianne's spinach and water chestnut dip and homemade lavosh, tako poke, butter mochi and well, if it's Thanksgiving, a turkey. When I pause to think about the origins of the dishes to describe to mainland friends, I say we have Hawaiian-Filipino-Portuguese-Japanese-Okinawan-Chinese-Irish-American potlucks.

The lines between these cultures are blurred from dish to dish, blended together in flavor, ingredients and technique. But the most blended dish of all? Butter mochi.

On the mainland and away from my family, my contribution to a potluck is always butter mochi. It is not steamed the way Japanese daifuku mochi is. It resembles the rice cakes you might find at some dim sum tables, but it doesn't stick to the roof of your mouth. It's baked but it's unlike anything baked with wheat flour.

Butter mochi is my stalwart, always-a-hit, never-fails, go-to potluck contribution. Butter mochi is purely an invention of the islands and it is borne from the multicultural roots of Hawaii's first potlucks and the mystical union of rice flour, butter, coconut milk and sugar.

The ingredients for a standard butter mochi recipe read like the legacy of my home and of my family. Coconut milk–coconuts are ubiquitous in Hawaii, just look around. Rice flour, milled from the short grain rice that became our main starch due to the immigration of the Japanese. Sugar, the crop that brought so many of my ancestors to the islands.

And butter! What would we do without butter? Our beloved malasadas were introduced by the Portuguese, who would use up the butter and sugar before Lent by making them into malasadas. We've since learnt to not wait until almost-Lent to eat malasadas.

Butter, sugar, rice flour, coconut milk (and also, whole milk, eggs, baking powder and maybe vanilla). Put all these ingredients together to make butter mochi? Who thought of such a thing? My guess is it was the Filipinos. Butter mochi is probably a descendant of bibingka, a Filipino cake that marks celebrations and is also borne from the magic of rice flour and coconut milk (though sometimes it's casava), butter mochi is now firmly, of Hawaii.

In Hawaii, butter mochi is more popular than brownies, though it's baked into similar tins. You will see more butter mochi than brownies at bake sales, though we also love brownies. It is the simplest, humblest, most magical dessert. I like to bake them into oiled petit fours pans, which renders individual pieces of butter mochi into crisply molded flowers. After they have baked and once the pans are cool to the touch, I'll coax the little flowers out of their homes and drag their bottoms through toasted sesame seeds. This is the painstaking method, the way I'll make butter mochi for you when I am trying to impress you.

For a potluck with friends (the people I don't need to impress), I'll mix up the butter mochi batter and pour it into a baking pan, lined with parchment. After dinner, I'll slice it into squares with a butter knife and you'll line up at the table and help yourself. Perhaps you'll mistake it for cornbread, because it's also perfectly golden yellow, and wonder out loud why this wasn't on the table at the start of the meal. Perhaps you'll grab a little plate and scoop some ice cream onto it, which will soak into the crumbs of the butter mochi. Maybe you'll slice a square in half and put it directly into your mouth.

The latter is how I would do it. Standing at the kitchen table, chatting with people I love and people I've just met, cutting little bites of butter mochi, sated from all the other potluck foods, but unable to resist.

Get the Recipe: Butter Mochi
Was this page helpful?
Thanks for your feedback!
Tell us why!
Related Articles 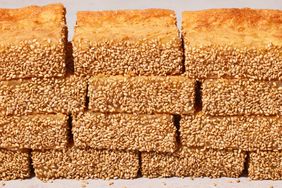 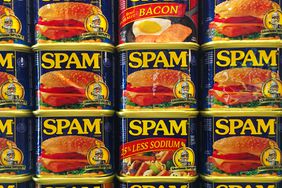 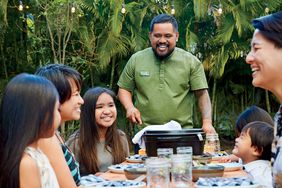