Whether you call it mock, faux, or plant-based meat, vegetarian substitutes for beef, pork, chicken (and even seafood) have a long history in the greater China region—and a delicious future.

Clarissa Wei is a Taiwanese-American freelance journalist based in Taipei. She's contributed to The New York Times, New Yorker, Eater, National Geographic, Bon Appetit, Los Angeles Times, and others. She has produced award-winning video documentaries that have been syndicated on Discovery Channel Asia-Pacific.

When Lee Mee Ng immigrated from Taiwan to New York in the 80s, she found herself longing for Taiwanese food. But instead of deep, earthy bowls of beef noodle soup or the meaty pork braises that the island is known for, Ng, a vegetarian, pined after mock meat. "There were so many different varieties of mock meat to try like mock chicken, beef, and seafood. The temples always cooked the most delicious food for us," her daughter Lily Ng says.

To compensate for her homesickness, Ng decided to sell her own line of vegetarian imitation meats, and partnered with manufacturers in Taiwan to develop and import many of the dishes that she grew up with. In 1994, she opened up May Wah Vegetarian Market in New York City's Chinatown, and stocked it full with packets of imitation steak, spare ribs, shrimp, mutton, and grilled eel—all made some sort of combination of soy, seaweed, wheat gluten, or mushrooms.

It didn't land well. "Unfortunately it was not a good beginning for us. People were hesitant about trying these products," Lily says. "They wanted to stick to tofu and beans, and it was very hard for us to get people to try it. We ended up giving a lot of stuff away."

Two decades later, high-tech meat analog brands like Impossible and Beyond Meat have now hit the mainstream with their versions of faux meat, and Ng's store—rebranded to Lily's Vegan Pantry—no longer faces the same skepticism as it did before. "It was slightly frustrating because we've been in the market for so long," says Lily. "I struggled with it, but then I spoke to my mom about this whole situation— that Asians created this idea of mock meat. She told me that it doesn't matter who created it, as long as it's saving animals. We all have the same goals."

Plant-based meats have long been a part of the culinary scene in the greater China region for centuries—a tradition derived from Buddhist monasteries in dynastic China. To learn more, I traveled from Taipei to the Ling Jiou Mountain Buddhist Society in northeastern Taiwan. A gorgeous campus perched to the top of a hill overlooking the Pacific Ocean, Ling Jiou is one of the many monasteries in Taiwan that abides by a strict vegetarian diet. "Faux meat was originally intended for people in transition to vegetarianism," explains Shih Chang-ren, the head nun at the monastery. Taiwan, which is 95% ethnically Han Chinese, has a strong tradition of Buddhism by way of China and other Chinese folk religions like Confucianism and Taoism.

"Faux meat was originally intended for people in transition to vegetarianism," explains Shih. "Buddha did not say you cannot eat meat," says Shih. "He just said you can't kill a life." Vegetarianism was formally adopted by Chinese sects of Buddhism in the 6th century, upon an edict by Emperor Wu of the Liang Dynasty who urged monastics to stop eating meat. It wasn't until the 10th to 13th century that faux meat emerged as a specialty—a specific type of cuisine catered primarily to Buddhist pilgrims or visitors to monasteries.

"A lot of Chinese Buddhists also subscribe to folk religions like Confucianism and Taoism, and so when they go to the temple or when there's a special holiday, they have to offer animals like chicken and fish to the gods," Shih explains. "So instead of sacrificing an actual animal, they bring imitation meat."

Today, many plant-based companies can now isolate individual compounds to mimic the structure and mouthfeel of a chunk of meat. Traditional faux meat producers did not have that technology, but still strived to make their products look and taste realistic as possible. Thus, bean curd was smoked and marinated in sauce to mimic the smokiness of Chinese smoked duck, and tofu fillets were wrapped and seasoned with crinkly seaweed so that it looked and tasted like a fish filet with a layer of skin around it.

Another major distinction is that many faux meat dishes in the Chinese tradition do not contain alliums—a pungent genus of plants that includes onion, garlic, scallions, shallots, leeks, and chives. They're all considered harmful aphrodisiacs. "Buddhist precepts mandated that we can't eat alliums," explains Shih. "They have a distinct and strong flavor that will raise our endocrine levels and increase our levels of desire and lust."

But while imitation meat may have started in Buddhist temples, the day-to-day diet of a monastic isn't actually inundated with it. For the monastics at Ling Jiou, every meal is a meditation and should be as minimalistic as possible. I arrive just in time for lunch, where the nuns are gathered quietly and seated in neat rows. The meal is kicked off with a prayer, and enjoyed in complete silence.

Meat analogs are considered a bit too flashy for daily consumption, and are typically reserved for special events or served at meals attended by guests. Monks and nuns are usually fed more simple dishes, and today for lunch they have bamboo shoots with wood ear mushrooms, a flatbread, and a braised tofu dish with ginger and a shock of goji berries. Rice is the main carb of choice, and almost every meal includes a warm soup.

"You want it to be simple. Food is not something you should desire," explains Shih. "But if we have an important holiday like Buddha's birthday or Chinese New Year, then our spread is more abundant."

It's during these special occasions that the faux meats are brought out on silver platters, like soy-based "steaks" dressed with black pepper sauce and a braised "eel" made with tofu and seaweed. The base of most of these dishes is a tofu-based mash. Made mostly out of crushed firm tofu, it is bound together with a sticky pink paste made from isolated soybean protein and wheat.

"That's what gives it its fibrous and chewy texture," says Shih Pao-chin, the culinary director of the monastery (no relation to Shih Chang-ren; many Buddhist monastics adopt the last name Shih when they're initiated into a monastery). I hang out in the kitchen with Shih, where she has the head chef demonstrate the technique. The mash is mixed and compacted together with diced shitakes, water chestnuts, ginger, carrots, butter, and flour, then seasoned with salt, sugar, soy sauce, white pepper, and sesame oil. The final product is incredible; when grilled or deep-fried, it has the resistance and chew of a real meatball.

Delighted to show us the mash's versatility, Shih plates it for me three ways: as a faux steak dressed in black-pepper sauce, as a hamburger, and as a traditional Chinese-style meatball served in broth.

The monastery's restaurant—which caters primarily to visitors—also has a regular rotation of mock meat products. They have pig blood cake—a popular Taiwanese snack—made with sticky black rice and seaweed. There's also vegan wonton soup made with faux soy-based meat and a diced mushroom and tofu dish on rice that looks and tastes eerily similar to Taiwanese braised pork over rice. The underlying theme is that almost every meal contains soy. Soy is the foundation of the mock meat industry in Asia, and because it is native to Asia, it's an ingredient that comes naturally to chefs in the region.

"Soy-based products don't have an inherent flavor so will we add an abundance of spices and flavors to liven it up," says Wu Meng-dian, a chef at a Pu Tai Senior High School, an exclusively vegetarian Buddhist school in Nantou, Taiwan.

Wu is in charge of cooking daily meals for the students at Pu Tai, and he says he has adopted a lot of techniques and sauce combinations commonly used to cook meat. Because soy is so normalized in Chinese cooking, it is easy to swamp it in lieu of real meat. Deep-fried tofu balls, for example, can be slow-braised with soy sauce and fermented black beans. He likes to channel the taste and flavor of orange chicken by putting that same sticky, sweet sauce on chunks of tofu or seitan.

And as food technology develops around the world, faux meats in Asia are also becoming more advanced. "We can now isolate the protein from soybeans. This is a technology that only started up 10 years ago," says Hsieh Chi-feng, the owner of Hung Yang Food, which has been manufacturing mock meat in Taiwan for two decades now. Hsieh, whose products are sold at the gift shop of the Ling Jiou monastery, manufacturers vegan jerky and "pork" floss, the latter of which is traditionally sprinkled over congee as a topping.

Unlike Ng in New York City, Hsieh has never had a problem with getting people to try his products. By virtue of its age, the market for imitation meat in Asia is far more developed in the West, though there has always been a small but distinct array of vegetarian Chinese restaurants in the States.

But whereas plant-based burgers are on their way to becoming a universal option in burger joints around America, vegetarian Chinese food is still very much its own separate cuisine in Asia. Faux meat dishes are either found in monasteries or restaurants that are exclusively vegetarian. They rarely appear as a meat substitute in restaurants catered to the mainstream.

"I enjoy that we have a very long history of vegetarian cuisine, but in some ways, it's not easy to be a vegetarian here. Everything is so separate," says Darice Chang, a Taiwanese-American vegan activist based in Taipei. "In the West, we just try to emulate dishes that are already meaty and we just give vegan replacements. Whereas in Taiwan, because of the monks and religions, the cuisine is very much its own thing." 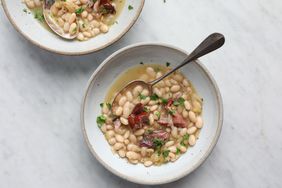