Maneet Chauhan shares her recipe for vada pav and two other Indian street food classics in this week’s episode of Chefs at Home.

After season one wrapped earlier this year, season two of Chefs at Home is finally here—and the first episode kicks off with none other than chef and cookbook author Maneet Chauhan. Over the course of three videos, she prepares three different Indian street food dishes. The first is vada pav, a snackable sandwich featuring a potato fritter and two different types of chutney, and Chauhan says that if you start off your day with one for breakfast, "I promise you, your entire day is going to be remarkable." She also makes two egg dishes, egg bhurji (spiced scrambled eggs), and finally, a ros omelet, which she describes as a masala omelet in a coconut curry sauce. As she cooks, she shares plenty of helpful tips, too, from making sure you use cold eggs to getting the right level of heat in your chutneys.

Check out each of Chauhan's how-to videos and follow along below so you can make the dishes at home.

First up is a vada pav, one of Mumbai's most popular street foods. It consists of a potato fritter, or vada, served on a bun with two chutneys—coconut and spicy green chile. Chauhan starts off by making the vada first, saying that you'll want to shape each fritter so that it's proportional to the size of the buns, or pav. Then, you'll dunk the vada in batter, shaking to remove excess, and fry them up until they're golden-brown.

Chauhan also makes both of the chutneys from scratch—she likes to add one chile to start and incorporate more heat as needed. Once the chutneys are made and the vada are fried, you can assemble the sandwiches. Chauhan takes brioche buns that she toasted in butter and slathers the coconut chutney on the base. The vada goes on next, followed by the green chutney on top, then pomegranate seeds, some cilantro, and finally, a deep-fried serrano chile. All that's left to do is squish the sandwich and take a big bite.

Get the Recipe: Vada Pav

In this next segment, Chauhan prepares egg bhurji (also spelled "bhurjee"), spiced Indian scrambled eggs that she grew up eating and now makes every Sunday for her kids. It all starts with ghee in a pan, where you'll toast some spices and aromatics. In the meantime, crack and prepare the eggs—make sure they're cold so you get fluffier results.

The tomatoes go into the pan next, along with some salt. Then, you'll pour in the egg mixture. Take care to use medium heat, not high (otherwise the edges will burn). After some additional seasoning, the eggs are ready to go, and there's a few different ways you can serve them. A paratha is traditional, Chauhan says, and she serves the eggs on them with a dollop of butter and achaar. But you can also spoon the eggs over toast and top them with pickled peppers and cilantro, or, sandwich the eggs between a bun and top with Indian ketchup. Whichever route you choose, you'll have delicious results.

Get the Recipe: Egg Bhurji

Lastly, Chauhan makes her recipe for a ros omelet, a dish she says you can find in the western coastal region of India, in Goa. You start off by making the ros first (ros means gravy in Hindi), and then, prepare the omelet. Both components start with coconut oil in a pan, so that the flavors are echoed throughout. Just like with the egg bhurji, make sure you keep your pan at medium heat when cooking the eggs to avoid burning the omelet.

To serve, ladle the ros on a plate, and then place the omelet on top, spooning even more ros on top. Some thinly sliced onions, cilantro, and lime wedges finish it all off. If you'd like, Chauhan says you can enjoy it with a side of steamed rice, and some bread, too.

Get the Recipe: Ros Omelet

Stay tuned for our next installment of Chefs at Home featuring chef Brandon Boudet. 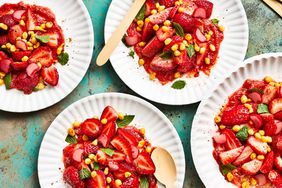 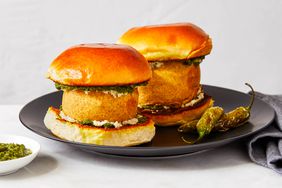 28 Egg Recipes for Breakfast and Beyond 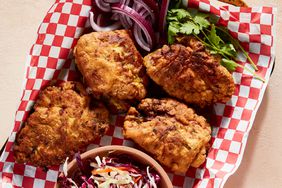 How to Make Your New Favorite Fried Chicken