All you need is a microwave and a plate.

When you need toasted nuts for a recipe, typically, there are two options—using the oven, or cooking them in a skillet. Both have drawbacks. Oven-toasting produces even results and allows you to toast large quantities at once, but it's pretty time consuming. Skillet-toasting, on the other hand, is great for producing small batches of toasted nuts, but the results are uneven and you can burn them if you get distracted.

To speed up the process and ensure even cooking, our Culinary-Director at Large, Justin Chapple, came up with the ultimate Mad Genius Tip—toasting nuts in the microwave. The unconventional method can produce perfectly toasted nuts in just three minutes, saving you time and effort. He demonstrates the process step-by-step in our latest MGT video.

Justin starts by grabbing a microwave-safe plate and spreading almonds on it in an even layer—the trick also works for pecans, walnuts, or another nut of your choice. Then, he brings everything over to the microwave and cooks the nuts on full power for three minutes. Every minute, he pauses the process to mix up the nuts so that they toast evenly, and also removes one almond so he can show the toasting progression at the end of the video. As it turns out, it starts to kick in at the two minute mark—the almond still appears raw one minute in, slightly toasted at two minutes, and perfectly toasted by the end of three minutes.

In the end, Justin says the nuts should come out lightly browned on the outside and incredibly fragrant. He compares the microwave-toasted almonds to ones he toasted in the oven and skillet, and he finds that the results are just as good as the oven (with much quicker results), and even better than the skillet-toasted nuts.

Once the nuts are done, you can use them in a salad, as a topping on yogurt, or enjoy them as a healthy snack on their own. And there are more Mad Genius microwave tips to explore, too. Justin demonstrates how to dry herbs in the common appliance; you can also make brown butter in it, as a foolproof alternative to the traditional skillet method. 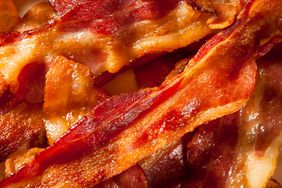 How to Cook Bacon in the Oven