Justin Chapple makes Stuffed Clams with Linguiça and Arugula on this week’s episode of Mad Genius.

Summer seafood comes in many delightful forms, from lobster rolls to fresh oysters and fried fish. If clams are your favorite, this episode of Mad Genius is for you. Our Culinary Director-at-Large, Justin Chapple, is sharing his recipe for Stuffed Clams with Linguiça and Arugula. It's part of a recipe package from our May 2022 issue, inspired by some of Justin's favorite dishes that he's enjoyed in Cape Cod, Massachusetts.

"The fish shacks are plentiful, and the eats are good, with lots of influence from the Portuguese and Azorean immigrants who settled on the tip of the Cape during the mid-1800s," he wrote. "Although there's nothing like sitting on the beach and eating clam stuffies from a box, I've recreated some of my favorite dishes to ensure an escape to the Cape is never further away than my kitchen."

For Justin's version of clam stuffies (aka stuffed clams), littleneck clams are cooked and finely chopped and mixed with garlicky Portuguese linguiça­, breadcrumbs, arugula, and a few other ingredients to make a flavorful filling. That filling is then stuffed into half clam shells and baked until it gets very lightly browned. Served with lemon wedges for a bright squeeze of acidity, the stuffed clams are summer encapsulated in a shell. Don't let this season pass you by without giving the recipe a try.

Sound good? Read on for Justin's step-by-step method and follow along with the video above.

First Up, Cook the Clams

Start by combining clam juice and dry white wine in a large saucepan and bring the liquids to a boil over high. Then, add the scrubbed littleneck clams — gently, so the shells don't crack — cover the pot, and let 'em steam until they start to open, which should take a few minutes. Then, uncover the pot and transfer the clams to a large rimmed baking sheet using tongs so they can cool for a few minutes.

Once cool, toss any clams that didn't open (those aren't safe to eat). Don't discard that cooking liquid either, because some of it will be used in the filling. Instead, carefully strain it through a fine wire-mesh strainer into a heatproof bowl.

Next, you'll want to remove the top shell from each clam; do this over the bowl of reserved cooking liquid so you can catch any juices left behind in the shells. Discard the top shells, then remove the clams from the bottom shells and finely chop them. Set both the chopped clams and the reserved cooking liquid aside, wipe the baking sheet clean, and then place the bottom shells on the baking sheet.

After you've prepped the breadcrumbs and sausage, melt some unsalted butter in a large skillet over medium and add the chopped yellow onion, celery, and jalapeño. Let them cook for a few minutes until they're just softened, and then add the linguiça. Once the fat has rendered, stir in the chopped clams, chopped arugula, and some of that reserved clam cooking liquid (you can discard the rest). Then, remove the skillet from the heat and add the mixture to the bowl of breadcrumbs, along with some kosher salt and black pepper. Give the mixture a stir so everything is well-combined.

Grab the baking sheet of clam shells you set aside before and lightly, evenly pack them with the linguiça stuffing. Next, cover them with aluminum foil — at this point, you can refrigerate them overnight if you'd like, or bake right away. (If refrigerating overnight, just make sure to bring them back to room temperature before baking.) Once ready, bake them in a preheated 350°F oven for about 20 minutes until they're hot. Then, remove the foil and give them about another five minutes in the oven so the tops get very lightly browned. After that, all you need to do is transfer them to a platter, gather some lemon wedges for serving, and you're ready to eat.

"It's just so delicious," Justin says. "I don't know what else to say, it's so freaking good."

Get the Recipe: Stuffed Clams with Linguiça and Arugula
Was this page helpful?
Thanks for your feedback!
Tell us why!
Related Articles 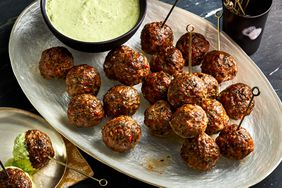