Add These Dreamy Mashed Potatoes to Your Fall Dinner Lineup

This week on Mad Genius: Home Edition, culinary director-at-large Justin Chapple gives mashed potatoes the "herbal treatment." His herb-scented mashed potatoes are flavored with sage, rosemary, garlic, and plenty. of. butter. The recipe is broken down into three simple steps, and in just one hour, you'll have a gorgeous, fluffy dish of potatoes that pairs perfectly with all kinds of meals. Read on for Justin's step-by-step method and follow along with the video above.

Get started with the potatoes

First, peel five pounds of Russet potatoes, rinsing them and cutting them into two-inch pieces. Bring them to a boil, covered with water, in a large pot—add a small handful of salt, and reduce the heat, allowing them to cook for about 20 more minutes until they're tender.

While the potatoes cook, Justin prepares the "milk bath" composed of whole milk, heavy cream, unsalted butter, fresh rosemary sprigs, fresh sage sprigs, and two crushed garlic cloves. (If you want to use half and half to replace the cream and milk, you can.) Combine it all in a pot, let the butter melt, and bring it just to a simmer. Then, remove it from the heat and let it steep for 15 minutes so all those herby flavors infuse in.

Grab the ricer and mix it all together

Once the potatoes are done and drained, Justin puts them through a potato ricer so they get nice and fluffy—once you try ricing them, "you"ll never do it any other way," he says. Take the herbs and garlic out of the cream mixture and pour it into the potatoes, folding it in and taking care not to over-mix. Don't forget to season them with kosher salt and freshly ground pepper.

After the potatoes are in the pan or baking dish, grab a spoon and use the back to create a swirled design on top. Then brush on melted butter and throw them in the oven under the broiler for roughly eight minutes. Be sure to watch your potatoes. (You definitely don't want them to burn.)

The end result is fluffy, creamy, browned-on-top potatoes that you'll want to have on repeat. (They're in constant rotation at my house, so that's not an exaggeration.) Grab the recipe below so you, too, can make them a staple at your table this fall.

Get the Recipe: Herb-Scented Mashed Potatoes
Was this page helpful?
Thanks for your feedback!
Tell us why!
Related Articles 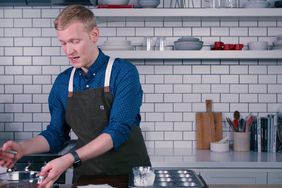 How to Bake Without Cupcake Liners