Did we mention it includes three different kinds of cheese?

Cacio e Pepe and pie are both satisfying, delicious dishes on their own. But on this week's episode of Mad Genius, Food & Wine Culinary Director at Large Justin Chapple takes it to the next level and combines the two into one cheesy, ultra-comforting meal.

"Wouldn't it be great if you could literally eat a slice of your favorite pasta?" he says. "Well you're in luck, 'cause that's exactly what we're gonna be eating today. We are making my Cacio e Pepe Pasta Pie."

The recipe features three cheeses—Fontina, sharp white cheddar, and Parmigiano-Reggiano—mixed with cooked spaghetti, milk, eggs, kosher salt, and, of course, plenty of ground black pepper. It all gets poured into a springform pan, topped with even more cheese, and then baked and broiled until it's melty and browned on top. It takes an hour and 30 minutes all together, so you can easily pull it off on a weeknight or weekend, too.

To make it at home, read on for Justin's method and follow along with the video above.

Prep the Pasta and Cheeses

The first step for this pasta pie involves a crucial ingredient—the pasta itself. Cook it in a boiling pot of salted water until it's al dente, and shred the Fontina and cheddar cheeses on a box grater in the meantime. To make the shredding easier, Justin recommends freezing the cheese for 15 minutes first.

Once the pasta is done and the previously mentioned two cheeses are grated (don't forget to reserve some for sprinkling on the pie), you're all set to build your Cacio e Pepe Pasta Pie. Grab a large mixing bowl and add the spaghetti, milk, grated Parmigiano-Reggiano cheese, lightly beaten large eggs, black pepper, kosher salt, and 1 1/2 cups each of the Fontina and cheddar. Mix it all together and then pour it into a buttered nine-inch springform pan—Justin likes to wrap foil around the bottom of the pan on the outside to catch any potential leaks. Make sure the pasta mixture is in an even layer.

Sprinkle the remaining cheddar and Fontina on top of the pasta and then bake the pie for 35 to 40 minutes in a 425°F oven until the cheese is melted and bubbling. Then, turn on the broiler and give the pie a quick blast for two to three minutes.

After the pie has emerged from the broiler browned on top, transfer it to a rack and let it cool for 15 minutes before removing the springform ring and cutting yourself a slice. If you'd like to pair a wine with your meal, we'd recommend a silky, concentrated Italian red.

"Stop everything," Justin says after trying the pie. "This is incredible. We've got the nuttiness from the Parmigiano-Reggiano. We have the gooey creaminess from the Fontina, and then we've got that sharp tang from the cheddar. That coarse freshly ground black pepper just adds so much flavor and texture." He continues, "Whether you're craving pie or mac and cheese, or if you're just craving something super comforting and cheesy, this recipe checks all the boxes."

Get the Recipe: Cacio e Pepe Pasta Pie
Was this page helpful?
Thanks for your feedback!
Tell us why!
Related Articles 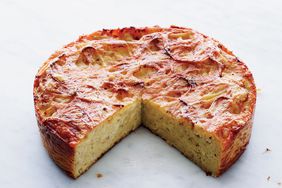 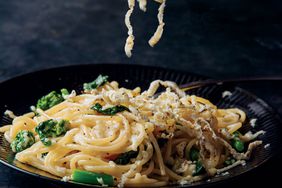 The Cheesiest Pasta Starts With a Whole Lot of Butter