Make sure you don't forget the pale ale.

A corned beef and cabbage meal typically takes a long time to cook. Why? Because corned beef comes from brisket, a tough cut of meat. You need its connective tissue to break down so you can have tender results. Some like to braise their corned beef in an all-water liquid, with various spices and salt; others add beer to the mix to further tenderize the meat.

Food & Wine Culinary Director-at-Large Justin Chapple's version takes the beer route and, using pale ale, he cooks the corned beef over low heat for a few hours until it's super-tender. He also pickles the cabbage and pairs it with potato salad—the cabbage is particularly low-lift, since it only has to sit in the fridge with the potatoes and pickles on its own. Here are the key tips for making the dish, compiled from our test kitchen.

Beer contains acids and tannins, which break down meat and tenderize it. It's the same idea as using citrus, wine, or vinegar in a marinade. In this case, Chapple uses two bottles of pale ale to braise the beef, combining it with onion, garlic, bay leaves, and 12 cups of water.

This style of cooking is all about infusing flavor and tenderizing the meat—in about two and a half hours, you'll have results.

Chapple's recipe prepares the cabbage and potatoes separately from the beef. Instead of boiling the potatoes and then flavoring them, you do it all at once, adding white vinegar—and a lot of it—to the pot, along with mustard seeds, sugar, salt, and water. Once they're done cooking, you transfer them to a heatproof bowl and let them cool completely in the liquid, which further infuses the flavor.

A note: the reason red potatoes work so well for this recipe is because they have a high starch content, which allows them to hold together after cooking and still have a creamy bite.

After the potatoes are cooled, stir in the cabbage and refrigerate the mixture for one hour, stirring occasionally. It will pickle as it sits.

Always slice against the grain

When you're done cooking the corned beef, make sure you slice against the grain of the meat. This will produce a more tender result; if you slice with the grain, you'll find a more tough and stringy texture when you chew. Since you've spent so much time cooking and tenderizing the beef, it would be a shame to undo all that hard work.

You're likely to have leftover corned beef, and you have a few options for how you can use it. You can always eat it as is; however, we have some fun ways of repurposing the meat, from making a tasty corned beef hash with fried eggs to "brat reubens" on a hoagie roll. (Reuben benedicts are also a pro move.) 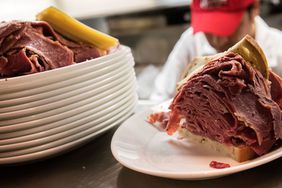