Chef Claudette Zepeda makes the recipe on this episode of F&W Cooks.

The Caesar salad is a simple and beloved classic — crunchy romaine lettuce, creamy anchovy-laced dressing, and a generous supply of croutons that combine for a textural, super-savory masterpiece. In this episode of F&W Cooks, chef Claudette Zepeda honors the salad's roots in Tijuana, Mexico, with her recipe for Baja-Style Caesar Salad, which includes traditional ingredients and a few personal twists.

"The Baja Caesar salad — obviously being from Tijuana, the border region, this is a salad that's near and dear to my heart," she says.

Zepeda swaps out Parmesan cheese for aged Cotija, which she includes in the dressing and also uses as a garnish for the salad. She also tops it with chicharrones instead of croutons, crumbling the fried pork rinds on top for an extra crunchy, salty punch. As she makes the recipe, she demonstrates how to prepare it tableside, which is how the salad is served in Tijuana.

This show-stopping salad is ready in just 15 minutes. To make the recipe at home, read on for Zepeda's method and follow along with the video above.

The dressing is key in Caesar salad. Zepeda starts hers by whisking together finely chopped garlic cloves, finely chopped oil-packed anchovy fillets, and Dijon mustard ("you can't get fancy with it," she says about the mustard) in a medium bowl. The Worcestershire sauce and fresh lime juice — not lemon juice! — are whisked in next. After that, whisk in the pasteurized egg yolk, black pepper, and kosher salt.

The olive oil goes in next; you'll want to slowly stream it in while whisking constantly in order to achieve a thick and creamy dressing. Finally, whisk in some Cotija cheese.

After the dressing is done, add the romaine leaves (separated from small romaine lettuce hearts) to the bowl and toss 'em so they're evenly coated. Then, all that's left is dividing the lettuce among four plates and adding the garnishes. Zepeda notes that in Tijuana, you'd use croutons made from a baguette, but she opts for the crunchy chicharrones. With a final shower of grated Cotija, the Baja-Style Caesar Salad is ready to eat.

"Wow," Zepeda says after trying the salad. "That's my youth in a bite."

Get the Recipe: Baja-Style Caesar Salad
Was this page helpful?
Thanks for your feedback!
Tell us why!
Related Articles 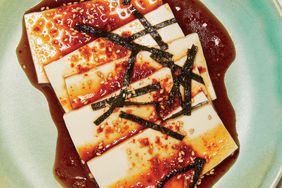 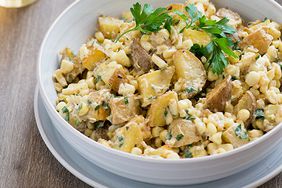