Chitra Agrawal prepares the kidney bean curry and two other recipes on this week’s installment of Chefs at Home.

When you make a dish and have plenty of leftovers, that's always a bonus. And when you can take those leftovers and transform them into new dishes? Even better. In this week's installment of Chefs at Home, Chitra Agrawal—co-founder of Brooklyn Delhi and cookbook author—starts off by showing how to make rajma, a North Indian and Pakistani kidney bean curry that she learned from her father. Then, she takes that same rajma and uses it to make two different dishes, rajma veggie burgers and rajma tacos, which are easy and quick ways to repurpose the curry.

Read on for Agrawal's step-by-step method and follow along with each episode below.

The rajma starts by heating a high-heat, neutral oil in a pan over medium-high heat, and tempering some spices. The onions go in next, along with a little turmeric, and when they've softened, ginger and garlic go in too (you can also add green chiles here if you want more heat). You continue to add spices and seasonings, layering flavor, along with the tomatoes. You can either make your rajma more chunky or blend it so it's smoother, as Agrawal does in the video. Just remove the whole spices beforehand if you do so.

Next, the beans go in, and you want to simmer them until they're cooked through. Agrawal explains that the rajma will be more saucy the first day you make it, and thicker the second day, making it ideal for dishes like the burgers and tacos. In the video, she serves the rajma with a mix of basmati rice and quinoa, and tops it with plain yogurt, Brooklyn Delhi roasted garlic aachar and tomato aachar, sliced red onions, and cilantro.

"I mean there's so many different flavors," she says. "Warming spices, the tomato, the caramelized onion, the ginger, the garlic. It's really delicious. And this is rajma chawal [rajma served with rice], this the comfort food of North India."

Next up is rajma veggie burgers, a recipe Agrawal says was inspired by a black bean burger from her friend Lukas Volger's cookbook, Veggie Burgers Every Which Way. You start out by mashing up the rajma with a fork, combining it with beaten eggs, breadcrumbs, and other ingredients to form patties. You want the patties to be firm—tailor the breadcrumb amount depending on how much liquid is in the leftover rajma, and allow the mixture to sit for 15 minutes before forming the patties so the breadcrumbs absorb some of the liquid. (Don't forget to season them, either!)

You'll first cook the patties in an oven-safe skillet on the stove and then transfer them to a 375-degree Fahrenheit oven to finish them off. Once done, place them on paper towels to drain (you can also place the cheese slices on at this point so they get warm), and then assemble the burgers. Agrawal piles them on buns with butter lettuce, red onions, pickles, and tomato, as well as vegan mayo, Brooklyn Delhi roasted garlic achaar, and Brooklyn Delhi curry ketchup for condiments. The finished product is a good option to "wow any vegan or vegetarian friends of yours because this is...I think this is the best-tasting veggie burger," she says.

"Oh yeah," she says. "This is so good. I mean the raw onion really sets the rajma off, too. Super good."

Get the Recipe: Rajma Veggie Burgers

Lastly, Agrawal makes some quick tacos with leftover rajma. She warms up soft tortillas using a tawa, an Indian skillet, and uses chimta (Indian tongs) to handle them. Then, it's time to build the tacos: you'll need the rajma, sliced avocado, some chopped red onions, feta cheese, yogurt, crushed tortilla chips, and cilantro. Finish it off with your favorite hot sauce, like the Brooklyn Delhi sauce she uses.

"The warming spices from the rajma, the avocado, the feta, the fresh onion and cilantro, and the hot sauce, it's such a good combo," she says. "It's delicious."

Get the Recipe: Rajma Tacos

Stay tuned for our next installment of Chefs at Home featuring Sheldon Simeon. 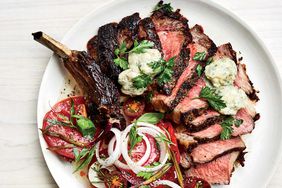 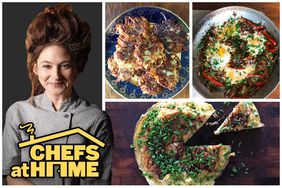 How to Make Perfect Latkes (and Use Up the Leftovers) 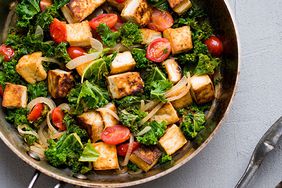