My Mom Daydreams About These Noodles

This bowl of noodles and loaf of bread became comfort, companion, and best friend for Iliana Regan's mother.

Restaurant: Elizabeth Location: Chicago At least half the menu at Elizabeth, Iliana Regan's tiny ticketed restaurant, is always inspired by the foods she gathers on foraging excursions. "And in the summer, it's 100 percent based on what I've found," she says. The self-taught chef grew up on a 10-acre Indiana farm: "We had the occasional pigs and chickens, and my mother preserved everything." Now Regan spends most Sundays in the woods, collecting ingredients that often sound a little oddball—like sassafras twigs, which she'll turn into ice cream or cake for a supremely naturalist dessert. Iliana's Obsessions Veggie-O'sRegan serves crisped chicken skin with root vegetables shaped like circles. Foraged FruitRegan sometimes hunts for the berries in the jam she serves with housemade brioche and butter. Wild StyleDeer skulls that Regan found in the woods decorate her restaurant. Dessert from the ForestPorcini ice cream comes with sassafras cake, edible moss and shaved herb ice.

My mom is a great cook. She comes by it naturally, and she is obsessed with it. My mom will be the first to tell you she has an eating disorder—then she will say it's just like how her daughter (me) is an alcoholic. So much for anonymity.

At a very young age, she found comfort in food. Her mother was cold, her father was an alcoholic, and mostly she was left alone. Some parents tell stories about walking miles to school in the cold. In 1949, at five years old, in her dirty little dress and no shoes, my mom was put on a bicycle. Her mother said, "School is that way." To hear her tell it, she never had a birthday party until she was old enough to give herself one.

Occasionally she would go to her grandfather's house, where her uncle Frank still lived. Frank cleaned my mom's face and hands, put her in fresher clothes, and brought her into the kitchen. She sat on a curved bench by a window with the small kitchen table in front of her. Frank stood on the other side of the table, a pile of flour between them.

They spent the afternoons mixing dough; my mother helped roll it out. She pinched it closed before placing it in the long loaf pan, which she had smeared with butter. After Frank put it on top of the stove, she didn't move for two hours, until it was ready to bake. She read Archie comics as she waited. Every couple of minutes she looked up to see the level of the loaf, because she knew that when it peeked from the top like a cloud, it was ready. Frank gave her mittens to wear while she put it in the oven. The hiss and crackle of the logs from inside the stove were the perfect accompaniment when rain began to fall. When he opened the oven, the Champagne-like smell of yeast and caramelized butter permeated the room, so thick you could feel it on your skin. The sweet smell stuck in your hair for days.

"Can we cut it?" she asked every time a loaf came out.

When they finally cut into a loaf, Frank had a method. He slathered it with butter. Then he coated the butter with a layer of sugar. Then he poured a small amount of boiling water over it, just slowly enough to melt the sugar and butter into the bread.

This is what my mother recalls in her daydreams, sleep dreams, and whenever she still tells this story.

Frank would sit down next to her and for the rest of the day, she was allowed to eat as many pieces as she wanted while they listened to the fire—and the rain, if it was raining—and read the newspaper together.

In the early '50s, Club 57 was the thingin Gary, Indiana. This was when being a bartender was a very real job, and Frank was the best one in town. Everyone came in Fridays at 3 p.m.; that's when Frank's shift started. My mom went there, too. After school she'd climb the staircase up to the second floor over the dime store. Short tables zigzagged across the open room. At the far end of the room was a stage, where at that hour a band would be setting up.

Frank would make my mom a grenadine "cocktail" with a cherry, and she'd sit at the bar. Frank would put a bowl of beef and noodles in front of her, and she'd devour it.

Food was love for Frank, too. My mom typically wore penny loafers from the year before that made her toes curl toward the balls of her feet. As he filled her bowl a second time, Frank always reminded her that she was a sweet girl and he loved her.

"Those beef and noodles, though," my mom said, "were the best thing. They really drew a crowd, and soon the place would be full and the band would start playing."

My mom usually fell asleep on a couch backstage and would wake up the next morning at her grandfather's to the smell of caramelized beef. Sleepily, she would wander into the kitchen. She sat down at the same table where she and Frank made their bread together.

"I got you something," Frank told her once.

He began to unwrap what looked like a hunk of meat in butcher paper, tied up pretty with twine. When he turned around, he was holding a shiny new pair of shoes.

My mother gasped. "Those are for me?"

"Yes," he said and slipped them on her feet. She wiggled her toes inside them.

She hugged his waist tight.

He turned the beef over in the pan until each side was equally dark brown and nearly charred at the corners. The meat had been dusted in flour that was now stuck to the bottom of the large Dutch oven, becoming darker and darker. He added butter and onions, sliced thick, and smashed cloves of garlic, still in their husks. Then he covered the meat with water, quickly put on the lid, and placed the pan in the oven.

Frank did everything to its fullest—no shortcuts, no tricks. Frank made everything from scratch, milled flour, churned butter.

Frank created a mound of flour in the center of the table. The white dust spilled out and up into the air. It was beautiful, my mom thought, like a mini avalanche. He formed a well and had my mom crack a dozen eggs into it. Frank made his own crème fraîche by leaving cream in a jar on top of his icebox with a dash of apple cider vinegar. He placed two large spoonfuls in the center of the well.

"Now mix it," he said, and gestured for her to put her hands in and massage the dough. After she made a big rag-like mess, Frank pulled it toward him and began to knead it on the table. He turned it over and over until it was uniform. He poked his finger into it, and it slowly sprung back.

"Perfect," he exclaimed. He wrapped it snug with a kitchen towel and set it in a cool, dark corner on the kitchen counter.

Several hours and many crossword puzzles later, Frank began to roll out the dough with a large rolling pin. He tossed the sheets to my mom. With steady concentration, she cut them the size of chewing gum sticks.

When Frank pulled off the Dutch oven lid, my mom felt what girls at school said they felt about boys they liked: Her stomach felt full of butterflies, and her heart felt like it was beating all the way up into her throat. The beef was brown and juicy; the muscle pieces began to splinter away, held by a web of milky white fat. Frank explained that you should always cook with beef that has a good amount of fat between its muscles, and cook it until it falls apart—but not too long. Just until it's perfect.

He pulled the meat from the pan, into which he added more water, some bay leaves, and a splash of red wine. With two forks he gently broke the meat into pieces.

As the pan's contents came back to a boil, he showed my mom how to cook the noodles, right in the same pan. The flour from the noodles thickened the pan drippings, water, and wine into a gravy. Once the noodles were floating in the gurgling gravy mess, Frank added the meat back in and stirred. He used a big wooden ladle to heap the contents into a china bowl and placed the dish before her.

Reprinted with permission from Burn the Place by Iliana Regan, Agate Midway, July 2019.

Get the Braised Beef and Handmade Noodles recipe here. 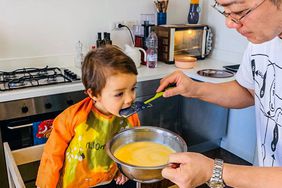