The Cosmo and the Appletini are back in style, but with modern-day twists.

Ask any bartender, and they'll tell you: The espresso martini, that buzz-worthy drink from the 1990s, is back with a caffeinated vengeance. "It has taken over everywhere," says Lynette Marrero, head of education for the mixology conference Bar Convent and founder of all-female bartending competition Speed Rack. She chalks it up to the easing of the pandemic. "It's like, 'We're out again, so let's stay up and do this,'" she says.

But that's not the only '90s jolt to the cocktail world nowadays. All sorts of flavored martinis are back, including the Cosmopolitan, that pink vodka drink popularized by Carrie Bradshaw and and her pals on that Clinton-era television phenomenon, Sex and the City. Also resurrected: Harvey Wallbangers, Midori Sours, and frozen daiquiris. What gives? The pros say it's about a return to fun. Apparently, we're partying like it's 1999 again.

"For a long while, bartenders were much more into Old Fashioneds or Manhattans, and bars took themselves very seriously," says Adam Montgomerie, bar manager at the New York outpost of London-based steakhouse Hawksmoor. "But there's more of a playful edge now. Something like a martini can be tongue-in-cheek."

While mixologists are happy to indulge us, they've also learned a lot in 25 years. Like the gals on Sex and the City's recent reboot, And Just Like That, the Cosmopolitan has matured. "Cocktails come in cycles. Right now we're seeing '90s fashion and a nostalgia for rediscovering these drinks," says Marrero, "but from bartenders with a better arsenal of ingredients."

The ideas behind '90s drinks were always solid, but their composition and balance has evolved. Real citrus has replaced sour mix, fresh juice has trumped canned, and synthetic liqueurs and bar-rail booze have been swapped for craft bottles. "I started bartending in 1998," says Montgomerie, "and it feels like night and day. Drinks then were cloying. Now you get a reasonably made, well-balanced cocktail."

His riff on the appletini is like the love child between the up-drink of the 1990s and the booze-forward cocktail it derives from. "The idea was to do a more modern, more elegant version," he says. "The eau de vies are very good quality. There is no citrus: The malic acid gives you that fresh, bright green apple bite but keeps things clean. And the drink itself is clear, which is a nice surprise. It looks like a classic martini."

It helps, Marrero agrees, to think about "the DNA" of the drink before you update it. The Cosmopolitan is really just a vodka margarita with a splash of cranberry, she points out. And it's easy to jazz up a margarita. "The best way is to look at the flavor profile," and mirror it with "elevated products." Citrus vodkas are made with real fruit infusions now, and the pomegranate juice she trades for the cranberry in her Cosmo Nouveau adds complexity and body to the drink. "It has a nice tanginess that works well with the liqueur and lime."

A good, hard shake incorporates the ingredients and brings on a bracing chill. "It should be very alive, cold, and crisp"— the kind of cocktail you'll order in a '90s-style round for your besties. "We're trying to bring the fun back into mixology," says Marrero. "We can still have quality drinks, but not be so pretentious about it."

The Cosmopolitan is really just a vodka margarita with a splash of cranberry, notes Lynnette Marrero, head of education for the mixology conference Bar Convent. She uses that understanding of the DNA of the drink to create a light and refreshing citrus-forward Cosmopolitan that gets its sweetness from orange liqueur and pleasant tartness and color from a blend of lime and pomegranate juices. To further elevate the drink, she looks for special ingredients, using a citrus vodka infused with real fruit, and pomegranate juice (which she trades for the cranberry) to add complexity and body to the drink.

Fruity and citrusy, Toby Cecchini's "froze-mopolitan" (a portmanteau of "Frozen" and "Cosmopolitan'') tastes so much like a delicious fruit punch that you might not notice there's alcohol in it. Serving the drink in well-chilled glasses straight from the freezer helps it stay frozen a little longer. If not serving right away, cover the blender and freeze, stirring the drink occasionally, for up to 30 minutes.

The Hawksmoor Apple Martini is like the love child between the sweet appletini of the 1990s and the booze-forward dry martini that sweet-up drink derived from. In place of apple liqueur and sour mix, this recipe calls for the highest quality eau-de-vie — a clear fruit brandy — and a splash of homemade malic acid eau-de-vie that delivers a crisp apple finish. Malic acid is an organic acid found in fruit that is often used as an additive in beverages and desserts to give a richer aroma and clean acidic flavor. 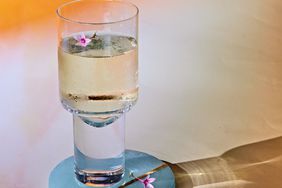 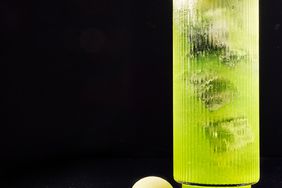