From picking the freshest fruits to pickling, pro bartenders weigh in on how to whip up the fanciest touches.

Over the last decade, at various events in California wine country, I'd begun running into Scott Beattie, the beverage director at Barndiva in Healdsburg and partner at Goose & Gander in St. Helena, California, where he first began producing large batches of impressively balanced cocktails.

Beattie, the author of "Artisanal Cocktails: Drinks Inspired by the Seasons from the Bar at Cyrus," was once the cocktail guru at Cyrus, the Michelin-starred restaurant in Healdsburg that shuttered in 2012, but is reopening in Geyserville this year. Not only is Beattie widely known for crafting exceptionally balanced drinks, but his garnish creations were — and still are — in a class all their own: a word branded into an orange peel; stunning spring flours; or pea shoots and herbs shooting out of the glass, but never haphazardly inserted. Always precise and with intention.

Beattie and scores of bartenders believe that the garnish is not an afterthought. That it should enhance or directly complement an aspect of any drink. "Garnishes should be cut or prepared fresh daily," he says, "[they should] be in pristine condition when introduced to a particular cocktail."

In addition to advice from Beattie, I spoke with six bartenders who offer their take on improving your garnish game at home.

To Garnish, or Not to Garnish

Erick Castro, co-owner of Raised by Wolves in La Jolla, Polite Provisions in San Diego, and host of the "Bartender at Large" podcast, says that what you're looking for in a garnish is an echo — something that magnifies what is going on in the glass. Cappy Sorentino, beverage director for Brewsters in Petaluma, notes that a garnish adds aroma, color, texture, and, "a wow factor." That wow-factor could be simple like a piece of dehydrated fruit, a citrus peel, or a stencil spray.

Maria Camarena, beverage and operations director at Pico in Los Alamos believes the garnish is like adding finishing salt to a dish. For her Gran Torino cocktail (mezcal, Cocchi vermouth di torino, and sfumato amaro), she adds a cinnamon stick and torches the end of it, giving the visual of a smoking cigar. "Aromatically, the smoke from the cinnamon sticks mellows out the smokiness of the mezcal, and the cinnamon itself complements the Sfumato," she adds.

Nicholas Bennett, beverage director at Union Square Hospitality Group's Porchlight, warns the at-home bartender to consider how the garnish will impact the drink's taste to the last drop. "Too much pith on a citrus twist can impart a bitter taste if it sits too long; a jalapeño might make the finish too spicy; an oversized leaf might just be in the way at the last sip."

Chris Longoria, founding partner of West Bev Consulting, says that the garnish for his creations is a preview and complement to the taste and texture of the cocktail it adorns. "Color plays a major role for me, so I sometimes like to use an ingredient that makes the collective colors pop in unison," he says.

For textural appeal, consider rims, which also count as garnishes. "I like the feeling of a nice crunchy, colorful salt, sugar, or spice," says Longoria. Sorentino describes recently adding dehydrated pineapples and cinnamon dusting for visual appeal on a whiskey sour variation.

"Subtlety is key for me," says Longoria, "I've seen some pretty elaborate, beautiful garnishes, yet when I go to sip the cocktail, I get stuff in my eyes and nose, and it really loses its appeal right there for me."

For most garnishes, you need a clean cutting board, a very sharp paring knife, and an excellent fruit peeler — the Y-shaped peelers are ideal for creating twists. You can get creative with torches, stencils, and dehydrators as well.

Practically speaking, Beattie prefers to use firmer citruses for zesting, and juicier fruits with thinner skins for wedges. "Green herbs such as mint, basil, or tarragon should be a vibrant green, free of any brownish deterioration, and not limp in any way," he adds. Meanwhile, pickling helps to preserve produce while providing a tasty bite in the drink. "Fresh citrus and cucumber wheels should be cut daily," says Beattie, who cautions that herbs and flowers must also be re-cut and placed into new water each day.

"Not adding a garnish to a cocktail is like building a house without a ceiling," says Eloy Pacheco, head bartender at Dante in New York City. "Remember to put as much care into your garnishes as you do the liquid of the cocktail. Have fun and get creative. For instance, next time you salt a rim, zest some citrus in the salt for an added layer." 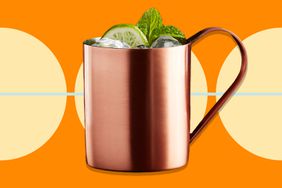