From apricot-brandy casks to ex-Pinot Noir barrels, these uniquely finished Irish Whiskeys are perfect for Saint Patrick's Day and beyond.

Irish whiskey has always been a popular option for fans of brown spirits, but recently, it seems, the range of deeply exciting options has increased exponentially. Producers all over Ireland are not just experimenting with the spirit itself, but also with the ways in which barrel finishes can affect the final dram.

The following 11 Irish whiskeys run the gamut from widely available expressions to smaller-production standouts that are well worth the effort to acquire. All of them, however, share one very important thing in common: They're definitely not just meant to be enjoyed around Saint Patrick's Day, but throughout the entire year. They're that good.

After spending at least 14 years in ex-Bourbon barrels, this beautiful whiskey is then aged another two years (minimum) in ex-Oloroso Sherry casks. The upfront nuttiness here is powerful and assertive, yet as the finish rolls on, notes of honey-coated cacao nibs, coffee beans, and apricot pits come to the fore as well. Toasty hints of graham crackers provide a final flourish for this elegant dram.

Blended from single grain and single malt whiskeys that were then brought together in casks that previously held XO Cognac, this is almost overwhelmingly beautiful on the nose, with chocolate-enrobed caramel, sachertorte, and heather aromas that tee up rich, generous flavors of chocolate ganache, carob, woodsy spices, cinnamon-vanilla pot de crème, candied oranges, almonds, and candied ginger. Their 17 Year Old Legacy Reserve, which was aged in ex-bourbon casks and finished in casks that previously held Cadillac sweet wine, is another stunner, overflowing with sweet spice, nectarines, perfectly ripe apricots, and a finish that sings an aria of mashed yellow apples, lemon blossoms, and citrus oils.

Finished in Mizunara, the famous—and famously rare and expensive—Japanese oak (Quercus cruspula, for you Latin binomial fans out there), this is a fascinating whiskey, oozing with aromas of syrup-coated pancakes, Honey Smacks cereal, and biscuits before a palate of lemon-blossom honey and maple-drizzled biscuits. The finish fans out with chocolate, cafe mocha, incense, sandalwood, and hints of darkly toasted shredded coconut.

J.J. Corry became Ireland's first modern-era "whiskey bonder" in 2015, meaning they purchase unaged and aged spirit from distilleries around Ireland and then blend and finish them at their home base on the McGuane Farm in County Clare. This one, a blend of malt and grain whiskeys that have been finished in ex-sherry and ex-bourbon casks, is biscuit-y and kissed with spice, and finishes with a lovely note of peppercorn spice dusting dried golden raisins, lemon gels, and caramel.

This highly successful "experiment" is redolent with cherries and red berries, a subtle tug of honey cap mushrooms, heather, and flowers. It manages to channel the depth and elegance of red Burgundy while still maintaining its own sense of self. And the Basque Txakolina Acacia Finish is sweet and subtly herbal, with a touch of white licorice and lemon pith, as well as autumn orchard fruit through the long finish. Look for their range of experimental series expressions, which are fantastic ways to experience great whiskey and how unique barrel finishes (virgin Hungarian oak, Jamaican dark rum, tequila, and more) impact them.

This small-batch gem, finished in ex-PX sherry and bourbon barrels, dances between counterpoints of sweet dried fruit, brown butter, and earthier aromas, all of which lead to a palate of leather, salted caramel, dehydrated apples, and cacao beans, as well as almond shortbread and cooked brown sugar. Long, complex, and generous.

This triple casked Irish Whiskey brings together grain and malt whiskeys that have been aged in seasoned oak, virgin oak, and ex-Sherry casks, and every sniff and sip drips with caramelized sugar, toasty vanilla, and bananas, as well as sweet-spice-dusted dried apricots, flan, and banana-studded pastry crème.

This gulpable whiskey is crafted from a blend of single grain, single malt, and single pot still whiskeys that have matured in a combination of ex-Sherry, ex-Bourbon, and ex-Marsala casks from Cantine Florio, lending it hints of coffee fudge, cinnamon, dried fruit, and chocolate.

A savory, almost leather-like nose is sweetened up with nougat and milk chocolate before sweet-spiced flavors of caramel, nougat, chocolate, mashed Amarena cherries, and sweet cigar tobacco, all joined by grilled stone fruit and honey. Their Sherry Cask and Port Cask finishes are also notably delicious.

I've been impressed with the work of Two Stacks, and this expression is further reason for that: The finishing in ex-apricot-brandy French oak casks has lent this whiskey notes of grilled apricots and peaches spread with almond butter, cooked honey, brown butter, and sweet spice. It's bottled at a powerful 127 proof, but it wears that high alcohol with real grace: This is a fantastic and surprising Irish whiskey.

Not so much finished in a separate barrel as blended together, this delicious dram is the result of mingling single malt and single pot still Irish whiskeys that have been aged in both ex-Bourbon and ex-Cognac casks. The result is silky and sweet, with notes of honeysuckle and sweet brown spice, coconut and sultanas, a touch of pear fritters, and a finish that is drizzled with caramel and a hint of tropical fruit. 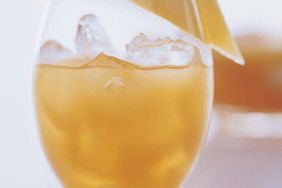