Marc Farrell Wants to Change the Way You Think About Rum

"A lot of people in the U.S. think of rum as this lower-end spirit tied to the sugary spring-break cocktails they had in Cancún or Jamaica. But rum can be so much more inspired and authentic than that."

Thanks to a rum resurgence in the past few years, more and more distilleries have been making premium rums and trying to change the preconceptions people have about this historic spirit—proving, for instance, that a rare, pricey 21-year-old bottle shouldn't be limited to the realms of single-malt Scotch or bourbon. But the Black-owned Ten To One rum brand has an even bigger goal in mind: Its founder, Marc Farrell, wants to introduce the Caribbean's history, heritage, and culture into people's understanding of rum.

Before becoming a rum-maker, Farrell worked his way up the corporate ladder. Born and raised in Trinidad and Tobago, he attended MIT at age 16, followed by the University of Cambridge and Harvard Business School. After working in the financial industry, he was recruited by Starbucks after a chance meeting with Howard Schultz. By age 33, he was the youngest vice president in the company's history.

Eventually, though, Farrell turned his attention to rum. He'd noticed how the spirit's portrayal in the U.S. was entirely different from his experience in the Caribbean culture he'd grown up with. The tired marketing tropes popular in the States—British Navy references and pirates and plantations—inspired him to reframe the story of rum through the lens of his Caribbean heritage, leading to his founding of Ten To One in 2018.

"As somebody who's lived in the U.S. for 20 years, I find the narrative around rum is so narrow, so limited, and so full of caricature," Farrell says. "A lot of people in the U.S. think of rum as this lower-end spirit tied to the sugary spring-break cocktails they had in Cancún or Jamaica. But rum can be so much more inspired and authentic than that."

Every element of Ten To One serves Farrell's mission. The logo uses the scarlet ibis, Trinidad's national bird. The imagery on the side of the bottle borrows from old shipping labels, from the days when sugar would travel from theCaribbean to Europe. And Ten To One's name was inspired by the origin of the West Indies Federation, which consisted of 10 countries. "The idea of 10 becoming one came from Trinidad's first prime minister, Dr. Eric Williams, who said, 'One from 10 equals zero,'" Farrell explains. "He meant that if you remove one country from the collective, the whole thing falls apart. Ten To One is a brand that's grounded in the idea of community. We're stronger together than we are apart."

Ten To One is not just the story of a Trinidadian creating a Trinidadian rum, though. Farrell specifically wants to tell a pan-Caribbean story, celebrating different distillation methods, different terroirs, and different profiles in a single bottle. The Ten To One Dark Rum ($45) blends bourbon-barrel-aged Barbadian, Dominican, Jamaican, and Trinidadian rums, with no added color, flavoring, or sugar. (Many rums are intentionally slightly sweet, thanks to sugar that's added during the distilling process.) And Ten To One's White Rum ($32) is not just the white version of the dark; it's a blend of Jamaican pot-still rum and Dominican column-still rum, with zesty flavor, jasmine and honeysuckle notes, and a smooth finish. Farrell's latest creation, the Ten To One Reserve Rum ($150), sold out almost instantly.

Through the lens of Ten To One, Farrell is slowly working on rum reimagined, where the storytelling goes beyond the rum. To change minds and palates, after the company's initial launch, Farrell and his team started educating drinkers with tastings and events, trying to introduce the brand and Caribbean culture directly. Then, when COVID-19 shut down the world, his education efforts moved to the virtual world, with Instagram Live events and virtual cocktail classes conducted by social media personalities and bartenders. He also created the Lime Line, a text hotline through which rum connoisseurs can get cock- tail tips, advice, or recipes. He hopes one day people will drink rum as a way of celebrating Caribbean culture—with his company being the one that chases away those reductive, clichéd rum images for good. "I want to take everything that people think about rum and turn it on its head," he says. "We want to challenge expectations and change the way people taste, experience, and talk about rum. Five years from now, I would love for people to see our bottle out in the world and be like, 'Hey, these are the guys who completely changed how we talk about rum!'"

Caramel and butterscotch from dark rum shine when paired with the soft herbal notes of Averna Amaro Siciliano, which is sweeter than typical amaro.

Homemade coconut-mint syrup lends cool, quenching freshness to this lime-kissed mojito. Blanching and shocking the mint leaves before infusing them into the syrup preserves their bright color. 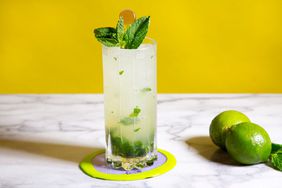 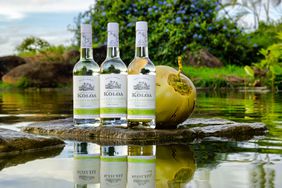