Regarding Milk & Honey House Rules (or, the Sasha Petraske Finishing School for Patrons)

This week, Phaidon published Sasha Petraske’s Regarding Cocktails, a brilliant, bittersweet drink manual from the late creator of this century’s most influential drinking dens. In this excerpt, his widow pays tribute to Milk & Honey’s iconic 8-point code for patrons.

1. No name-dropping, no star f*cking.

2. No hooting, hollering, shouting, or other loud behavior.

4. Gentlemen will remove their hats. Hooks are provided.

5. Gentlemen will not introduce themselves to ladies. Ladies, feel free to start a conversation or ask the bartender to introduce you. If a man you don't know speaks to you, please lift your chin slightly and ignore him.

6. Do not linger outside the front door.

7. Do not bring anyone unless you would leave that person alone in your home. You are responsible for the behavior of your guests.

8. Exit the bar briskly and silently. People are trying to sleep across the street. Please make all your travel plans and say all farewells before leaving the bar.

The legendary house rules of Milk & Honey were more than an etiquette guide for bar decorum. They could be read as a compass for consideration of others and self-governing, drawing comparison to the Rules of Civility & Decent Behavior in Company and Conversation, the set of sixteenth century precepts that guided a young George Washington as a schoolboy. Though Sasha’s beliefs were not from another age—graciousness, modesty, and decorum ought to be common conventions of society no matter the time. The modern cocktail bar had to be in an atrocious state when derricks were hooting, hollering, play fighting, name-dropping, and entertaining company who ran any risk of swinging from the rafters after two drinks. We can castigate, ad nauseam, the cloying cocktails and the manner in which they were served in the crepuscular days before Milk & Honey. So many of us sailing three sheets to the wind on rudderless ships navigated by misguided captains. Stormy weather, indeed.

The house rules were cast in bronze plaques on the bathroom doors of each of my husband’s bars— a gentle decree from a patient chief whose sole intention was to be a good neighbor, both to those living in the building at 134 and elsewhere on Eldridge Street. The plaques were frequently stolen, as compelling a novelty as any to a thief—a coveted conversation piece for the home bar. But why? Was there any irony in a request that all business be concluded before exiting? Was it at all out of line for the host to ask that conversations not focus on the famous or infamous who might be within the room? Was the precept that gentlemen conduct themselves as such really a demand so great?

The fifty-sixth maxim contained within the Rules of Civility states “For ‘tis better to be alone than in bad company.” Circa 2000, ladies knew that a few quiet drinks spared from the company of cads and clumsy introductions were a rare commodity at any cocktail bar. In point of fact, when I read the house rule encouraging ladies to shun unwelcome advances with a slight lift of chin and volumes of silence, I made frequent dates with thick books to Milk & Honey, so frequent that Richie Boccato created a signature drink for me, the Water Lily. The reverence and hum of the Eldridge Street bar was a sanctuary of seated patrons who were required to telephone before dropping in. It was a dim den where hats were hung reverently from hooks provided. And then there were the cocktails that were served on candlelit silver trays or respectfully slid toward patrons by bartenders bound by another code of rules.

Excerpted from Regarding Cocktails by Sasha Petraske with Georgette Moger-Petraske, Phaidon 2016 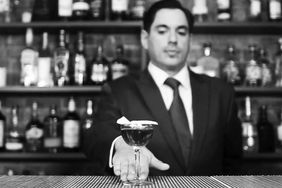