'Untitled' by Joel Stein is a celebrity spirit for the non-celebrities among us.

Joel Stein wrote a weekly column for Time magazine for 20 years, along with 22 cover stories; he was a weekly columnist for Entertainment Weekly and the Los Angeles Times. He is the author of the books Man Made: A Stupid Quest for Masculinity and In Defense of Elitism: Why I'm Better Than You and You're Better Than Someone Who Didn't Buy This Book.

Experience: Joel Stein was not easy to work with on this bio. The only facts he provided that were verifiable were that he wrote a weekly column for Time magazine for 20 years, along with 22 cover stories; that he was a columnist for Entertainment Weekly and the Los Angeles Times; that he is the author of the aforementioned books; that he has taught at Princeton and written for several sitcoms; and that and has written for The New York Times, Bloomberg Businessweek, The Washington Post, the Financial Times magazine, the New Yorker, Esquire, Vanity Fair, GQ, Food & Wine, and Town and Country. There is no factual basis for his claim that his writing has "saved millions of lives and destroyed many more marriages."

The advantage to occupying the very lowest rung of celebrity is getting to ascend a well-tested ladder. So now that every famous person has launched a celebrity spirit — from George Clooney's Casamigos tequila, which sold for $700 million, to UFC President Dana White's banana-flavored whiskey, Howler Head — the systems were all in place for me to create my own.

Still, I wasn't sure the market was fully saturated enough for me to wade into. So I asked brand developer Steve Luttmann how famous a person needs to be to launch a brand. A million followers on social media as a baseline, he said, but there were work-arounds. For instance, he launched Hercules Mulligan, a rum-and-rye blend named after a war hero who has no social media presence because he died almost 200 years ago. Steve also launched Bahnbrëcker whiskey with country singer Randy Rogers, who isn't a national star. "He has a very loyal following. He just needs to reach his most enthusiastic 1% to spread the word. The Rock, on the other hand, is like broadcast television. In a week, everyone knows about Teremana."

Eventually, Steve agreed to partner with me. "It's such an [unbelievable] idea to launch a celebrity spirit as a writer that it could actually take off because people think it's so [absurd]," he said. I was glad I had accomplished my first goal of making my business guy comfortable enough to make fun of his celebrity partner.

The next step was choosing a spirit. We started with tequila, one of the hottest-selling beverages, but couldn't find a way around the problem that I find it disgusting. I like aged rum, but Steve told me that rum doesn't sell. That's when we came up with rum-flavored tequila. Steve then brought in Lynn Haviland, a brand strategist and naming specialist, and designer Shaun O'Rourke. "With influencers, the bar for what 'celebrity' means has changed," Shaun said, proving I'd also made him feel comfortable.

As she had with other celebrities, Lynn conducted a stakeholder interview with me. "Why tequila?" she asked, so I told her about working on Lifetime's American Princess, where my coworkers bullied me into joining their Tequila Thursdays. When we finished, I asked her how I'd done. "It's not a test," she said in a tone that I do not believe anyone used with Ryan Reynolds after his stakeholder interview about Aviation Gin.

Steve gave me a recipe for spiced rum (a cold infusion of cinnamon, vanilla, orange peel, nutmeg, cloves, allspice, star anise, and peppercorns) and told me to try it on mezcal. He figured the smokiness of the liquor would match with the mulling spices. Plus, mezcal was a faster-growing, cooler category.

Two days later, I brought my home-infused booze to a dinner party where two guests were professional chefs. Both suggested I ditch the cinnamon, which they found overwhelming, and that I up the orange, which worked well with the smokiness of the mezcal. But they liked it. Even more surprisingly, I liked it.

In the 1980s, my father worked in marketing for a huge liquor importer, so I called him for advice. He stressed that I needed a "bar call," a simple cocktail made with my brand, "the way Smirnoff had the Moscow Mule," he said. "They went into trendy bars and had all these Moscow Mule girls with Russian outfits promoting it." While I didn't think that would work today for several reasons, the general rule seemed sound. So I called the bartender Ivy Mix, co-owner of Brooklyn's Leyenda and author of Spirits of Latin America. Ivy had some concerns. "I think the celebrity agave spirit thing is a real shame. These celebs have made tequila and mezcal status symbols and have taken away from the importance of the history and the people who make these items," she said. Sure, I agreed. But would my status symbol taste good? "Agave distillates have long histories with infusions, and they do tend to be delish," she admitted.

A couple of weeks later, Lynn presented the team with a 30-page branding deck and sent us off to come up with at least 10 potential names. Our consensus winner was "Untitled by Joel Stein." Next, we looked at designs. On this, the team vote went to one where the back of the bottle has my silhouette, which you can see through the bottle. The slogan was a play on words mocking my lack of prestige: "For the untitled class."

Since the team was now talking about crowdfunding a launch of Untitled by Joel Stein, I asked a fellow celebrity for tips. Bryan Cranston, who created Dos Hombres mezcal with his Breaking Bad costar Aaron Paul, told me that he, too, had once disliked mezcal. But Paul took him to a mezcal bar and changed his mind. My feeling was that while that was a powerful brand story, it was no "being bullied by Lifetime writers."

Cranston also told me that I had to love my brand because making a celebrity spirit is a lot of work. "If you do anything that you're not passionately involved in, it's a job. I don't want a job, but I like to work at things I'm passionate about," he said. "When I have a meeting for Dos Hombres, it's like, 'Ooh! Yes! We're going to think of an activation! We're entering three more states! Fantastic!'"

I was starting to fear this might be true because Steve put me in touch with John Sean Fagan, who could produce my mezcal in Oaxaca, Mexico. He thought my infusion sounded good: "It's like having a little mezcal with your breakfast, with an orange and a little bacon. That's the way I start my day if I don't have anything to do." Apparently Untitled by Joel Stein casts a wide net.

Fagan explained that I'd have to come down for a few days every two months for a while, checking the taste and meeting the people making it. "You're the guy who's going to be running operations," he told me. He'd recently had a celebrity bail on their spirit when they realized how much time it would take up. I was going to have to commit. "If you use Ryan Reynolds as a paradigm, no one is going to outwork Ryan Reynolds." 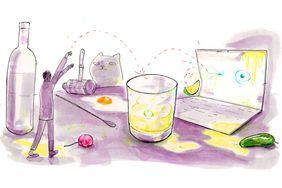