3 Hot Ginger Drinks for When It's Gross Outside

When you want to stay in the house for many hours, there's nothing like a warm cocktail with fresh ginger.

We have no objection to drinking classic cocktails all winter long; a martini or Manhattan never goes out of season. And a stiff hot toddy can be the perfect nightcap on a snowy evening. But a little variety never hurt anyone, right?

This winter, we’ve been reaching for one ingredient again and again: fresh ginger. Sharp and spicy, it’s full of personality and translates especially well to warm cocktails.

We’ve been making a great non-alcoholic nightcap with ginger—just boiling water with a bunch of sliced-up fresh ginger and then stirring in honey. Maybe a little lemon. Adding cinnamon is delicious, too. (And makes your kitchen smell amazing.) And adding booze? Well, that’s just what we tend to do. Here are three hot ginger cocktails that’ll see you through the season.

Adding bourbon to a hot cocktail is a no-brainer; it just works. Fresh ginger bubbling away in hot water gives you a great base for a powerfully flavored cocktail; honey adds depth and sweetness, bitters add a warm spice. There’s a lot happening even without the spirit—really, the whiskey is just the finishing touch.

Instructions: In a medium-sized pot, bring 2 cups of water to a boil over high heat. Add 60 grams of ginger, about a 2” by 1” chunk, peeled and cut into thin slices. Lower heat and let simmer for ten minutes. Carefully strain out ginger, reserving liquid. That’s your ginger tea.

For each drink, combine 2 ounces ginger tea, an ounce of bourbon, half an ounce of honey, and a dash of Angostura bitters in a heat-safe glass. Garnish with a lemon peel. (We like ours long and thick.)

It’s a little less common to see tequila in a hot drink. But we love the pairing of cinnamon and tequila, and the spirit helps to bring out ginger’s sharp bite. Smells incredible as it’s simmering on the stove; and it’s easy to make for a crowd, too.

Instructions: In a medium-sized pot, bring 2 cups of water to a boil over high heat. Add 60 grams of ginger—about a 2” by 1” chunk, peeled and cut into thin slices, along with a long cinnamon stick (around 4”). Lower heat and let simmer for ten minutes. Carefully strain out ginger and cinnamon, reserving liquid. That’s your ginger-cinnamon tea.

For each drink, combine 2 ounces ginger-cinnamon tea, an ounce and a half of reposado tequila, half an ounce of agave syrup (that’s agave nectar cut 1:1 with hot water), and a dash of Angostura bitters in a heat-safe glass. Garnish with a long cinnamon stick or two, and an orange peel studded with cloves.

We’re not making a ginger tea of sorts here; rather, a toddy-style cocktail with plenty of ginger flavor. We’re first muddling ginger in a heat-safe glass, building a toddy atop it, and then garnishing with even more of the fresh root, making this cocktail as fragrant as it is satisfying.

Instructions: In the bottom of a heat-safe glass, muddle 5 grams of peeled ginger (about a quarter-sized piece, ¼” thick). Add two ounces of dark rum, half an ounce of raw sugar syrup (that’s Sugar in the Raw or similar, cut 1:1 with hot water and stirred until dissolved), a dash of Angostura bitters, and two ounces of water just off the boil. Stir briefly and garnish with slices of ginger—the bigger the better. 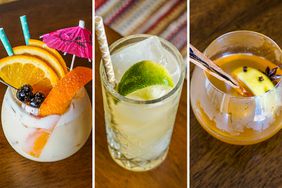 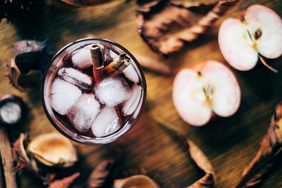 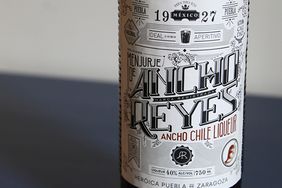