And how they pulled from their roots for inspiration.

Walking around London on a gin tour with Jared Brown is the spirits equivalent of sauntering through Memphis with Elvis Presley: His contributions to both London dry gin and to the world of spirits is impossible to overstate. My redeye from Philly had landed only a few hours earlier, and this was the definition of hitting the ground running. Brown, after all, is one of the most respected figures in the world of spirits: A consultant, publisher, and co-founder and master distiller of Sipsmith Gin.

It's telling, after all, that when Fairfax Hall and Sam Galsworthy were in need of a founding distiller — and, as the story goes, still trying to pinpoint exactly what sort of gin they'd ultimately be producing — they brought Brown on to steer the proverbial ship. (Amazingly, the three first met at a Negroni party, at Beefeater's distillery, no less, which to me seems like a pretty obvious sign from the universe that the partnership was pre-ordained.)

He decided to steer the new company back to the style's origins in the best possible sense.

In addition to his other work, Brown is a cocktail and spirit historian, and after having discovered several old recipes for London dry gin during his many forays into the often-murky past, and then several trial runs, Brown insisted on crafting something of an homage to the original London dry gin for the upstart company, albeit with more modern ingredients and techniques.

It took several years and a change in the law — an English gin-distilling license hadn't been issued in over two centuries; the previous one was in 1820 — but Sipsmith was finally able to fire up their first still, named Prudence, in 2009. Since then, they've not only expanded their own portfolio of gins, but the juniper-scented floodgates have opened within the city. They were, less than 15 years ago, one of only two licensed gin distilleries in London (the other was Beefeater); there are now dozens. And drinking gin cocktails around town last week showed in the most delicious way imaginable that it's been a case of the rising tide lifting all ships.

I found the gin-cocktail culture to be as vibrant and forward-thinking as any I've experienced around the world in recent years, albeit often with a deep respect for the past: the balance between tradition and progress, it seems, is electrifying the London cocktail culture in particularly exuberant ways.

Gin and Tonics, for example, are everywhere in London, and given the time of year, I was initially nervous — as I always tend to be — when I saw the focus on incorporating seasonal fruit into them. Fruit-sweetened Gin and Tonics, when they go wrong, tend to come off as cloying, especially when the gin itself utilizes some marquis fruit or another in its production. Fortunately, the majority that I tasted managed to not only avoid this potential pitfall, but to force me to reconsider my almost Pavlovian fear response when I see them on menus.

Wimbledon was a perfect example. In addition to a gorgeous range of foods on offer throughout the expansive grounds — keep an eye on Food & Wine's Instagram account for more on that in the coming weeks — the cocktails there were fantastic. The tournament's namesake cocktail, The Wimbledon Gin & Tonic, brought together Sipsmith Strawberry Smash Gin with Fever-Tree Tonic and a slice of local strawberry. It was not just a balanced, refreshing, and unexpectedly complex cocktail in its own right, it was also a fantastic partner for the event's famous strawberries and cream.

At The Cadogan Arms, an upscale pub on King's Road in Chelsea, The Wimbledon Cup plays with the idea of incorporating fruit into a fizzy gin cocktail in equally successful ways, even if it's not technically a Gin and Tonic. Here, bright hits of mint and citrus lift cucumber seltzer in dangerously drinkable ways. It reminded me of some sort of cousin to a classic Pimm's Cup, but more subtle and less sweet.

Negronis are also being riffed on throughout London. The Bar with Shapes for a Name served one seamed with notes of coconut, and Chameleon showcased a Negroni riff zipped with fig. Intriguing additions to Negronis are nothing new, but the judiciousness with which these were incorporated, and the thought that went into the other components, was notable. The coconut oil at the former, for example, was a terrific counterpoint to Punt e Mes, and the fig in the latter dovetailed seamlessly with the Monkey 47 gin.

Even cocktails that are so integral a part of the canon that their familiarity risks rendering them unexciting are being shown new life. This reaches its apex at The Connaught with their Martinis, of course, but also less famously with their take on a Vesper, the Number 11. They start with a base of Connaught Bar Gin and Grey Goose vodka that they then mix with oil from Amalfi lemons, Martini Ambrato, and white wine from the southern French producer Château La Coste before anointing it all with each of their five house bitters, including tonka bean, lavender, cardamom, ginseng and bergamot, and coriander seed. It isn't exactly a Vesper, but with each passing sip, the cocktail seemed to be an evolution of one. In that regard, it embodied so much of what's happening with the world of gin cocktails in London right now: It's rooted in the past yet with its eyes firmly set on the future.

I imagine that, nearly a decade and a half ago, it's exactly the turn of events that Brown, Galsworthy, Hall, and the rest of the Sipsmith team might have hoped for, but perhaps wouldn't have necessarily banked on. Yet London has always seemed to find a way to keep chugging ahead while not losing respect for, or touch with, the past. These days, it seems, there's no better way to experience that than with a thoughtful, transporting gin-based cocktail in your glass. 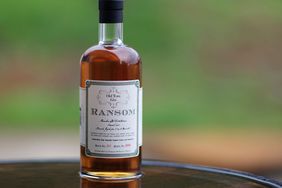