Earlier this year, Queen Elizabeth celebrated her Platinum Jubilee — a milestone marking 70 years of service to the people of the United Kingdom and the Commonwealth.

Earlier this year, we published this piece in celebration of Queen Elizabeth's Platinum Jubilee — a milestone marking 70 years of service to the people of the United Kingdom and the Commonwealth. On September 8, the Royal Family announced the Queen's death, at age 96. Read on for the fascinating history of Queen Elizabeth's storied favorite cocktail, plus a recipe.

As Brits and other devout followers of the British Royal Family ramp up for the culmination of the Queen's Platinum Jubilee celebrations from June 2nd to the 5th, there's no better libation to imbibe than the Queen's storied favorite: a Dubonnet and gin, which is a simple mixture of Dubonnet, a wine-based French aperitif, and gin with a slice of lemon.

It's a cocktail that was in vogue in Britain during the 1920s, and was particularly loved by the Queen Mother, Queen Elizabeth, whose preference for the cocktail naturally influenced Her Majesty's palate. The Queen Mother was not one to shy away from a spirituous delight, and on one occasion even instructed her favorite page, William Tallon (aka "Backstairs Billy''), to take two small bottles of Dubonnet and gin on her behalf for a morning picnic "...in case it is needed."

Queen Elizabeth II has carried on the tradition of drinking her late mother's preferred aperitif, Dubonnet and gin, imbibing the cocktail every day before lunch as appetite-stimulator (although she's had to cut back in recent times so that she could be in top shape for her Platinum Jubilee). But, unlike the Queen Mother who enjoyed a heftier equal parts pour of the cocktail, Her Majesty prefers a 2:1 ratio of Dubonnet to gin, for a lower-alcohol serve.

The aromatic French aperitif — made from a blend of fortified wine infused with herbs and spices, including blackcurrant, black tea varietals, and quinine — has become so significant to the Royal Family that it was awarded a coveted Royal Warrant in 2021. It's a prestigious accolade only presented to people or companies who have regularly supplied goods or services to the Royals. Simon de Beauregard, a director of Pernod Ricard, the parent company of Dubonnet, responded to the news by saying: "We are delighted Her Majesty enjoys our beautiful brand and are humbled to have received a Royal Warrant." Unsurprisingly, the product's sales boomed the week of the announcement jumping by almost 100% year-on-year, causing Waitrose, one of the largest supermarket chains in the U.K, to sell-out temporarily.

As low-ABV cocktails have become fashionable in recent years, Dubonnet has been given a new lease of life due to its quaffability at 14% ABV. It's been the mindful drinking trend that's slowly allowed Dubonnet to separate itself from its reputation of being an aperitif enjoyed strictly by older generations. "Today's resurgence of Dubonnet is well-deserved as it was a popular ingredient in a handful of golden age cocktails," says Tiago Mira, Lounge Bar & Veranda general manager at The Goring Hotel, a property known for accommodating the Royal Family on many occasions given its proximity to Buckingham Palace, and is the only hotel to have been awarded a Royal Warrant for hospitality services in 2013.

The Queen's gin and Dubonnet cocktail has become such an icon that most of London's five-star hotel bars have created their own twists for the Platinum Jubilee inspired by the flavors of Dubonnet. "I created a subtle twist on the gin and Dubonnet called The Coronation Cup as a way to pay homage to the Queen and her favorite cocktail," Mira says. "The combination of London Dry gin, sloe gin, Dubonnet, roses, fruits, and spices respects the heritage of the classic drink, but it's something we consider an elevated gin and Dubonnet to celebrate the occasion."

Other hotels, such as The Beaumont, Mayfair, have also created a special cocktail inspired by the flavors of the berry and botanical-forward Dubonnet, laced with quintessential British ingredients. At the hotel's resident bar, Le Magritte, guests can celebrate the Platinum Jubilee with an effervescent blend of Keepr's English raspberry & honey gin, Chambord liqueur, King's ginger liqueur, rhubarb bitters, Gusbourne blanc de blancs English sparkling, and lemon, with grapefruit juices served in a tulip glass.

While eager cocktail enthusiasts may be tempted by one of these elegant, modern twists on Her Majesty's favorite cocktail, the Queen herself can be expected to honor tradition and stick to her gin and Dubonnet, should she be able to indulge. And if you'd like to drink like royalty, then the Queen's gin and Dubonnet, crafted to her exact specifications, is the ideal way to celebrate this momentous occasion.

Half of a lemon wheel

Directions: Per the instructions of Robert Large, who is the Yeoman of the cellars at Buckingham Palace — the staffer in charge of procuring the spirits, wine, beer, and ale served for regular royal meals and entertaining — the Queen's gin and Dubonnet cocktail should be made as follows:

Pour one part gin and two parts of Dubonnet into a small wine glass, or chalice. Add the half lemon wheel to the mixture, then top with two perfectly proportionate ice cubes, sinking the lemon into the cocktail. (Note: Add more ice at your own discretion.) 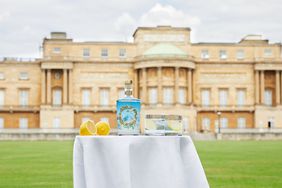 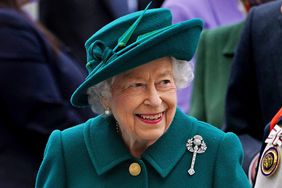 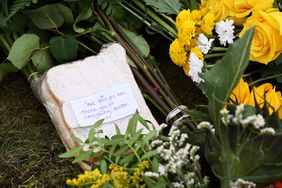 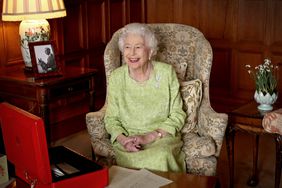