The toque, first popularized in the 19th century, is now a rare sight outside temples of fine dining in France.

Step into New York City's Le Coucou, a 2017 James Beard Award winner for Best New Restaurant, and there are a few atmospheric elements that will strike you: the exposed concrete, the triple-hung glass windows, the pewter-steel chandeliers, and, arguably the most photographed feature, a private bar space with a 13-foot vaulted ceiling and a hand-painted landscape mural. The open kitchen, visible from almost any seat in the dining room, naturally draws the eye next, but not merely because of the impressive set-up. It's the bustling staff sporting high, pleated chef's toques that has some diners doing a double take.

If chef Daniel Rose has revived the toque-wearing tradition in a city that has long bid adieu to formality, it's for a couple key reasons: heritage and hygiene.

"When I was in cooking school in Lyon, we wore toques whenever we were in the kitchen," Rose says. "That was true in most of the kitchens I worked in, and we removed them only at the end of service when we began to clean." If he didn't wear them when he first opened his acclaimed Parisian restaurant Spring, it was because he was alone in both the kitchen and the dining room. "The toque would have created an uncomfortable distance between me and the diner," he says. "It also would have been absurd — imagine dining in a restaurant with a single employee wearing a 10-inch white toque!"

Like many of French cooking's greatest contributions, from the soufflé to the four mother sauces, it was Antonin Carême who popularized the tall, classic white toque in the 19th century by adding stiff cardboard to affix the shape. The purpose was to ensure that hair, sweat, and other undesirable secretion did not mix with the food, and that remains true in most high-end establishments today. (Similarly, long-sleeved jackets, also common in grandes cuisines, were meant to protect the chef from burns.) The hats also symbolized kitchen hierarchy, led initially by who wore the tallest hat: the chef.

For chef Anne-Sophie Pic, enforcing the toque at her Michelin-starred restaurants is independent of ranking; her team knows where they stand regardless of what they're wearing. "I try to shape my chefs by making them more versatile in their work, not by modifying their uniforms," she says. "Paul Bocuse always insisted upon the toques and the tightly shut collar which absorbs sweat, so it's also an homage to him."

In bigger teams, like the one Rose helms at Le Coucou or the one Anne-Sophie Pic manages at Maison Pic, the toques foster team spirit and send the message that the job is taken seriously. Chefs need to dress the part, insists Gérald Passédat, the award-winning chef and owner of Le Petit Nice in Marseille. "There's nothing more French than those uniforms; it's elegant and now it's universal, a sign of rigor," he says. "Frankly, the uniform goes with the job. You don't see pilots wearing shorts, do you?"

But as culinary tastes and expectations have relaxed, the sartorial codes of many restaurants have followed suit. That the toque is a rare sight outside temples of fine dining in France is in large part thanks to the "bistronomy" movement pioneered by Parisian chefs like Yves Camdeborde, Iñaki Aizpitarte, and Gregory Marchand. The economical style has had a radical impact on dining customs over the last decade and not only insofar as the fuss-free twists it offers on the plate. The entire dining experience has veered toward the ultra-casual, from the front-of-house staff who happily show off how good they look in jeans and linen aprons to the kitchen crew whose uniforms have lost a few noticeable layers.

Greater flexibility is a good thing, but chef Sylvestre Wahid, whose Restaurant Sylvestre Wahid holds two Michelin stars, points out that wearing the toque is, nonetheless, non-negotiable in gastronomic restaurants. "It's required that chefs wear some sort of protection for obvious hygienic reasons," he says. The operative phrase here is "some sort of protection," which is why we're seeing bandanas, baseball hats, and other cranial accessories step in as substitutes. In some cases, even tightly pulled-back hair suffices.

At Septime, a restaurant straddling both the worlds of bistronomy and Michelin dining (it has one star), sartorial rigidity is noticeably absent. Asked upon leaving the restaurant whether it surprised her that chef Bertrand Grébaut's team eschewed the custom, one diner replied, "It wouldn't fit the vibe anyway," adding that both the cooking and the environment are anything but stuffy.

"They're becoming a rather outdated accoutrement to the cook's uniform, partly because they are constricting but mostly because toques subscribe to an antiquated culinary world where formality and hierarchy are still the lay of the land," says Lise Kvan, a Paris-based chef and restaurant consultant. "Culinary arts institutions, like Ferrandi, where I studied, include toques in their students' uniforms to encourage conformity and cleanliness, but above all, tradition."

That said, while it may still be standard practice in fine dining restaurants across France, there have been some adjustments: The chef and the sous chef can go toque-less.

"One of the few traditions I don't adhere to is that the chef wears the tallest toque," says Rose. "I have pushed that to its logical end, which is not to wear one at all. I think it helps preserve a very human rapport that is not based on power or hierarchy but on respect and action." 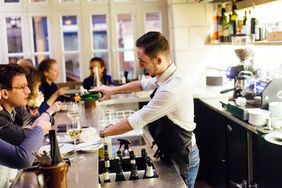