My Notebooks Tell the Story of How I Became a Chef

An award-winning pastry chef traces the arc of her career through her kitchen notebooks.

Lisa Donovan is a James Beard Award-winning writer and chef who has redefined what it means to be a Southern baker as the pastry chef to some of the South's most influential chefs.

Experience: Lisa Donovan has been formative in developing, writing, and establishing a technique-driven, historically rich narrative of traditional Southern pastry in restaurants across the country and in print. She is a regular contributor to Food & Wine and has been a featured speaker at René Redzepi's globally renowned MAD Symposium, discussing the culture and responsibilities of restaurants. Lisa centers her work on advocacy and education. Her recipes and writing have appeared in The New York Times, The Washington Post, Eater, Literary Hub, and Saveur. She is the author of Our Lady of Perpetual Hunger, which earned her a Les Dames d'Escoffier International M.F.K. Fisher Prize in 2021.

At last count, there were 72 notebooks stacked in my attic and storage space., or close at hand in my Nashville kitchen. Scrawled on their pages is the story of how I became a chef. The first time I wrote in one, I was a 20-year-old sophomore in college, six months pregnant with my first child. I lived alone with a cat and had no idea what I was doing, in life or in the kitchen. I got out the notebook, one I’d previously used for sketches and moody poetry, because I needed to remember that I changed Bernard Clayton Jr.’s formula for hot-water pastry. I had decided his was too stodgy, that it needed a little more finesse. Little did I know that dull heft was the entire point of a hot-water pastry dough—I had essentially rewritten it into a basic pâte brisée without even knowing it. It would take me a few more years, and several more notebooks about my strange kitchen and eating habits, to realize that this self-education was the stirring of a career as a pastry chef I did not yet know I was going to have.

Over the next few years, that first notebook became a stack of scratch pads, and the first child was joined by a second as I steeped in the tradition of women who help support their families by baking all night while the babies sleep, selling pies and cakes to neighbors or out of their cars in the parking lot near the center of town. Baking served many roles in my life, but mostly it was a kind of safe place to quiet my head and feed my family during the intense, wonderful, and stressful years of being a young mother. Baking provided order. Baking provided sustenance. Baking reminded me to be generous, even when I felt, some days, like I had nothing left to give. People would order pies for Thanksgiving and Fourth of July, sometimes by the hundreds. I would take a week to prepare ingredients—filling, pie dough by the pounds—and then spend one intense night building and baking, rotating them all in and out of a 1950s oven in a rented apartment kitchen. In the morning I’d load the babies into their car seats and then the pies into the trunk, pop a Bowie CD in the player, and, in an old Volvo that smelled gloriously of butter and chess pie, I’d go collect a month’s rent.

Being self-taught had its rewards. I was engaged in a constant conversation with myself about technique, and I developed a habit of critical thinking that cannot be taught. By the time I stepped into my first professional kitchen five years later (when chef Anne Kostroski, owner of Crumb bakery in Chicago, invited me to be her pastry assistant at the not-yet-opened City House in Nashville), I was sharp and ready, with good routines in my bones.

Routines are important in baking; they help you establish what works and what doesn’t, keeping each action fresh in your mind. Learning technique and allowing it to build into creativity takes practice. Like a very good student (or an eager young cook with a lot to prove to herself, who felt forever behind because she did not go to culinary school), I had written every step down. Nothing was left undocumented so that I could retain details, so I could get better, so I could be good or maybe even, I hoped, great someday.

Yet no matter how comfortable I had been in my baking skills and my ability to learn, before I worked in professional kitchens, I had never plated a dessert, written a menu, or cooked for such a consistently large crowd. My notes became even more important as I ventured into that landscape. Learning how to adjust in those ways was the finest education I had ever been a part of, and it happens in real time on those pages.

For the next 15 years, at City House and Margot Café & Bar in Nashville, and at my pop-up that came to be known as Buttermilk Road, the notebooks were my most important tool. They were not, in the beginning, laminated sheets of typed formulas neatly organized in a three-ring binder, as they eventually came to be for the sake of a staff that needed to consistently know what my recipes looked like beyond scrappy notes. That came much later. These little notebooks were always in my pocket, on a table with cream spitting from the stand mixer or eggs being whisked or cake batter being weighed. They were never precious. They were functional. They were, essentially, my brain—doodles and splatters and stains and all. Sometimes I wish they were neater, but then they wouldn’t be as honest. They helped me keep myself straight, hold myself accountable, remember details. By the time I got to Husk, I had an arsenal of recipes. I arrived at my first meeting with Sean Brock with a satchel of notebooks that contained my pie dough recipe, buttermilk pie recipe, caramel and “church cake” recipes, cast-iron upside-down cakes, biscuits, and a bag-load of other treasures that I was ready to find a place to serve. My hand pies were fundamental in this repertoire, perfect little things that people came to love, filled with whatever fruit or savory filling that was in season. Through the notebooks, I had built a solid foundation of basics that I felt I could do anything with.

Twenty or so years after I started that first notebook, I am back in my own kitchen, having left the restaurant arena to focus on my memoir, Our Lady of Perpetual Hunger, and other cooking and writing projects. My notebooks have become sacred totems to me, their scratchings nearly memorized. I can always recall the color of ink, the doodles in the margins, the color of the cover, or the lack of a cover if it had fallen off. When I think about my cornmeal cake recipe, I imagine the notebook it is in, what kind of ink it was written in, and I can see the recipe in my mind as soon as the page comes into focus in my memory.

When I read them now, in their collective pages I can see not just the evolution of my recipes, but the trajectory of my work. In the beginning, there is the harried young woman desperate to make a buck from something she believed in, eschewing the desk job so she could be home with her children, trusting in herself enough to commit to a craft and having faith in the work her hands could do. I see her growing in confidence, becoming a pastry chef with a style and a voice.

I can see how I developed a style of dessert that became my signature: simple cakes and pies and puddings, with salty crunch and beautiful buttermilk cream; simple, simple, simple, but with articulated flavors. All this simplicity was hidden behind years of practicing French pastry creams, quick lamination techniques, and gelatin firming ratios. The tricky thing about simplicity is that you really have to know your shit. There is nowhere to hide when you partner with simple. I knew I was never going to be fancy, write formulas that included Versawhip and emulsifiers, or make fussy garnishes. But, with any luck, I would be good. Watching a professional emerge from the pages, I feel a distilled sense of pride and gratitude for the opportunities presented to me and for myself for showing up for them.

All these years later, my recipes are practically muscle-memory recipes. I hardly need the notebooks to make them, even though they are all dutifully cataloged and saved, however sterile and uninterestingly, on digital files and between acetate sleeves in clean, white binders. Those live in my office. But the notebooks, the handwritten words, the soiled and stained covers and torn pages and faded writing, those are still tucked next to my rolling pins and knives in my kitchen. There are still more pages to fill. 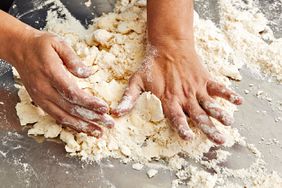