This gumbo from chef Donald Link owes its flavor to the roux, a mix of flour and oil that's cooked until it's coffee-colored.

This renowned baked oyster dish was created at Antoine's Restaurant in New Orleans in 1899 by the proprietor, Jules Alciatore. According to legend, the dish was created as a substitute for baked snails, which were hard to obtain from France. It was named in honor of John D. Rockefeller, at that time one of the world's richest men, because of the sauce's intense richness. The following recipe is the old Delmonico restaurant's take on the dish, with the Rockefeller sauce base used not only to make the Oysters Rockefeller appetizer, but also used as a spread on toast to create canapés.

Spicy and Sticky Baby Back Ribs

To create the flavorings for these ribs, chef Donald Link combines eight spices for a rub and prepares a barbecue sauce with homemade pork stock. An easier way is to cut back the number of spices in the rub to the five essentials, and use canned beef broth in the barbecue sauce.

Creole Shrimp with Garlic and Lemon

Eco-minded chefs are cooking with wild American shrimp, but not just for ethical reasons. As Tory McPhail of Commander's Palace in New Orleans says, "They taste cleaner and crisper, since they swim in the tides."

The mix of fresh crab, avocado and juicy heirloom tomatoes here is a classic combination. But Sue Zemanick makes it seem new by tossing the salad with a vibrant, spicy dressing spiked with jalapeño. 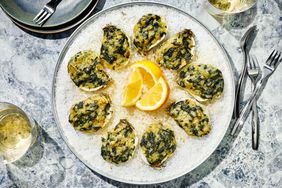